The 1906 built PumpHouse Theatre is located in the picturesque Killarney Park which sits on the edge of the equally beautiful and intriguing, Lake Pupuke. The PumpHouse operates as a venue for hire for the performing arts. It hosts a wide range of theatre, from plays, musicals, dance, stand-up comedy and many other kinds of events.

But those who find themselves in the PumpHouse Theatre alone at night have reported a presence in the building.

Is a resident spirit of the theatre awaiting their cue to take centre-stage?

About the virtual tour

We’ve partnered with Muse3D, one of New Zealand’s leading providers of full-immersion, virtual reality tours for the real estate, tourism and commercial industries.

The Matterport Scanner doesn’t take photographs, or video, instead it scans a property, which in turn, creates a fully immersive, virtual tour which allows you to tour the haunted locations we investigate. All from your computer, phone or in virtual reality!

Meta-tags highlight areas of interest; the reported activity, our experiences there and any relevant information. Later there will be video snippets included to feature captured evidence etc. These will be added to with each investigation session, so it’ll always be up-to-date.

Taken from Our Ghost – The PumpHouse Theatre

Many people have reporting a feeling of being watched, missing props (only to have them return a few minutes later) and the flash of someone watching from the Stage Right wings […] Most people think its a friendly visit from Peg Escott, [who was] involved with the saving of the PumpHouse building and its re-birth as a theatre. She was a founding member of the trust board […] As a tribute to her an offstage green room The Peg Escott Green Room was built in 1978. It is in this space that some people say they have felt the presence of Peg still.

As you explore the PumpHouse Theatre, do you sense the presence of Peg? Or can you tell who might be lurking the catwalks above the theatre? Can you put a name to the figure seen seated in the back row?

The Haunted Auckland team have spent quite a few investigative sessions in the theatre trying to make some sense of the alleged activity. The team have had experiences in our time investigating there (seeing moving shadows and hearing footsteps above, with no one present). At this point we have more questions than answers, so the case is ongoing.

Let us know in the comments below if you sense anything in any of the locations indicated in the virtual tour, or anywhere else in the theatre. 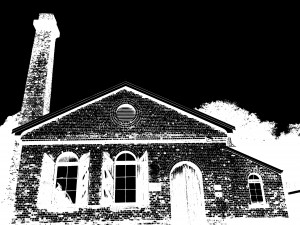