When my daughter turned one, we moved into a deceased estate, complete with a wildly overgrown garden, multiple extensions and the smell of a year of emptiness. Despite that, the house felt warm and welcoming and we continued to smile and say that we couldn’t believe how lucky we were to have such an amazing home.

We lived there for about a year, contentedly tidying the gardens, and watching our daughter grow. One morning, I woke at dawn, facing the bedroom door and noticed that it seemed to be slowly opening inwards. I watched for what felt like 30 seconds and confirmed that it did seem to be moving! I rubbed my eyes to check I wasn’t dreaming, then turned the light on my phone and continued to watch. The door opened completely, remained open for what felt like a few seconds then slowly closed completely, with the quiet click of the lock. Thinking it odd, I made a mental note to follow up later in the day, then rolled over and went back to sleep!

That afternoon, I spoke to my friend in Australia who “just knows things”.

She had visited a month prior. I asked her outright if she had sensed anything when visiting my home. Her response shocked me; “oh the ghost in the nighty? Yeah, she’s lovely”. She continued to tell me that the ghost lady would walk past my daughter’s room, look in and check she was sleeping, then move to our room, check on us, then walk up the hallway before disappearing up some stairs above the washing machine. She told me she was a kind woman who loved having a family round and that’s why the house felt so warm and welcoming to us.

Keen to know more about the previous occupants, I went to the council, but like many cases, the older files had been lost in a fire and the records only went back to the 1950s.

I posted on a local Facebook site, asking if anyone had any idea how to find out about the previous occupants of a house. That was where I met a lovely lady who offered to pop round to help me with my search. Upon arrival in my driveway, she cocked her head to the side, gazing at the paint chipped exterior of my bungalow with a puzzled look and told me “that’s weird… your house is showing me it has an upstairs?”

The woman walked around my home saying nothing. There were no photos up on the wall, nothing to give many clues about us to help her with a possible cold reading. All she knew was that I wanted to know about the past occupants. She then suggested that I record what she said, “as the words often come out really fast!” and boy was she right!

I sat trying to look a po-faced as possible as she told me about a young woman in a white lace nightgown, with a candle, who walked from the lounge, checking in on my daughter as she slept, then on us, before walking to near the washing machine. Back then, that area had stairs going upstairs to a second level where she slept. Her description was exactly the same as my friend. I asked if she had a name for the lady, I was told that the lady had a job for me to do and wanted me to work it out for myself!

I decided that I would check out the local museum, to see if they may have some old photos or information and made an appointment to talk to the Curator. I explained my situation somewhat guardedly – after all, who wants to admit that a ghost has sent you on a mission to find out who they are! By sheer fluke, or ghostly knowledge perhaps, the Curator’s father built the house next door to mine in the early twentieth century and as a girl, she had played in the garden of my house! She confirmed, that yes, my house DID in fact have an upstairs! However, the family that lived there at the time were the same people I had found on the council records. So still a dead end on the ghost’s name.

I started to talk out loud to the ghost lady, telling her about my day and asking for help when I needed to find items.

Often, they would appear within the next few minutes in an obvious place that I had already looked several times. I would regularly see a shadow out of the corner of my eye, but never felt scared. I tried to focus on a possible name for the ghost, often settling on the name Clara. But something told me that wasn’t quite right. Determined to keep on with my search, I began volunteering at the museum, so I had time to lazily search through old photos and records. That was how I discovered images of Clarence, the owner at the time the curator lived there. 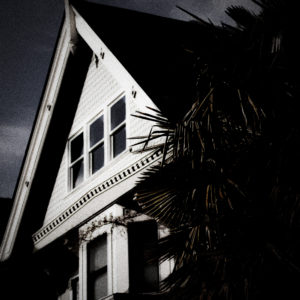 Across the road from my house was a lovely cemetery which I liked to meander through on a warm evening stroll. One day, I sat down on a bench to tie my shoelace. Upon looking up, in front of me was a gravestone – it belonged to Clarence and his wife, Clara. Until then, I had not known her name. I was initially excited to realize where the name had come from in my mind. But then I realized, I was no closer to finding the ghost’s name!

I returned to my home and as I stood looking out my bedroom window, talking to no one in particular, I realized that you could clearly see Clarence and Clara’s headstone from my home.

Further record searching suggested that Clara lived in the house until she died.

I asked my friend in Australia about Clarence and Clara and whether the ghost lady was his wife. Had I found out her name? No. I still had a job to do – but I was closer! I again looked through council records and historical documents and discovered that when the extension was placed on the back of our house, the roofline was lowered and widened – this was when the ghost’s bedroom was destroyed.

After seeing one too many horror movies, I decided the sensible thing was to crawl under the house and into the attic to see if I could find anything. Underneath the house provided some ancient rubbish and several scraped knees, but nothing significant. The attic revealed a false ceiling above the bathroom and hallway, the walls still had very-old floral wallpaper on them. I sat up there, talking to the ghost lady and telling her about all I had found out about Clarence and Clara and the house.

The original part of the house was part of a separate lodgings building at a local public house as part of a historical legal spat between landlords. Once the pub was closed, a portion the size of my bedroom, was transported to the site and extended in the 1890s with a second room. It was extended again by Clarence in the early 1900s to add another 2 rooms for his growing family, a modern out-house and a sunroom. Finally, the kitchen and a fully internal bathroom were added in the 1980s. I suspected the ghost lived there in the late 1800s, directly before Clarence. Despite finding out all about the house, I still didn’t have a name!

A few years later, we moved out. I was sad to leave our resident spirit. I explained why we were moving and suggested that she might like to move towards the light, if that is what she wanted to do. I apologized that I still had not learned her name…but I would keep on searching. And I still do. And that job she wanted me to do? Well, I think I finally worked out what it was!

Earlier this year, I was invited to join Haunted Auckland, after following in the side-lines for over 6 years. And the first location I was asked to investigate? The local museum I had volunteered at!

I’d love to tell you that I have discovered her name, but I haven’t. But speaking to her and living alongside her, gave me a genuine innate understanding that all spirits were once people and should be spoken to as such. My job is to continue speaking to these spirits and finding out about their lives, their stories and messages, whilst appreciating, that we all live with the multiple pasts that surround us. And one day, maybe I will find out her name…but only when she wants me to!