Waitomo Caves Hotel was first originally called Waitomo House, then in 1905 the Tourist Department bought it & renamed it the Government Hostel. Waitomo Caves Hotel is situated upon a natural high-point in an area of limestone rock honeycombed with natural caves and underground streams. Many of these caves are regarded as Tapu (sacred) by the local Maori and are said to be inhabited by Taniwha, guardian or predator beings that live in deep pools in rivers, dark caves, or in the sea, and Patupaiarehe, who according to Maori folklore are pale-skinned spirit beings that live in deep forests and mountaintops in New Zealand and who are said to lure people to their doom with ethereal flute music and singing. The Maori have historically used the caves as a burial ground. 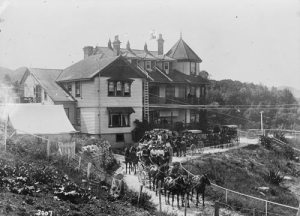 The Maori occupation of the land dates back to 1350, with 2 massive battles fought in the area, as well as localised skirmishes between tribes. This area was also the site of the battles between the Maori King Movement (Kingitanga) and the British Army. Waitomo Caves Hotel is built on the site of a British Fort, that was used during the these battles, due to its defensible position, and foreboding slopes.

A legend of the Maori princess dates from the Kingitanga versus Britain era. The daughter of a high-ranking Maori chief became enamoured with a British soldier, and one evening, while making her way up to the fort for a romantic rendezvous with the solider, she was mistaken for a warrior by one of the British sentries and was shot dead. Her spirit is said to haunt the Victorian wing of the hotel which houses the Honeymoon Suite. She has also been reputed to taking up residence in a particular hotel attic, and her moaning can be heard coming from this area.

The story of the Ghost of Room 14 relates to the tale of the Maori Princess. A young male guest at the hotel, felt what is reputed to be her spirit passing through him, and after telling the tale to several guests staying at the time, he retired to his room and committed suicide. He is said now to wander the corridors as well. Hanging is commonly said to be his method of choice, however, in Room 14, it is said to that the bath has been seen dripping with blood. The adjacent Room 12 is also said to be frequented by the princess, with moving lights reported in the en-suite bathroom and guests having bed sheets pulled away and toes tickled during the night.

The ghost of Cat Alley is attributed to an accident that happened in the 1930s. Cat Alley is a cluster of small rooms and corridor, which catered to the workers and maids. It connected these rooms to the kitchen and restaurant. One night, a boy (one of the maids boys that was smuggled in at night) was skipping through the kitchen and knocked over a pot of boiling water, that burned him so badly he died. The staff have been calling him Daniel. He is said to be heard giggling, skipping and children often complain about being followed by a weird boy.

Room 12a (a common hotel euphemism to avoid rooms and floors numbered 13) is reputed to be a hotbed of activity, with footprints forming on talcum powder spilt on the ground and objects being moved about. Room 25 is an area the staff don’t like to go to, with reports of bad feelings, screams and further movement of objects. This room is said to be associated with a former staff member or Matron who is said to still try to keep order in the hotel’s Art Deco wing. 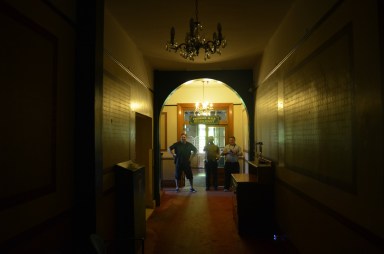