The PumpHouse Theatre is located in the picturesque Killarney Park which sits on the edge of the equally beautiful and intriguing, Lake Pupuke. The PumpHouse operates as a venue for hire for the performing arts. It hosts a wide range of theatre, from plays, musicals, dance, stand-up comedy and many other kinds of events.

But those who find themselves in the PumpHouse Theatre alone at night have reported a presence in the building.

Is resident spirit of the theatre awaiting their cue to take centre-stage?

History of the area

Lake Pupuke is a heart-shaped freshwater lake formed around 140,000-150,000 years ago, occupying a volcanic crater between the suburbs of Takapuna and Milford, on Auckland’s North Shore. The heart shape is a result of a formation by the linking of two circular craters.

In Maori folklore, a myth surrounding the lake tells of a tupua couple, the children of the fire gods, quarrelling with Mahuika, the fire-goddess about their home on the mainland being destroyed by Matahoe, a god of earthquakes and eruptions, sent by Mahuika. Lake Pupuke resulted from the ensuing destruction, causing Rangitoto Island to rise from the sea. The mists surrounding Rangitoto at certain times are considered the tears of sadness from the tupua couple, grieving for their former home.

A lake of mystery

The lake itself holds much dark mystery and intrigue. Through the years there have been many unsolved deaths in Lake Pupuke. Experienced, physically fit divers have been pulled up dead from the murky depths. Swimmers, young and old, mysteriously drowning without any obvious or logical cause.

Then there are the stories of the Lake Pupuke Monster!

Those that have seen it say it is grey (or green), smooth and very large. Whatever it is, it is large enough to capsize kayakers, attack a dog out for a swim and pull birds under. A couple of sightings which made the news, described something that looked like a tractor tyre tube submerged. However, this theory has been scoffed at by those that have laid eyes on the creature. Also put to question, is how a rubber tyre tube could float, at surface level, upright in a vertical position? Would it not float on its side, if it was an inflated tube?


In 1894, a pump house was built on the shore of the lake to supply fresh water to the local area. From 1905 the building housed a furnace which energised an enormous pump that shifted water from the lake to the early settlers of Devonport.

This was replaced in 1906 by a second pump house. As a result of increasing demand, the water level of the lake fell and the use of the lake as a fresh water supply was discontinued. In 1941 when the Waitakere Ranges became the source of Auckland’s water, the pump house was decommissioned. Thereafter it was neglected and gradually fell into disrepair.

The second pump house became a protected Category two building under the New Zealand Historic Places trust in 1983 and is to this day maintained as a theatre with three performance spaces including an outdoor amphitheatre.

A spirit in the wings?

It seems the theatre has (as most theatres seem to have) its own resident ghostly resident.

It is believed by those that work at the theatre that the presence is that of one Cicely Margaret Escott – more commonly and lovingly referred to as “Peg”, whom served on the Mairangi players committee and directed, sang and acted in many plays, until sadly committing suicide at Takapuna Beach. Her body was found in the Waitemata Harbour on 15 August 1977.

There have been reports of objects being moved from one spot and turning up in another when no one else is around, shadows seen out of the corner of their eye and a general feeling of never being alone and often feeling watched when alone in the building. Actors have experienced the sensation of being pushed at the top of stairs, shadows have been seen and lights have mysteriously blown.

During a production of “A Skull in Connemara”, people reported seeing mysterious movement and shadows in the theatre. The area of the alleged sightings has also had a number of unusual alarm sensor movement detections late at night.

Footsteps were also once heard in the ‘Lake View Lounge’, above the main office. 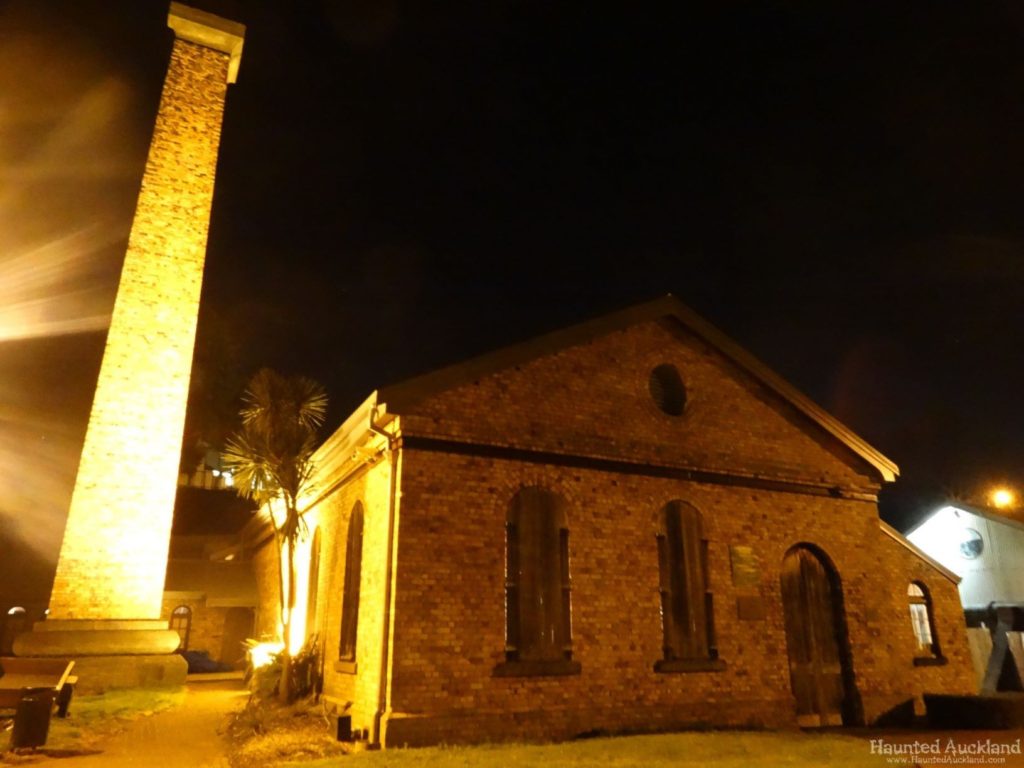 Various psychic mediums claimed they had identified a spirit with “a short name like Tim, Jim, Tom” who “lives” on the right-hand side of the stage – dressed in 1900’s clothing – possibly unemployed and looking for work during construction.

More recently a much-loved caretaker (and enthusiastic jump-in acting extra at times) for the theatre, passed away. Since his sad departure, there have been a few occurrences within the theatre that no one has any explanation for. A cleaner’s cupboard is sometimes found by staff, with its door open and the cupboard contents pulled out and cleaners items strewn around. The cupboard and its contents were used regularly by the Caretaker, hence he is suspected to be the mischievous culprit. Perhaps he is still residing in and maintaining the theatre in his afterlife?

In 2015, security cameras captured two large doors leading out into the courtyard, bursting open in the early hours when the theatre was locked up for the night. The force being so intense it damaged the strong metal lock which needed replacement. I spent some time there, trying to find a rational reason for the doors to move as they did. All the reasonable explanations like draughts, faulty locks etc were ruled out. A draught with that much focussed and direct force could not have been generated in the building due to the room layout of the theatre’s interior.

The Haunted Auckland team have spent quite a few investigative sessions in the theatre trying to make some sense of the alleged activity. The team have had experiences in our time investigating there (seeing moving shadows and hearing footsteps above, with no one present). At this point we have more questions than answers, so the case is ongoing.

…and then there’s the reports of UFOs and strange lights seen hovering over the lake. but that’s another whole story right there!

Have you had any ghostly experiences at The PumpHouse Theatre? We’d be keen to hear your stories! Leave a comment below if you have a tale to share about this location.