Mark Wallbank is an independent, as well as team-based researcher and has been mad on everything Paranormal, Extraterrestrial and Crypto-zoological, since early childhood.

When not creating electronic music, Photography, writing articles, reviewing music, watching Horror movies and documentaries, collecting skulls, fossils, dead creepy crawlies and adopting unwanted allegedly haunted items, doing event promotions work,(as well as working a full-time day job) I have spent countless hours investigating, exploring and furthering my research out in the field, either as part of a group or solo, since the early 80′s.

I am a loyal member of quite a few research organisations around the world that I look to for guidance, education, and networking.

I’m a decade+ long member of the somewhat prestigious Ghost Club; founded in 1862 in the UK and recognised as the world’s oldest organisation associated with psychical research, The Society for Psychical Research (SPR – 1882),  ASSAP – The Association for the Scientific Study of Anomalous Phenomena; a UK-based education and research charity, The Parapsychological Association, established in 1957, an international professional organization of scientists and scholars engaged in the study of psi (or ‘psychic’) experiences, such as telepathy, clairvoyance, psychokinesis, psychic healing, and precognition. The Australian Institute of Parapsychological Research, and to keep myself grounded I’m also a member of  NZ Skeptics.

Around 1983, a couple of friends and I formed the Auckland Ghost Hunting Group. We would spend our weekends roaming the abandoned ruins of farmhouses and deceased factory buildings, scattered around the as yet undeveloped farmland of early Howick and Pakuranga, as well as many a night sitting in cemeteries around Auckland, armed with a tape cassette recorder and cameras. The group disbanded within 3 years, as members grew up, got jobs, and moved into different suburbs. So, refusing to neglect my passion, I spent the next 20 or so years conducting my research independently, around New Zealand and abroad.  In this time I co-organized and attended a few meet-up / discussion evenings, as well as had a few of my photographs displayed as part of an exhibition of NZ-based dark art & photography.

In 2010, I decided it was time to get back into investigating as a team. There was something about being able to share the experience with others, that I missed. 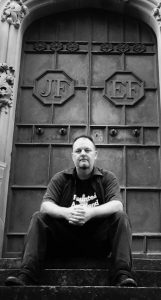 My research has led me all over New Zealand as well as much exploration and investigation internationally and have clocked up around 40 odd years of out-in-the-field experience in my time. I have given many talks at paranormal events around New Zealand, Australia and the U.K.

I have written three books on the paranormal subject, Voices in the Walls – Living the Paranormal in New Zealand.
Talking to Shadows – A New Zealand Paranormal team’s search for answers.
Haunted New Zealand Road-trip – In search of Paranormal Activity (New Holland Publishers), plus many articles and reviews for numerous print and online magazines and books through the years.

I don’t consider myself a ”believer”, more an open minded agnostic who has experienced enough in my life to realise that there is definitely something to all this: it isn’t all delusion, and research is very much worthy and valid.  I am proud and privileged to lead one of New Zealand’s most recognised and active paranormal research and investigation groups, Haunted Auckland.

“I believe some things just can’t be measured by science alone. It pays to have an open mind but also to think logically, even if it means straying outside the proverbial box.”