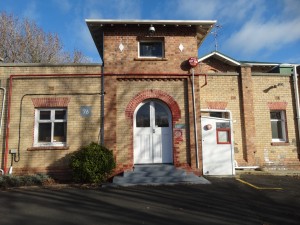 Unitec was founded as “Carrington Technical Institute” in 1976 on the Mt Albert site on Carrington Rd, which has 55 hectares of grounds.

The area on which Unitec’s main campus is located was formerly home to the Whau Mental Hospital, later known as Carrington Hospital.
The hospital was decommissioned during the early 1990s, and the building is now part of Unitec’

Building 76 was once a male ward for the most dangerous patients.

It was also known as the Whare Paia Maori mental health unit and was run by Titiwhai Harewera untill she was imprisoned for nine months, for assaulting patients under her care.

The small white cell rooms, still sealed by the original solid (thick glass viewing panel adorned) steel doors, used to hold the most violent and dangerous patients. These are now utilised by students to work on their individual art / graphics assignments. 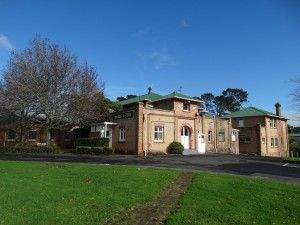 In the past there have been reports of ‘furniture moving in the seminar room at the end of the long upstairs hallway’, moving shadows, the sound of children singing and laughing, various items being moved to different parts of rooms, students being pushed….. 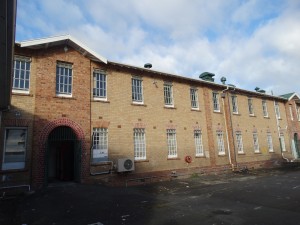 During my time in this building I noted two incidents of EMF fluctuations and apparent moving energy fields outside rooms in corridors. No reasons or sources could be found.

At the same time an icy chill filled that area of corridor.

Unfortunately I did not have my thermometer at the ready to measure the actual temperature at that point. 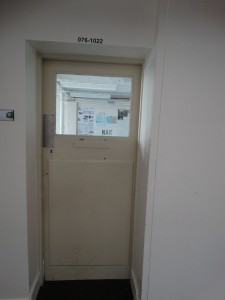 – Outside room 076-1044 : Energy field appeared to suddenly form. I am unsure as to whether if it truly did ‘appear’, or perhaps just moved to that position. Either way, I am sure that it was not there one moment, and then it was.

EMF meter went from 0 to ‘off the scale’ in a second, lasting for about a minute then leaving. Appearing again, a few seconds later, about a meter further along the corridor.

The small energy field was tracked from rooms 076-1044 down the corridor to outside room 076 – 1048, where it disappeared. Tracked for about 5 minutes total. 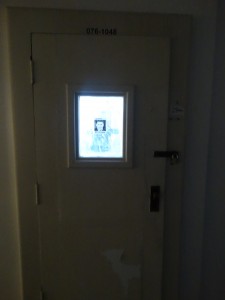 I estimated at the time that the ‘ball’ of energy would have been roughly about a foot or two in circumference. Not visible to my eyes, but definitely measurable.

EMF was very flat throughout the building except for in the areas of wall mounted power boxes, computer filled rooms and alarm systems.

– A couple of EXIT signs showed high EMF readings. Nothing unusual.
– A power box also typically gave off an extreme reading on passing.

In a hallway I briefly smelled cigarette smoke. Thinking it was coming through an open window, I exited the building and walked all around the exterior looking for the culprit. There was no one around and no smell of smoke detected outside.

3 x 10 minute communication attempts – Nothing found on audio analysis except two segments where students are heard talking out in the carpark.

I intend returning to Building 76 in the near future to conduct further investigation and research.
If anyone has had unusual, possibly paranormal, experiences within Building 76 of Carrington Unitec, please make contact so we can add your information to our records.