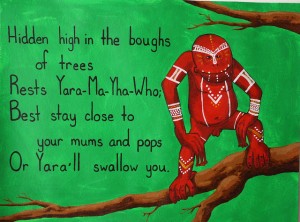 The Yara-ma-yha-who is a creature from Australian Aboriginal folklore. This creature resembles a little red man with a very big head and large mouth with no teeth. On the ends of its hands and feet are suckers. It lives in fig trees and does not hunt for food, but waits until an unsuspecting traveler rests under the tree. It then drops onto the victim and drains their blood using the suckers on its hands and feet, making them weak. It then consumes the person, drinks some water, and then takes a nap. When the Yara-ma-yha-who awakens, it regurgitates the victim, leaving it shorter than before. The victim’s skin also has a reddish tint to it that it didn’t have before. It repeats this process several times. At length, the victim is transformed into a Yara-ma-yha-who itself. According to legend, the Yara-ma-yha-who will only prey upon a living person, so (hypothetically speaking) you could survive an encounter with this monster by “playing-dead” until sunset; the creature only hunts during the day.