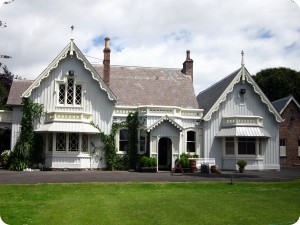 Highwic is a historic house in Epsom, New Zealand that is registered by the New Zealand Historic Places Trust as a Category I structure and is also one of AA Travel’s “101 Must-Do’s for Kiwis”.

The site has been made available for wedding, photography, filming or catering services.

Highwic is a mansion of Carpenter Gothic design that was built for a wealthy landowner.

The building was erected in an elevated position looking out over the nineteenth-century township of Newmarket. 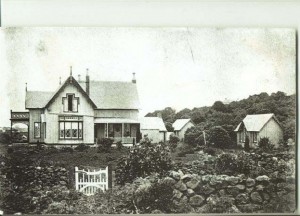 In 1862, the land was purchased by Alfred Buckland, whose family made additions to the structure. The house was enlarged during the 1870s and 1880s as the Bucklands family grew bigger and they became richer. The building included a large room that could be used for balls, seven bedrooms and a boy’s dormitory with outside stables, a coach-house, a billiard room, many other garden structures and a service yard. Family descendants who lived in the house until 1978 made alterations of their own.

The property was then jointly purchased by the New Zealand Historic Places Trust and the Auckland City Council because John Stacpoole and the then-Minister of Internal Affairs planned one evening to save the site from subdivision. 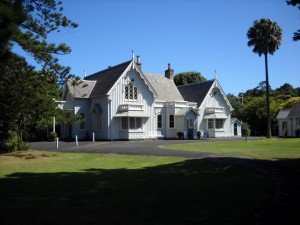 Highwic was opened as a historic house museum in 1981.

A reception for the Duke and Duchess of Kent was held at Highwic in 1980.

In 1985, an exhibition known as “The Twelve Days of Christmas” involved Christmas items such as old fashioned themed-decorations, Christmas cards, Christmas trees, carol singing, floral arrangements and wreaths in addition to antique dolls and toys.

There was also a display explaining Christmas legends and symbolism, as well as a gift shop. A Norfolk Island Pine was covered with eight hundred lights on the grounds. On a few occasions, there were also candlelit rooms.

In 2012, year-long celebrations were planned to celebrate the 150th anniversary of the building including high tea at the house, seeing a collection of Victorian costumes and floral arrangements as part of the Festival of Flowers plus music and arts. 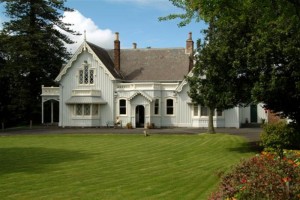 The concert A Song Without Words celebrated the work of students of Felix Mendelssohn in the ballroom.

Highwic is considered by some to be one of the “spookiest” places in Auckland as there have been claimed sightings of a ghost in a bedroom.

It is also said to be the home to a ghostly canine.

Spokeswoman Cheryl Laurie says “People have seen a black dog running across the garden to the boundary of the property.”
The Bucklands were known to be dog lovers, and would have had many dogs.

The dairy cellar is also a paranormal hot spot. “Many people sense the presence of a child in there,” says Cheryl.