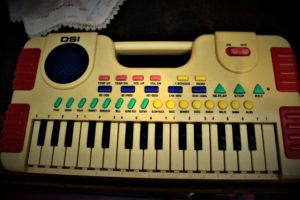 This is one of the more intriguing of the allegedly haunted objects passed on to me through the years.  It’s a small plastic DSI electronic organ keyboard, given to me around 2007 via a work acquaintence that knew I had an interest in this kind of thing and thought I’d like it.
Unfortunately I couldn’t find much information online about these toy keyboards; not even a manufacture year.
From Amazon.com…. “Stimulate your child’s imagination and encourage creativity as a variety of musical experiences. This is a great learning function used for kids of all ages. Fun music & sound effects enhance auditory skills. Kids love it. Get your children into the joy of the music world! Requirements: Requires 4 x AA batteries.”
This was  given to me by the son of an elderly couple that purchased and moved into a unit, as their family had all moved on and they no longer had a need for a large high maintenance home anymore.
They moved into a unit at the end of a block of three in the South Auckland suburb of Manurewa.
A simple, one level, brick and tile home that suited their needs perfectly. One night, during their first couple of weeks in the new home, they were in bed when they heard a distant sounding tune being played.  It sounded like a children’s toy playing a nursery rhyme. They initially just assumed it was the people in the unit next door, so thought nothing more of it.  It would happen nearly every night, usually around 8 or 9pm and play for only about 5 minutes.  They soon realised that the sound was not coming from next door, but was infact coming from directly below them;  underneath the flooring.  Pressing their ears against the Kitchen lino floor they soon confirmed that it was indeed coming from under the house. They called their son  to crawl under the house to have a look the following weekend.  He emerged, covered in cobwebs and dust, pulling out an old rotting cardboard box.  It didn’t contain much. Just a few old newspaoers and a couple of New Zealand Woman’s Weekly magazines, dated around the 1970’s.  Also in the box was this keyboard.  A dust covered toy.  This must’ve been the source of the music.  Odd thing though, there were no batteries in it.  It was missing it’s battery housing cover and was empty.
How the keyboard was making the tunes, I don’t know.  I later realised I should’ve asked a few more questions.  Mainly based around whether or not there might’ve been the possibility of live electrical wiring hanging directly over, close too, or touching the toy….possibly making some sort of connection and triggering it during a power surge, perhaps.  It’s the only thing I could think of.
Whilst in my possession, I think I may have heard it playing a tune once, but I’m not sure.  I have all my research items closed up in a room upstairs. One evening whilst I was watching TV downstairs , I thought I heard the familiar chirpy sounding tune, but as it was so quiet, being distant and in a  closed room, I’m unsure if it might’ve just been the TV at the time. I went to check, but heard nothing on entering the room.
I would be interested to hear from anyone that has a similar keyboard or has experienced something  like this.  Also, if anyone knows if my wiring cable theory is even possible or can offer a more plausible explanation.