Just recieved this book in the post. It’s a story I’ve loved for a while now, as tells the chilling folkloric 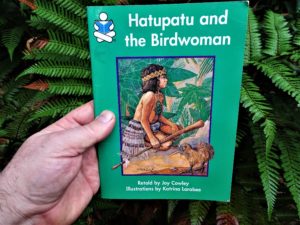 story of human interaction with a mysterious and terrifying creature.
Written and published in 1982 by Joy Cowley and beautifully illustrated by Katrina Larabee.
In Māori tradition, Hatupatu (or “Hatu Patu”) was the youngest of four sons, cruelly treated by his elder brothers, who despite this grew up to become a chief of some note among the Te Arawa. Legend tells of his wily escape from the bird-woman Kurangaituku, by hiding inside a rock and then leading her into a boiling mud pool.
During a team roadtrip on our way to an out-of-town investigation, we stopped off to visit this iconic landmark. Te Kowatu O Hatu Patu also known as The Rock of Refuge. The rock stands at the roadside near Atiamuri, about 26km south of Tokoroa.
https://hauntedauckland.com/site/te-kowatu-o-hatu-patu-rock-refuge-waikato/
There’s also this great animation that depicts beautifully the story of Hatupatu’s terrifying ordeal with the Bird-Woman creature.
https://www.youtube.com/watch?v=fRaflfPsWyg&app=desktop.