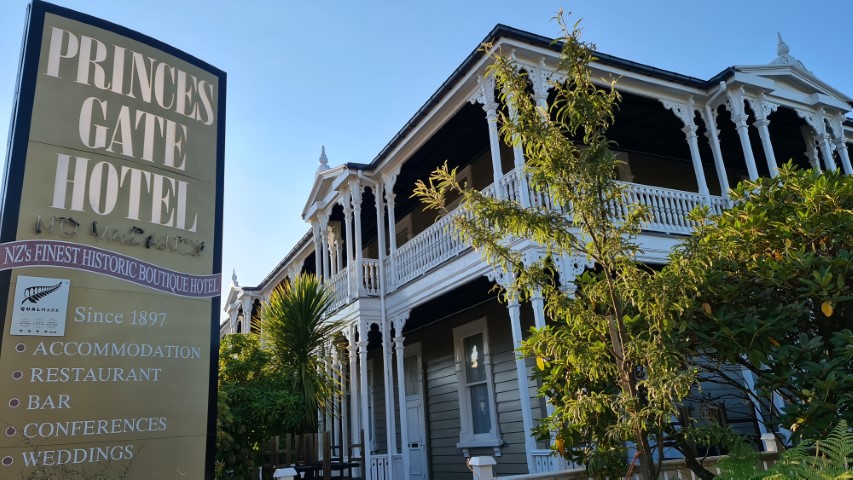 On Feb 27th 2021, Mark, Sam, Aimee, Barbara and Natasha, piled themselves and a heap of equipment into two cars and made their way to beautiful Rotorua to spend a fun day & night taking in the sights, eating Mexican food, visiting the thermal areas and investigating the allegedly haunted Princes Gate Hotel.

In the early 1900’s, Waihi was a thriving town, the third largest in New Zealand (after Auckland and Wellington). Waihi is home of the of the Martha Gold Mine, then the richest in the world. Many hotels and public houses sprang up to cater to the demands of the miners and visitors that occupied the town. One of the finest of these establishments was the New Central Hotel, later to become The Prince’s Gate Hotel. Built by Mr E. Morgan, it had 75 bedrooms and very quickly became well known for its superior qualities. Visiting mine officials enjoyed the excellent hospitality shown by the first proprietors of the hotel, Mr & Mrs M.G. Power. Many distinguished names began to appear in the hotel register and the biggest weddings and social functions were held at the hotel. Due to Waihi being the railhead it was a popular stay over for visitors to the Bay of Plenty who could then travel on to Tauranga by coach. After Mr & Mrs Power left the hotel their daughter Nellie Budd and her husband took over as proprietors. Mrs Budd, a member of the operatic society, had a beautiful voice and would often entertain her guests with her singing. After leaving the hotel Mr Power later became the mayor of Waihi. Sadly, both he and his wife died from the influenza epidemic sweeping through the region in 1918.

In 1906 the hotel was purchased for nearly $9,000 by Mr Moss Davis, father of Sir Ernest Hyam Davis a New Zealand businessman and Mayor of Auckland City from 1935 to 1941. He was also on other Auckland local bodies, philanthropic and sporting organisations.

There are stories from a few of the rooms of unusual occurrences through the years, but the main room we were focusing on was Room 35, which is supposedly occupied by a female ghost that likes to seduce single men.

Did we experience anything? Maybe.

Let’s just say something happened at 5am, that was captured on camera.

The room key, sitting on a table, moves and drops to the floor at 5am.

Rotorua is known for its geo-thermal activity.

The only explanation we have so far been able to come up with is possible infrasound. However, if the cause were underground vibrations, wouldn’t the visible lens flare from the tripod mounted Infrared camera and lights have moved as well? The lens flare remains completely static throughout the entire length of the recorded camera footage.

Wouldn’t there be a slight vibration seen if it was strong enough to move the keys?

Of course, we don’t have enough evidence to conclude that this was indeed paranormal activity, but we found it interesting, intriguing and worth documenting.