Haunted Auckland was invited to investigate the various unusual activities allegedly occurring in an iconic Onehunga based establishment, built in 1912.

The owner has asked that we do not divulge the location of the building and as we respect the wishes for the privacy of our clients, we have trimmed this report of any private details. The owner has also requested that all staff comments are kept out of the published final report.

Through the years many staff members, as well as guests, have experienced the sound of footsteps, sometimes walking, sometimes running, down a short corridor leading from the back door, past the toilets, and towards the kitchen/service counter area. There have also been sightings of a girl wandering the building. She has been witnessed by both staff and visitors.

A heavy glass cake stand on the counter had fallen off, or was ‘pushed’ off, whilst the owner was there, close beside it, cashing up at the end of the night. Both staff and guests have commented on having strange feelings whilst in the room like they are being watched by someone. Feelings of overwhelming unease are also sometimes felt there. 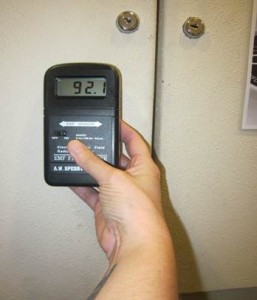 We arrived at the building at around 9 pm and investigated the building’s exterior and interior till 1 am.

On the night of the investigation the owners had also arranged a function for the staff and their families, so we were unable to obtain clean audio recordings during this session. All members conducted a full photographic sweep of the venue, inside and out, as well as checked EMF levels around the various rooms. Two static Night Shot video cameras were also set up to hopefully capture any unusual movement.

A small spy cam was positioned in the main eating area to monitor the room. One camera was set up downstairs in a room alongside a motion detector and balloons as trigger objects, the other up in the ceiling in a small storage room attic with a small illumination lamp to further light up the area.

In the hallway leading to the back door and toilets, there was a rather large power box which was giving off unusually high EMF readings. This, coupled with the drink fridge at the other end of the hallway, which was also giving off higher than normal electromagnetic readings meant that this area of the building was in fact overly saturated in electrical activity. High levels of electrical leakage have proved to be the reason behind many incidents of headaches, paranoia, insecurity, nightmares, stomach cramps, the feeling of being watched and an overwhelming sense of unease and physical sickness.

“There was the large amount of power coming from the power box and the fridge. Otherwise pretty clean inside and out. This could account for auditory and visual effects in those sensitive if they experienced anything in these areas as well as uneasiness.”

“I did not see, hear or sense any paranormal activity, but I did get a very uneasy feeling at the far end of the hallway (by the door to outside). I felt physically nervous and had the sensation of butterflies in my stomach.  (I did not feel like this anywhere else inside or outside the building).  There was also the noise that we all heard towards the end of the evening.  Although we all heard it and it seemed to be in the room I guess the building is old and so it could have been a creak??? (Not really convinced though).”

Nearing the end of the investigation, during a short EVP session in the library room, we were interrupted by the sudden loud ‘bang’ sound, but couldn’t make out exactly where it came from. It was sharp and very loud and was captured on two digital audio recorders. We looked everywhere for an explanation and to try to locate the source of the sound but were unsuccessful and could not find one that fitted.

To our ears it sounded metallic. A bit like a heavy metal door latch clicking into place. However the doors leading into the room had no such metal latches. The EVP recording of this sound is included in this report for the reader to come to their own conclusions as to what it actually is.

Until we re-enter the building for further investigation, or until it can be explained, the sound remains an anomaly.

The general consensus on the night was that while it is certainly possible there is something paranormal going on in the location; the investigation did not bring anything to light as conclusive proof for us.

However, due to all the distractions around the team, there wasn’t really a fair chance of being as in-depth and as thorough as we would have liked to have been. It is likely at the very least, that the building could contain some residual phenomena considering the great number of activities and people who would have been a part of its long public history.

Also, Strong electrical fields can undoubtedly cause unusual sensations in humans. Whilst we were there, more than one person reported the rear door area as being uneasy for them. Exposure to strong electrical fields may interfere with normal brain activity and produce occurrences of a seemingly paranormal nature. Until we can undertake a full, uninterrupted investigation of the premises, we cannot rule this option out.

Further investigation would be needed to fully understand and perhaps explain away the activity in the building we have been hearing about from the owner and staff.

The building is a tidy, well looked after piece of Auckland’s beautiful historical architecture and it was a pleasure to be allowed entry behind the scenes to see what makes her tick.