This urban legend has been circling for a few years now, but isn’t widely known. The location is Mason Road, in a small subdivision off Oteha Valley Rd. It’s in a newly developed section of Albany on Auckland’s north shore and the rumours are kept at a low whisper for fears the land might devalue if word got around.

However, those that have lived there a while know of it, though its thought of as being just an urban myth. A non event to some. 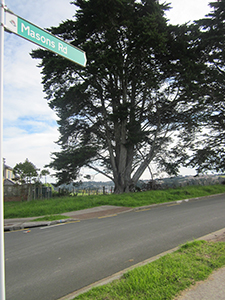 I spoke to one old man, Des, who was mowing his front lawn when I pulled up to take photos of the area. He told me he had lived there for about 15 years or so, back when it was mainly paddocks and farm land. He had heard something of the story, but didn’t know if it was true or not.

Yes there has been a couple of car accidents up that road in the past. He attributed it to “young Petrol-Heads” heading out that way to drink due to the area being quite low lit and isolated and misjudging the corner at speed. There is also the North Shore branch of the Vintage Car Club headquarters on the land there, so perhaps this was attracting overly enthusiastic car enthusiasts?

Masons Rd runs up a small hill near the intersection with Medallion Drive. At the top of this hill stands an old Macrocarpa tree and the remains of an old farm fence. The old tree is allegedly haunted by a couple that died in a car accident on that corner, many years ago when the new developments had just begun. Rumours state that the couple were members of the Vintage Car Club, on that road.

Through the years following the accident there have been numerous sightings of the couple standing on the road or walking around the Macrocarpa tree. Residents of the homes beside the land apparently see the couple quite often. One claim is that ‘The ghosts are normally observed walking alongside pedestrians and are not necessarily differentiated from an ordinary member of the public.’

On one occasion, a resident in the apartment complex watched from their window as their daughter walked home with some friends from the bus stop down the road. When she entered the house, the parents came down to meet the visitors but their daughter was alone and claimed she had been since stepping off the bus.

On the tree where the alleged accident occurred there are grey paint markings on the tree trunk. Was this a marker to show where the car hit? Notable damage (though now ‘healed’ with a new growth of bark) can also be seen around the base of the trunk indicating that something had indeed happened there many years ago.

The ghostly couple are said to be mostly seen in either the early evening or around dawn.

A few people have reported seeing them first -hand or have heard from others that have seen them.

“I was talking to my auntie just the other day about this! Apparently the accident involved two cars dragging each other off and one losing control and hitting the tree. My auntie told me she had heard people saying they’ve seen people standing by the tree and disappearing. They’re all black and you can’t see any faces. They just stand there and next minute they’re gone.”

“That tree has a weird feeling around it that I can’t explain. Like a headache and loud high buzzing in my ears that goes away when I walked away from the tree. I went to take photos one day as I live in the area and hoped I might capture something on camera.”

”My mate said he drove past one night and there was a girl sitting under that tree. It was about midnight and she was all alone with no light. I only saw her because my headlights lit her up as I went by. Strange!”

”I was out there one night with my friend and we saw a person that was all blacked out standing under the tree one night. Couldnt see his clothes or face, just all black. A shadow person?”