There is an old story that goes at least into the early 80’s, perhaps even much earlier, of a man who was found drowned underneath the Auckland Harbour Bridge.

It is thought that he had died after being either swept off his fishing perch by incoming rough water, or fell, hitting his head and drowning, whilst fishing in a spot underneath the North Shore side of the bridge.

There is a small jetty area for people to lock up their dinghies, park their cars to fish off the wall, or launch their boats into the water via a ramp.

To get to this area beneath the looming bridge above there is  Sulphur Beach Road, a thin, one car lane that passes by the local police station and winds around directly beneath the bridge to the other side.

There used to be the remnants of an old rusty structure, similar to a scaffolding platform, constructed beside one of the many enormous concrete supports holding up the bridge.

With age and sea water rusted steel and rickety planks of timber as a  standing base,  it is not clear what this platform was officially  created for. Perhaps left over from the actual construction of the bridge itself.

This rough and dangerously placed platform was used by many keen and brave fishermen that would  wade out into position as the tide was coming in and stay up there above water level until the tide receded so they could return to their cars.

We have heard that there are still small end bits of the steel legs sticking slightly out of the ground which were cemented into the foundation when built and sawn off at the ground level when it was finally removed many years later.

We investigated beneath the bridge at low tide and after much searching could not locate which pillar the structure might have been positioned beside.

We were unable to find the actual platform removal date records, but estimate it would have been within the last 20 years.

The Harbour Bridge Ghost is said to have been seen from time to time, floating just above sea level as a human sized dark shadow. His eerie dark form has been witnessed contrasted against the  grey concrete slab support as headlights from cars have been entering or leaving the area. According to the witnesses, the beams from car headlights do not eliminate the shadow which is still clearly visible over the bright lights.

He is also seen when the tide is out, wandering aimlessly around the pillars in the dark. The man seems to mainly appear during the low light of dust and early dawn.

We have not heard of any daytime sightings as of yet. 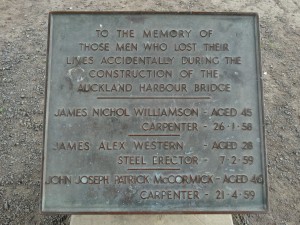 The hazardous nature of the work was highlighted by the deaths of four workers during the project.  A plaque commemorating these men who fell to their deaths is located under the bridge at Stokes Point on the North Shore. One alleged tragic incident of a worker falling into the wet cement that makes up one of the bridge support legs. It is thought the body still remains there as there was no way to retrieve him. We are yet to find any confirmation of this. Perhaps these stories are being confused with similar stories of tragedy, circulating around about the Sydney harbour bridge in Australia?

Haunted Auckland are very interested in the case of the Harbour Bridge Ghost and would like to hear from anyone with further information on the man, his death, or any recent or past sightings. If you know any more about this legend, get in contact with us.