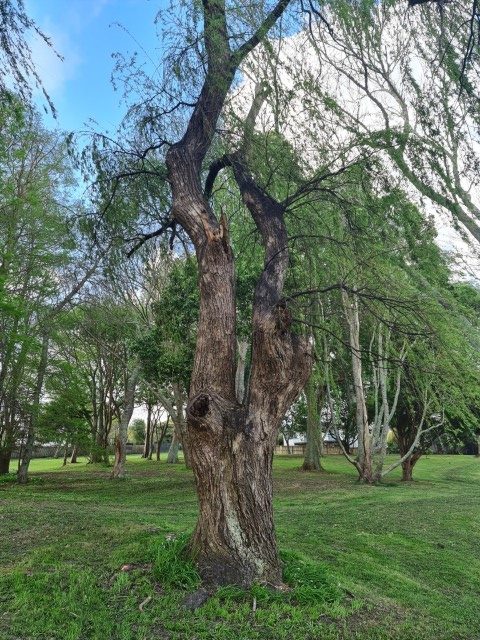 Since moving to the north shore of Auckland around 15 years ago, I’ve picked up a few intriguing local stories of possible paranormality and high strangeness around the region.

One was told to me back when we first moved here. I noted it, visited the area and took photos to try and document what I could at the time. Recently I heard the story again. This time I asked more questions and got a few interesting snippets of detail in return.

The area in question is Marlborough park; a public reserve with a playground, flying fox, tennis and basketball courts and skateboarding areas.

Prior to the opening of the Auckland Harbour Bridge in 1959, Glenfield primarily consisted of farmland. During the 1960s, as access to the area improved, many of the large farm properties were subdivided to provide space for residential development.

Around the rear perimeter of the reserve is a stunning mature grove of trees.

The stories revolve around just one tree in particular.

The reports are vague and lacking in much detail, but I have had it mentioned to me three times now, so whether true or not, the story (or urban myth) has been circulating for at least three decades. I am told of a young Chinese man, found hanging from a tree in the reserve.

It has been unclear whether it was a suicide or gang related as the details are based on dispersed rumours and point to both. One contact mentioned that it was kept quiet or covered up. How much truth stands in the information is unknown to me, but I find the story intriguing.

One connecting factor is that since that time, the figure of a person hanging from the tree has been seen through the years. Usually at dusk, as the light starts to fade.

Sometimes yelling or screaming is heard coming from the reserve at night. Though, being a public reserve, we can’t rule out the possibility of the yelling being unruly late-night party goers hanging out.

For a while after the tragedy, a piece of the rope remained attached to the branch. A morbid reminder, until the tree was targeted one night buy someone with a chainsaw, cutting the branch down.

Sometime after that the tree was attacked again, but by another arsonist who tried setting it on fire. The tree still stands to this day; though sad looking and blackened. With branches sawn off and only barely alive, it produces foliage on just a few of the remaining branches.

I am interested to hear from anyone that has experienced anything unusual in the reserve or has heard anything about the deceased man, or the apparent hanging ghostly figure seen from time to time.