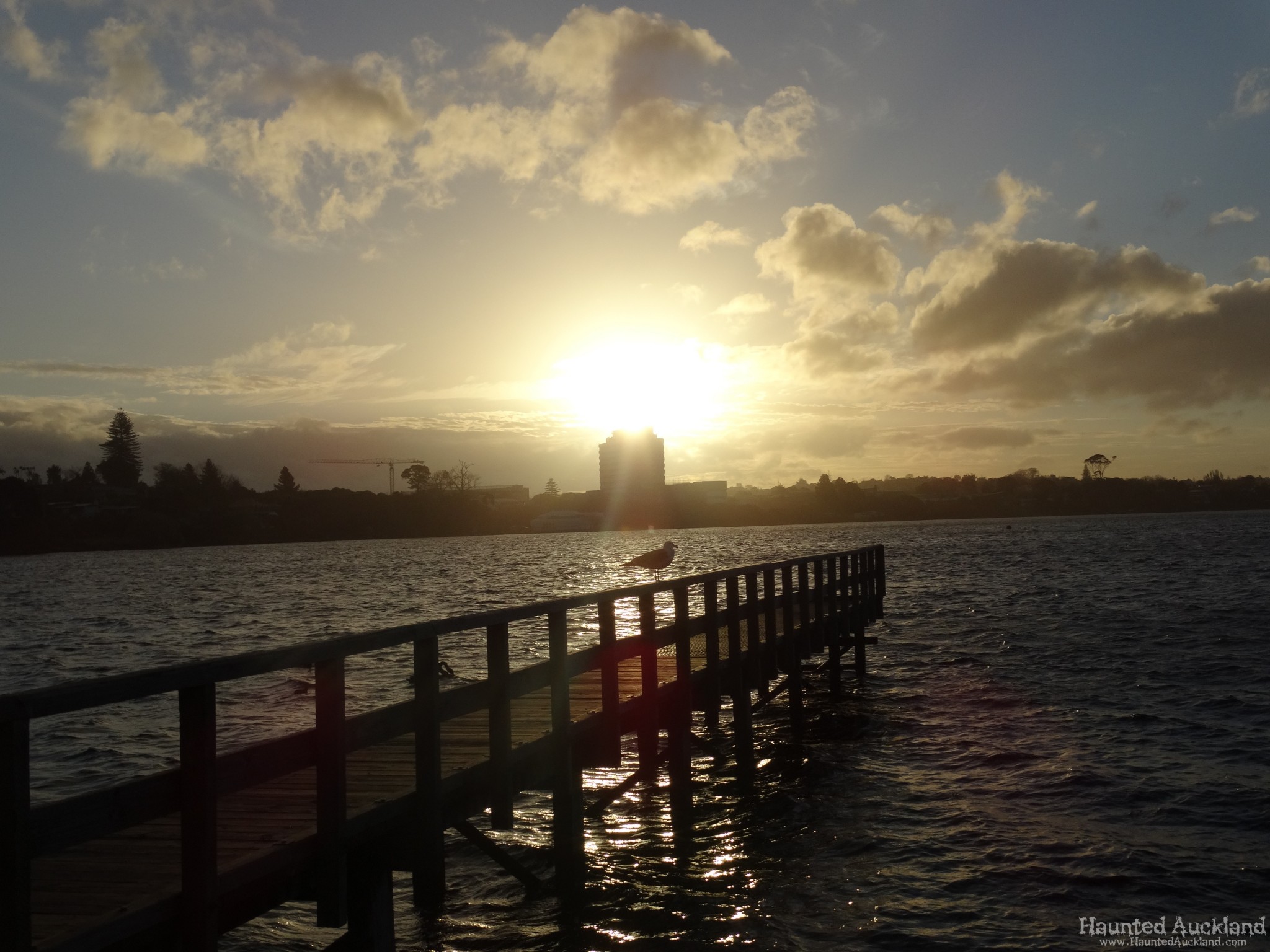 Lake Pupuke is a heart-shaped freshwater lake formed around 140,000-150,000 years ago, occupying a volcanic crater between the suburbs of Takapuna and Milford, on Auckland’s North Shore. The heart shape is a result of a formation by the linking of two circular craters.
In Maori folklore, a myth surrounding the lake tells of a tupua couple, the children of the fire gods, quarrelling with Mahuika, the fire goddess about their home on the mainland being destroyed by Matahoe, a god of earthquakes and eruptions, sent by Mahuika. Lake Pupuke resulted from the ensuing destruction, causing Rangitoto Island to rise from the sea. The mists surrounding Rangitoto at certain times are considered the tears of sadness from the tupua couple, grieving for their former home.
The lake itself holds much dark mystery and intrigue. Through the years there have been many unsolved deaths in Lake Pupuke. Experienced, physically fit divers have been pulled up dead from the murky depths. Swimmers, young and old, mysteriously drown without any obvious or logical cause.
Then there are the stories of the Lake Pupuke Monster!
Those that have seen it say it is grey (or green), smooth and very large. Whatever it is, it is large enough to capsize kayakers, attack a dog out for a swim and pull birds under. A couple of sightings which made the news, described something that looked like a tractor tyre tube submerged. However, this theory has been scoffed at by those that have laid eyes on the creature. Also put to question, is how a rubber tyre tube could float, at surface level, upright in a vertical position. Would it not float on its side, if it was an inflated tube?

These were two theories being advanced today to account for an incident this week on Lake Pupuke, Takapuna.
A Press Association message said Takapuna people who knew Lake Pupuke would give little credence to a report that a strange, large, green creature was seen in the lake on Tuesday. Mr B. P. Bond, former commodore of the Pupuke Boating Club, said tonight the “creature” could have been one of the outsize inner bus tubes the club used for marker buoys. “We have lost a number in storms,” Mr. Bond said “They broke away from their moorings. Now, partly deflated, a tube would be six feet long, quite wide and would float just below the surface. “The tubes are black and grey, but the colour could be affected by the green weed in the lake.”
Mr. Robert Porter, secretary of the Bowen Travel League, Queensland, said “the creature,” which he saw while rowing on the lake, was well over six feet in length and almost 12 inches across. “After I had rowed 20 or 30 yards from the shore the rowboat started to sway,” he said. “The morning was calm with no wind. “Glancing over the side of the boat, I saw a dark green object slowly following in its wake. I couldn’t make out what it was, but the manner in which it just glided along reminded me of the crocodiles back in Australia.
As the thing came closer I made a lunge at it with the oar but missed, and the object made a dive and disappeared under the craft. “I immediately rowed back to shore, but I had the sensation that the creature or whatever it was kept following under the boat. Before jumping ashore, I made another lunge at the water and once again I saw the long dark green object glide away.”
Mr. Reg Appleton, secretary of the Waitemata branch of the Auckland Acclimatisation Society, and Mr Harold Morton, who has lived near the lake for several years, asserted the “monster” was a large eel. Mr. Morton said he had often seen large eels in the lake—”and some 6ft. long and 12in. across, too.”