At 8 years old, I had my first experience of true terror, when I awoke to a man at the end of my bed. This man was definitely not my brother. He was a luminescent figure. No distinguishing features, just a glowing silhouette of light. I was frozen with fear, I couldn’t move. I couldn’t breathe. I could only sit, paralyzed with my eyes wide open from the confines of my bed. He never advanced, only stood and observed. This opened a whole new world for me. From poorly done Hollywood horror effects, to a tangible figure. My level of fear catapulted into full on paranoia. This man appeared to me on several occasions. Sometimes not for months, other times for nights on end. It seemed the more he visited, the closer he would get, until finally felt him upon me; suffocating and choking. I tried to talk to my parents, but of course, no one believed me.

They must have thought I was crazy…

That was 30 years ago, in 1984. We did not have the Internet. Pretty much unless you had access to scientific journals or others who knew about certain conditions, people were left to themselves to figure out what was happening to them. As an 8 year old child this catapulted me into curiosity, and utter terror.

While my experience didn’t quite describe something horrific like any of the creatures I’m about to mention, as I got older my experiences did seem to change. My non-descript figure became something much more sinister.

One particular night I recall laying in bed with my children’s father. My arms around his body, and facing his back, I was awoken to a humming. I opened my eyes and across the room, a masquerade mask I had hanging on the wall suddenly came nearly nose to nose with me. Terrified I laid there eyes wide staring directly into the eyes into the single most terrifying thing I have still to this date, have ever seen in my life. It was a man with a beard and gnarly twisted expression grinning at me. His eyes were so stunningly blue they were nearly white. His pupils were pinpoint, and he appeared predatory and ready to cause harm much like the way a wolf looks at his prey before going in for the kill.

He was so intense I felt as if I would have a heart attack.

I tried to shake my boyfriend and scream, but nothing happened. My muscles failed me. The more terrified I became, the less I was able to do. I squeezed my eyes shut, but I could feel him there. I have never in my life been more terrified than I was in that moment. I honestly feared for my life. 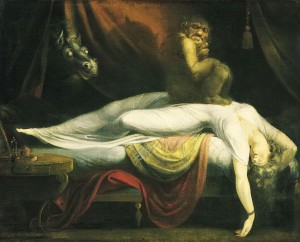 The Old Hag, Succubus, Incubus and other Folklore

Throughout history, creatures have appeared in stories and in mythology. This phenomenon comes from the superstitious belief that a witch, or in this case an old hag, sits on the chest of their victims paralyzing them. The old hag even makes an appearance in Shakespeare’s Romeo and Juliet.

•Incubus (nominal form constructed from the Latin verb, incubo, incubare, or “to lie upon”) is a demon in male form who, according to a number of mythological and legendary traditions, lies upon sleepers, especially women, in order to have sexual intercourse with them. Its female counterpart is the succubus. An incubus may pursue sexual relations with a woman in order to father a child, as in the legend of Merlin. Religious tradition holds that repeated intercourse with an incubus or succubus may result in the deterioration of health, or even death.

•Succubus is a female demon or supernatural entity in folklore (traced back to medieval legend) that appears in dreams and takes the form of a human woman in order to seduce men, usually through sexual activity. The male counterpart is the incubus. Religious traditions hold that repeated sexual activity with a succubus may result in the deterioration of health or even death. In modern fictional representations, a succubus may or may not appear in dreams and is often depicted as a highly attractive seductress or enchantress; whereas, in the past, succubi were generally depicted as frightening and demonic.

•The “Old Hag” was a nightmare spirit in British and also Anglophone North American folklore. Folk belief in Newfoundland, South Carolina and Georgia describe the negative figure of the hag who leaves her physical body at night, and sits on the chest of her victim. The victim usually wakes with a feeling of terror, has difficulty breathing because of a perceived heavy invisible weight on his or her chest, and is unable to move i.e., experiences sleep paralysis. This nightmare experience is described as being “hag-ridden” in the Gullah lore

If we look back historically throughout nearly any culture, there seems to be a type of entity or “demon” that violates people while they sleep.

In Scandinavian folklore, sleep paralysis is caused by a Mare, a supernatural creature related to incubi and succubi.

In Fiji, the experience is interpreted as kana tevoro, being “eaten” by a demon.

African communities as “the Devil on your back.”

In Turkey sleep paralysis is called Karabasan, and is similar to other stories of demonic visitation during sleep.

In Thailand it is believed that sleep paralysis and discomfort is caused by a ghost of the Thai folklore known as Phi Am.

In Eastern Chinese folklore, it is thought that a mouse can steal human breath at night.

Sleep paralysis is a condition described as results from disrupted REM sleep, which is normally characterized by complete muscle atonia to prevent the sleeper from acting out his or her dreams.

Symptoms of sleep paralysis may include:

Muscle weakness and an inability to move.

People typically feel as if a presence in the room with them.

It feel as though something is pressing down on them. This is something that is  sometimes perceived as being sexual in nature.

Attributed to claims of being choked.

People claim to hear strange sounds during episodes including voices, buzzing, and beeping.

Dreams are still being enacted during this stage. With the ability to move, the experiencer may see strange presences.

*Terror or Feelings of Dread

Typically accompanies SP. This is a very frightening experience, and people ofter associate the experience with something evil or malevolent.

*OBE, Out of Body Experience

Many experiencers report feeling drained or exhausted the day after an episode.

Now having heard the symptoms of SP, its easy to see why the experiencer may attribute their experience to a paranormal occurrence. Even as someone who’s had these experiences quite literally her entire life, it’s hard to get used to something that renders its victim completely helpless.

The fact of the matter is, is that SP is completely normal and not all that rare. Many people will experience one episode of SP throughout their lifetime. There are two stages of SP- ISP and RISP.

ISP episodes are infrequent, and usually occur only once in an individuals lifetime. This is the most typical case.

The other, which is what I have, is RISP. With this condition episodes can last for hours, and have a much higher occurrence of perceived out of body experiences.

ISP is usually attributed to Incubus, Succubus and The Old Hag because the victim doesn’t typically understand whats happening to them and because of sheer numbers, are less likely to be candidates for having paranormal experiences (assuming that paranormal occurrences are rare). Much like myself, with RISP the individual can suffer back-to-back episodes of sleep paralysis in the same night, which is unlikely in individuals who suffer from ISP.

According to MedMD, who recognizes SP as a physical disorder not a psychological one, that, “Sleep researchers conclude that, in most cases, sleep paralysis is simply a sign that your body is not moving smoothly through the stages of sleep. Rarely is sleep paralysis linked to deep underlying psychiatric problems.”

“Sleep paralysis is a feeling of being conscious but unable to move. It occurs when a person passes between stages of wakefulness and sleep. During these transitions, you may be unable to move or speak for a few seconds up to a few minutes. Some people may also feel pressure or a sense of choking. Sleep paralysis may accompany other sleep disorders such as narcolepsy. Narcolepsy is an overpowering need to sleep caused by a problem with the brain’s ability to regulate sleep.” 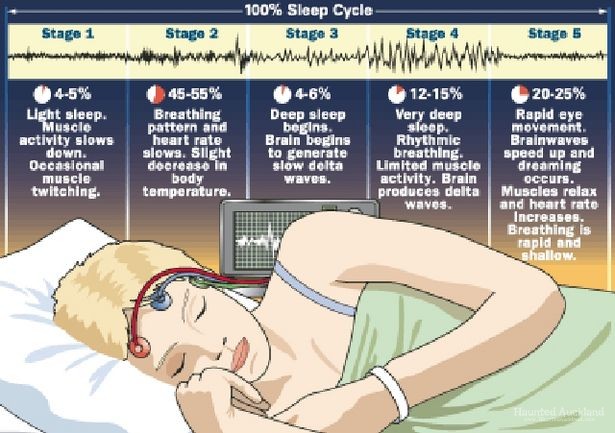 SP is believed to be an disruption in the REM (Rapid Eye Movement) stage of sleep.

Personal Tips on How to Prevent or Remain Calm During SP

I have found that remaining calm during an episode is what has helped me most. Instead of fighting to wake up completely, I am now able to remind myself that this is in fact a dream. It’s not to say I don’t get nervous but I do. I usually simply work on moving my hand or toes. Gradually I am able to move an arm or leg completely.

Preventing SP can be tricky, especially for people who work strange hours or have irregular sleeping schedules. My SP peaked when I was working NOC shifts at my local hospital. On my days off I found it hard to sleep all day as I did on work days, so I would sleep at night so I could see my family. Come work time, I would be back on my schedule. This caused my SP, lucid dreaming and OBE’s to be out of control. This eventually took a toll on my overall health and caused me to feel drug down all the time.

Try, if possible to get good sleep. Eat well, exercise.

Another trigger for me is supine sleeping. Sleeping on my back nearly always triggers an episode.

While its easy to see why people view SP as a paranormal experience, it is something that is recognized by the health industry just like sleep walking or narcolepsy. As a paranormal investigator we hear about cases of people describing symptoms and experiences that sound identical to SP. While we are sympathetic to peoples experiences, especially myself who’s experienced them from childhood, we can’t help to believe that most of these episodes can be explained easily through medical explanations rather than paranormal. We understand that this maybe hard for someone who is completely terrified by their experiences to understand, because they are so preoccupied by fear. But we hope through knowledge and education on the subject, we can help set some minds at ease, that there are somethings they can do to regain control over their situation. I can speak from experience that knowledge is exactly what’s helped me heal decades of lack of control. My turn to help you all.

If you have having similar experiences to those listed in this article, we are always open to talk to individuals about their stories.