The team was asked to visit this charming old inner Auckland city home which had been converted into two flats and is apparently displaying on-going potentially paranormal occurrences, experienced by those that live there.

The house was just a stones throw from the popular Three Lamps precinct and very close to the buzz of the ever-humming Ponsonby Road.

The residents of this house were a group of young people, who had only recently moved in, but some of the group reported seeing apparitions, hearing disembodied voices and other mysterious occurrences.

The house has been turned into two flats.  We were asked to investigate the  ground floor of the house where all the activity was focused on the rear bathroom, the two adjacent bedrooms, the hallway outside these rooms and the storage cupboard under the stairs and opposite the two bedrooms concerned.

The residents believe the street they live on may have once been a hub for gentlemen’s clubs and Brothels and that their particular home was one of them. We were unable to find any documentation to support this claim, however this can be confirmed for another street within the area. 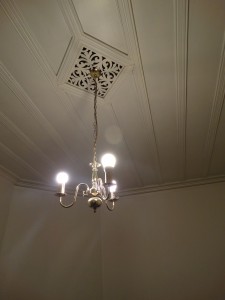 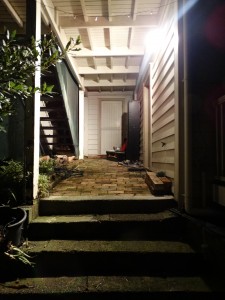 Cool and overcast.  It had been drizzling earlier in the evening but had stopped by the time we started the investigation.

The house looked so big from the outside but seemed so much smaller once we were inside.

Sam:  My first impression walking up to the front door of this residence was that compared to it’s modernised neighbours along the street – this house still had a look about it that suggested that it had stood the test of time. I imagined that many people had walked through the same front door through the years and that surely there was a story or two to be told about it.  On entering, it was typically a student flat. Home to allegedly seven flatmates, both male and female all ranging between believers and non-believers when it came to the topic of ghostly activity happening within its walls. 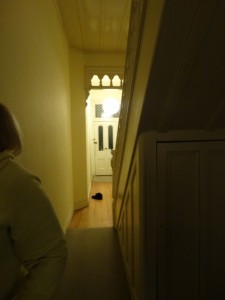 Mark: I found the varying levels of EMF around the house interesting. Whether It was a simple case of wiring behind the walls and under floorboards, I couldn’t say without breaking through the walls to find out. The way that small energy patches, all hanging at about head / eye height, were detected and were able to be tracked as they seemingly moved around the room, was interesting. Possibly not paranormal in nature, but still interesting as there didn’t appear to be any obvious reasons for it. .

After being given a tour of the home, highlighting all the ‘paranormal hotspots’ and a run down of all the previous activity, we set up equipment in these areas in the hopes of documenting evidence to give us some direction or investigative structure to start with, or perhaps some practical reasoning behind the stories. The team conducted a Class 2 investigation which included taking hundreds of photos, hours of video and audio recordings of the location’s temperature and energy level readings.  Tripod placed cameras as well as motion and EMF / temp sensors were positioned in specific areas of interest. We held several communication sessions using various recorders, trigger objects, and at times a ‘Spirit box’ in order to try to attempt to capture any unusual audio. We checked the alleged activity areas attempting to find reasons for the reported occurrences. 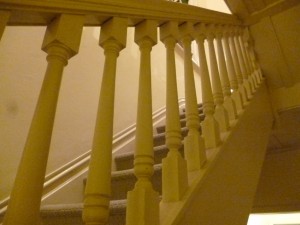 It was not the best of conditions for an investigation.  The area involved was a small part of a house and there were people in all other areas of the house who had no interest in our investigation so were speaking loudly and moving around.  There was music going somewhere, talking and laughter coming from upstairs and the tv was going in the downstairs flat. Despite this we took video of all areas, audio recordings of the whole investigation, took hundreds of photos and monitored EMF and temperature levels throughout the whole area.

Mark:  This case was a little tricky as we were at a disadvantage from the beginning due to a flatmate deciding to bring a number of friends home for a party upstairs while we were there .  Loud conversation and music, plus much walking around upstairs made any audio recording  or communication we attempted, rendered unusable. 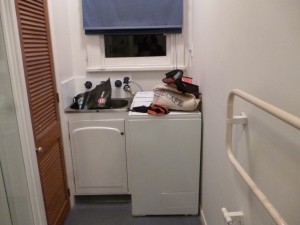 During our investigation the Haunted Auckland team did not witness any paranormal activity.  Unfortunately we were unable to conduct a thorough investigation due to others being present in the home but not part of the investigation. The conditions were not suitable for any controlled investigation as there were far too many contaminants which would have interfered with our data gathering. A couple of team members admitted to ‘feeling’ things during the session, however. While anecdotal experiences are interesting, they are unable to be recorded, verified or documented with any of the required solid data to be put forward as conclusive or valid evidence. We feel they are still worthy of mention and so are stated on this report in the name of general interest. Although we were hindered by the disruptions, we felt that the session was a good team training exercise, so was not a total loss.

Sam: In the short time I was there I did not experience anything that would suggest a haunting of any kind.; Other than what I can only describe as a “feeling” where the hair stood up on my head and I felt something brush past me in the bathroom (which was later confirmed as the spot the black figure was seen). I will put this down to coincidence and simply standing next to a window.

The people we spoke too were friendly and sincere. We have no reason to assume they are fabricating stories and feel that there might be some substance in the accounts, but until we can engage a more controlled investigation environment we cant really gather anything conclusive to say either way at this point.

For now the case remains open.