One of Auckland’s most famously haunted locations, the historic home of the Lush family for several generations. See what the team discovers in this two-part investigation. 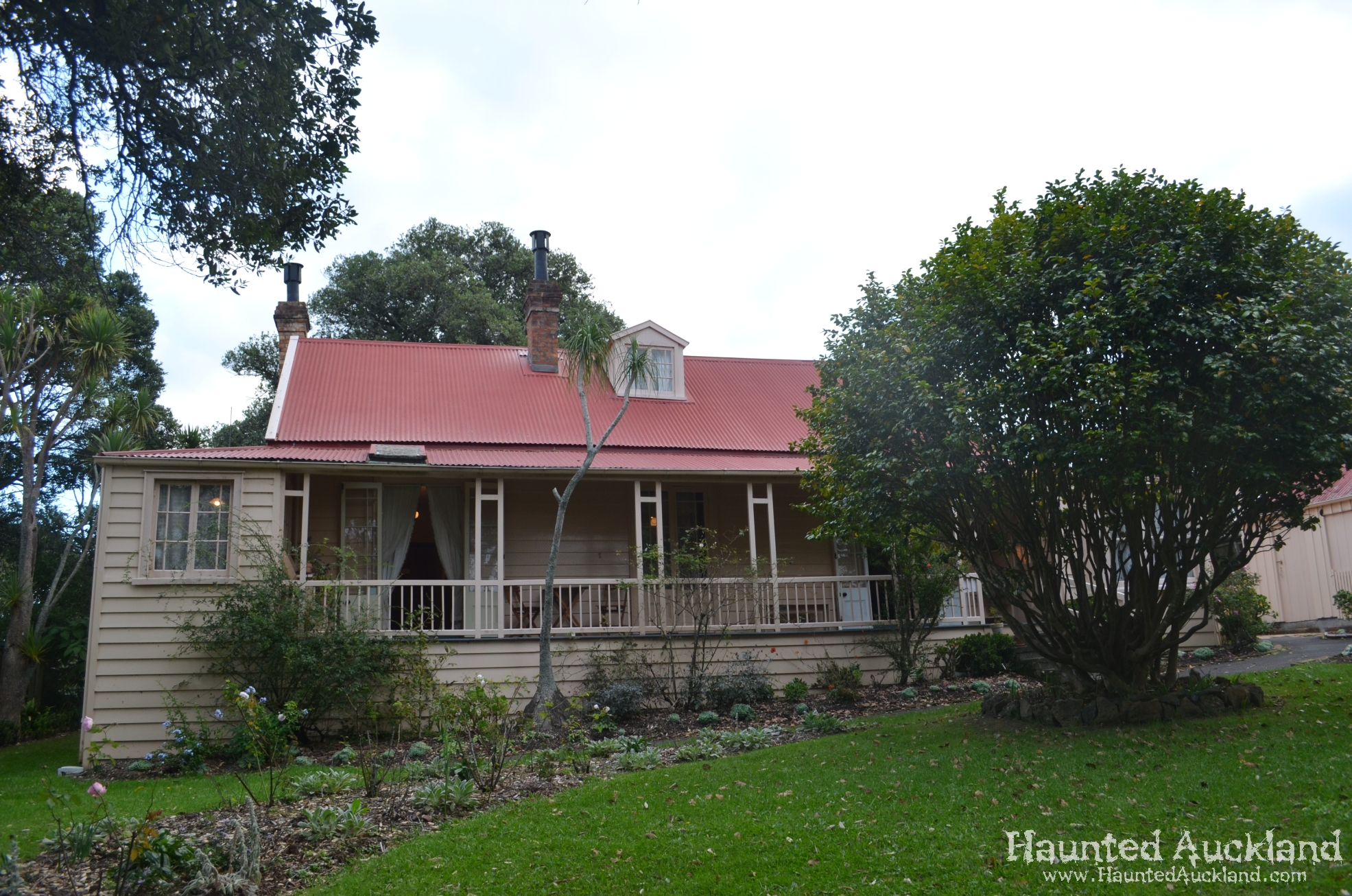 The kauri-constructed Ewelme Cottage has a link with the Anglican community in Auckland, the dwelling designed and built by the Reverend Vicesimus Lush (1817-1882) and his wife Blanche in 1863/64. Ewelme, after being extended 18 years after it was originally built, remained in family hands till 1968. Upon his death, Blanche had the cottage enlarged in the 1880s, living there until she died in 1912. Ewelme Cottage is of considerable importance for its well-preserved interiors and furnishings, and provides great value on colonial building materials and techniques.

Some architects have suggested that the design, with ground floor rooms laid out progressively along the axial length of the building, rather than having a conventional front and back, displays an influence from medieval British dwellings, and a religious consideration of the time which sought to blend medieval architecture into contemporary architecture.

The cottage, inhabited by descendants until 1967, was bought by the Auckland City Council and leased to the New Zealand Historic Places Trust. Surrounded by a charming cottage garden, Ewelme Cottage has remained virtually unaltered since the 1880s and is filled with family furniture and possessions, including a fine collection of over 800 books.

Through the years there have been stories told of hauntings and strange activities within the cottage, so Haunted Auckland decided to see if there is any truth to the rumours.

We decided to do the investigation over two sessions, this way covering our tracks and using the second session to following up on the first.

The group enter the cottage for an evening of surveillance, covering upstairs and downstairs with full photographic, audio recording and electromagnetic level readings in all parts of the house. For this session we use utilised cameras, digital recorders, static video cameras, a Trap Camera and Tri-Field Meter. EVP sessions were done upstairs, as well as in the study.

Rather high EMF levels were detected in a few places within the house. A cupboard space under the stairs was giving off very high EMF readings. On inspection, it was found to be due to a halogen light lighting up a glass fronted display case under the stairs. Another high EMF reading was detected under a rug in the entranceway to the Reverend’s study. There was evidence that the floorboards had been lifted in this area, so possibly some wiring had been installed there. The rug had been nailed to the floorboards so we had to scramble under the house to the point directly under the floorboards. It was discovered that under the house, (as well as a sea of cobwebs!), was electrical wiring attached to the timber structuring, which ran directly under that spot.

Upstairs, a couple of the more sensitive members felt rather uneasy and could feel ‘something’ in the child’s bedroom area. One of the sensitives, during an EVP session, picked up that the toy doll, sitting on a small chair in the child’s room, was lovingly named “Georgina”. They could not, however gather any more information other than that.

One photograph, taken outside the house standing on the veranda aimed at a glass window, seemed to show a rather eerie face looking back at the camera through the glass.

Also upon reviewing our photographs we noticed a couple of rather odd-shaped shadows which appeared on the wall in the study.

It was decided that due to the amount of EMF, photographic and sensitive based evidence picked up, that a follow-up session needed to be done to try to debunk our findings or further try to explain things by hopefully gaining more information.

We returned to Ewelme Cottage to try to debunk or confirm evidence gathered at the previous session. This time the team decided to specifically target certain areas of interest.

The shadow photos taken in the Reverend’s study were partly debunked. One photo we managed to explain as being the investigators own shadow, however the other photo with the tall pointy shadow could not be easily explained. The photographer would need to be making an unnatural pose (stretching one arm out behind themselves, palm pointed up) when taking the photo.

As the photographer was using no flash in a lowly lit room, both hands were needed to keep the digital camera steady to combat a blurred image due to low light, so we are we perplexed as to how the pointy shadow was created. We were left unsure about this one for now. Photos were taken showing the attempted effect recreation.

The photograph of the face in the study window was debunked as a combination of an elongated bubble in the window laminate and reflections in the window glass causing a face effect (Pareidolia).

One member claimed to have had a couple of “cobweb” feelings on this investigation. One while he came up the outside stairs onto the veranda, and another soon after as he walked through the doorways from the sitting-room into the hallway. The outdoor occurrence could have very well been actual cobwebs, however the inside occurrence was a little harder to explain. 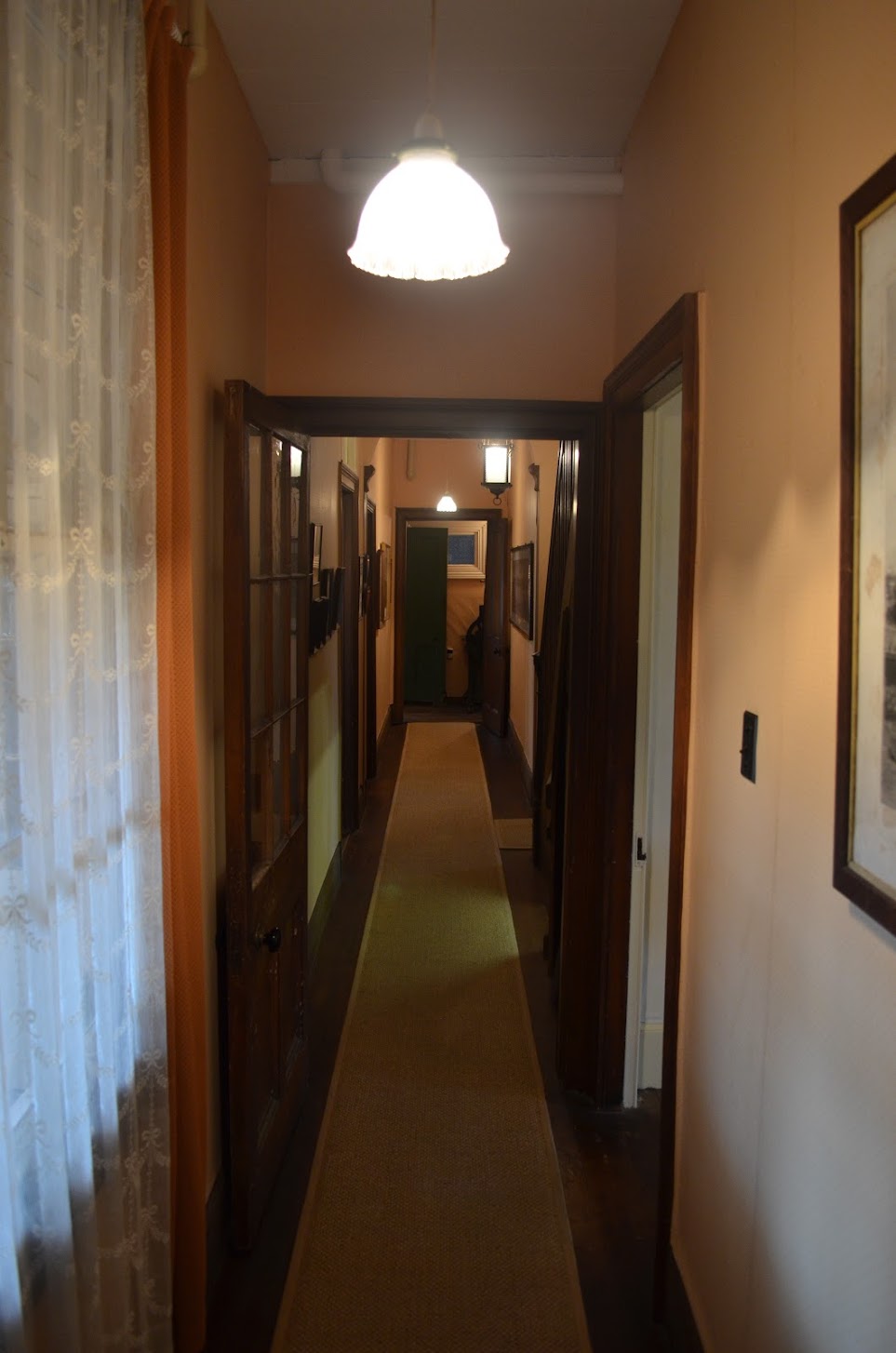 Three members held a very good, lengthy EVP session upstairs in the children’s bedroom, playing games with the toys in the room to try to engage with the little girl and hopefully start up some activity. The three told the girl about themselves, sang songs, showed her how the trigger objects worked, held a mock tea party, tried to get her to play with the ball and the dolls in an attempt to capture an EVP or movement.

There was also a bright yellow ball, brought along for the child, set up as a trigger object filmed with a static night vision video camera in this room. No movement was detected on reviewing the camera footage.

Two members recall doing an EVP session. One of the members had brought along a balancing bird toy as a trigger object. It balanced nearby to where they were sitting and started the session. During the EVP session they noticed that the bird was moving. Unfortunately a video camera wasn’t on it at the time. However, upon reviewing the recorded EVP session from that room, a “kkkkk” sound is heard and immediately after, they are heard then sounding excited about the bird moving.

Trigger objects were also set up in other rooms in the house to try to capture movement.

Upstairs in another side room, another brightly coloured ball and an aimed video camera was set up. As was a circle of magnetic ball bearings, illuminated by LED torch and a static cam. A chessboard table had coins laid out on it. No movement was captured by any of these trigger tests.

A pleasant, reasonably well-preserved old cottage (considering the condition of similar era buildings at other places we’ve investigated in the past like the Howick Historical Village). Gardens are well maintained, as were the items on display. Several generations of history crammed into one house made things feel a bit cluttered. We doubted it would’ve been like that when it was lived in. Upstairs felt a little cramped, with the sloped roof which was bowed in places and the corridor joining the rooms. No creepy feelings however, just atmospheric feelings due to the small space, creaky floorboards and warm air.

The general consensus among the ground was that the upstairs of the house felt more interesting or active than the rest of the house. Ewelme Cottage is certainly an interesting character place with an interesting atmosphere about it. It’s a house with a definite personality, be it quirky, cute or maybe just a bit odd.