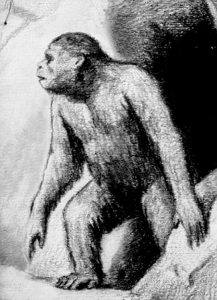 It has often been mentioned there are no bodies, that one conclusive tangible piece of evidence, ever found of hominid cryptids.
Why? Here in New Zealand, as would be the situation with our Moehau – New Zealand’s Bigfoot, once something dies in the bush it is very quickly adsorbed into the ecosystem and little to no trace of it remains. Many wayward trampers have ended there lives in this manner, never to be found.
If an animal were buried, the chances of discovery in regions of dense rainforest or bush would be slim. Most human bodies found in such areas are either chance finds, or found because they are in shallow graves which due to environmental factors or animal disturbance become exposed.
Another consideration is many hominids are described as having a social structure, family groups or territorial clans. If these sorts of social structures exist, it may further be that these beasts in addition have a concept of death and an afterlife. If this were so, burial may be a part of this notion. Assuming Hominids do have a loss concept, burials would certainly be deep enough so the corpse would not be disturbed or molested by animals.
I should think a secluded spot would additionally be chosen to give the departed one solitude and perhaps stop desecration by rival social groups.
These creatures live in the wilderness, it’s their home and they know it intimately.
They are extremely skilled at concealment, not only of themselves but their activities.
Anyone entering a burial area would be hard pressed to notice anything a miss.
In nature any void is quickly filled over by vegetation.
The chances of stumbling upon such a grave are remote even after just a few weeks.
We know from testimonials, casts and eye-witness accounts these hominids are not immune to injury, disease and no doubt misadventure.
There have been incidences reported where American Bigfoot have been struck by cars and literally left on the side of the road, only for the motorist to return and find no injured Bigfoot or body. Some casts have been found in the United States showing foot irregularities due to disease or injury. Some of these abnormalities show as having afflicted the sufferer for a long period of time. If this is true the hominid would have needed the help of others in order to survive.
It seems they care for their sick and injured. It’s therefore not unfair to assume there is further an afterlife concept among such creatures or even a tie of mutual caring and affection.
If this was not so why waste effort and resources caring for the sick and infirm.
This raises an interesting point, many indigenous societies suffered at the hands of their colonizers. The diseases they brought with them, to which the native community had no resistance, decimated many societies.
If the Hominids are close human relatives then cross contamination is a possibility.
If this were to happen it could have a disastrous effect on populations, especially isolated ones.
This may have been the case with the New Zealand Moehau.
Once European settlement commenced the Moehau sightings decreased.
Could European introduced diseases be the cause?
The Moehau was already; it would appear, to have been declining in population before the Europeans arrived. This may have been due to habitat destruction due to the massive burn offs the Maori used to clear land for cultivation. The introduction of European disease may have tipped the scales leading to their potential extinction. If this was the case extermination could have happened in a very short space of time.
It’s interesting to contemplate that the frequency of Moehau reports decreased as settlers penetrated the more remote areas of New Zealand, especially in the southern districts such as Otago and Canterbury once gold was discovered and mining commenced.
If this did not have some impact on the Moehau, if anything one would have expected sightings to have increased not declined.
This along with the more sophisticated advanced weaponry the Colonizers brought with them, the risk of catching a fatal infection may have been responsible for the change in behavior of the Moehau and other New Zealand Hominids. They moved from being aggressive and dominating to being shy retiring creatures that avoided man as much as possible. With the appearance of the Europeans something changed in their attitude.
Who knows, perhaps the answer lies buried in the bush and may never be found, or if disease has wiped this species out without our first getting to know it, somewhere out in the bush the answer to one of New Zealand’s most enigmatic mysteries lies undiscovered.