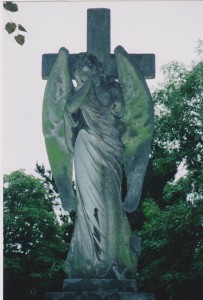 Brompton Cemetery is located near Earl’s Court in West London, England, in the Royal Borough of Kensington and Chelsea.

It is managed by The Royal Parks, and is one of the Magnificent Seven cemeteries. Established by Act of Parliament, it opened in 1840 and was originally known as the West of London and Westminster Cemetery.
Consecrated by the Bishop of London in June 1840, it is one of Britain’s oldest and most distinguished garden cemeteries. Some 35,000 monuments, from simple headstones to substantial mausolea, mark the resting place of more than 205,000 burials. The site includes large plots for family mausolea, and common graves where coffins are piled deep into the earth, as well as a small columbarium. Brompton was closed to burials between 1952 and 1996, but is once again a working cemetery, with plots for interments and a ‘Garden of Remembrance’ for the deposit of cremated remains.
The cemetery was one of seven large, modern cemeteries founded by private companies in the mid-19th century (sometimes called the ‘Magnificent Seven’) forming a ring around the edge of London. The inner city burial grounds, mostly churchyards, had long been unable to cope with the number of burials and were seen as a hazard to health and an undignified way to treat the dead.

Brompton Cemetery was designed by Benjamin Baud and has at its centre a modest domed chapel (in the style of the basilica of St. Peter’s in Rome) at it southern end, reached by long colonnades, and flanked by catacombs. The chapel is dated 1839. The site, previously market gardens, was bought from Lord Kensington and is 39 acres (160,000 m2) in area. The cemetery was designed to give the feel of a large open air cathedral. It is rectangular in shape with the north end pointing to the northwest and the south end to the southeast. It has a central “nave” which runs from Old Brompton Road towards the central colonnade and chapel.
Below the colonnades are catacombs which were originally conceived as a cheaper alternative burial to having a plot in the grounds of the cemetery. Unfortunately, the catacombs were not a success and only about 500 of the many thousands of places in them were sold. There is also an entrance on the south side from the Fulham Road. The Metropolitan Interments Act 1850 gave the government powers to purchase commercial cemeteries. The shareholders of the cemetery were relieved to be able to sell their shares as the cost of building the cemetery had overrun and they had seen little return on their investment.
Buried in the cemetery are 289 Commonwealth service personnel of World War I and 79 of World War II, whose graves are registered and maintained by the Commonwealth War Graves Commission. The majority of war graves are contained in a railed section to the west (also containing 19th century servicemen graves)