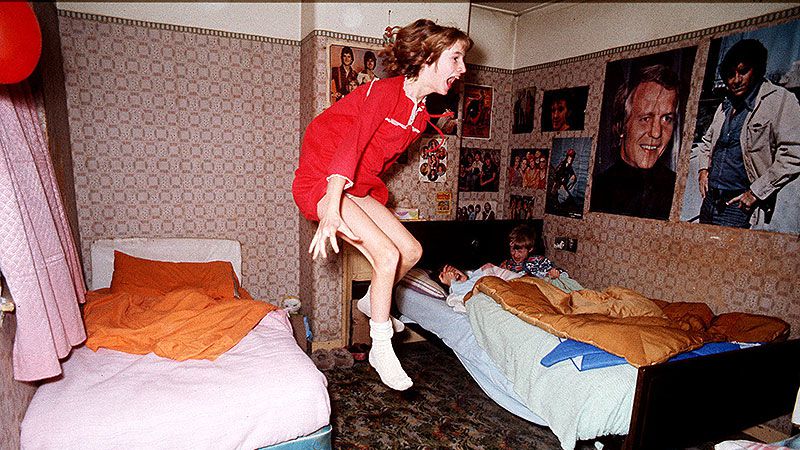 Could we be creating our own monsters?

In my previous post Part 1 of “Back to the drawing board” I proposed a theory that paranormal phenomena could possibly be created either intentionally or unintentionally, consciously or subconsciously This is a theory I believe may not be that farfetched. I also feel it is important for me to mention, that when I refer to paranormal phenomena, I am not just referring to that of spirits/ ghosts and entities, my scope is a lot broader, I am including phenomena such as psychokinesis, PSI, missing time, Astral projections and many more.
But for the sake of this post, I am solely referring to the manifestation of spirits, ghosts etc, and for a good reason.
In Part one, my explanations were very scientific-based. Whereas in this post I will be conveying my theory in much more layman’s terms by making use of a particular infamous haunting as an example.
The Enfield house haunting captured the horror and fascination of many. Psychics, priests, journalists, paranormal investigators, Parapsychologists, and even the likes of Ed and Lorraine Warren visited the house that had an ominous reputation. It’s no secret that even law enforcement was called to the property, swearing that what they had witnessed left them breathless, and in shock-the Enfield poltergeist. Many stated that they had indeed seen furniture move by itself. The house was alive, and it was torturing its occupants, single mom Peggy Hodgson and her two daughters Margaret and Janet. It was however the younger daughter, Janet that seemed to be the main target of the activity.
During the multiple investigations that were conducted at the house over time, it is true that Janet at one point was caught trying to fake some of the paranormal activity. A camera caught her bending spoons in the hopes that this would suffice as potential evidence, the reality was Janet desperately needed her claims to be believed. And when activity would die down during some of these investigations it made her anxious that the help they were receiving would come to an end. Apart from that one instance, many did witness poltergeist activity, and this was documented in their affidavits.
I am not confirming or denying the possibility that the Enfield house was haunted by a poltergeist, I do however believe the poltergeist activity may have been created and manifested through Janet herself. If we were to look deeper into the living circumstances and the mindset of the eleven-year-old at the time, you may see where I am coming from. Janet was reaching adolescence soon, in general, a very confusing and emotional period in a young person’s life, and it’s the adolescence stage that a proposed hypothesis comes into play.

Research done by Brovetto and Maxia from the higher institute of physical education in Spain stated that “Children can generate poltergeist activity by channeling energy into the quantum mechanical vacuum”. How? Here below is an excerpt from one of their journals surrounding this researched topic.
“The changes in the brain that occur at puberty involve fluctuations in electron activity that, in rare cases, can create disturbances up to a few meters around the outside of the brain.
These disturbances would be similar in character to the quantum mechanical fluctuations that physicists believe occur in the vacuum, in which “virtual” particle and antiparticle pairs pop up for a fleeting moment before they annihilate each other and disappear again”.
Brovetto and Maxia believed that the extra fluctuations triggered by the pubescent brain would substantially enhance the presence of the virtual particles surrounding the person. This could slowly increase the pressure of the air around them, moving objects and even sending them hurtling across the room.
Janet’s family lived on benefits and struggled financially. It didn’t help their mother was a divorcee and getting no assistance from their absent father. Her mother was also known to have suffered from bouts of depression starting in her early twenties. And as her mother, I do believe Janet suffered from mental issues as well. She was known to withdraw easily and did not have many friends, and I believe under the exact right circumstances, Janet was just a ticking time bomb waiting to release the intense amount of suppressed physical and mental energy. After all, the haunting only lasted for a period of 18 months. What changed for it to have stopped? Circumstances would be my best bet. And once her circumstances changed dramatically, so would her mindset. She may have unknowingly slain her own demon.

I am not saying every child suffering from mental anguish and going through adolescence can produce enough electron activity that may result in producing a paranormal phenomenon such as a poltergeist. Rather than the adolescent would have had a predisposition ability if that makes sense. An additional sixth sense. We see similar results in case studies where it’s been reported that those who have suffered a severe traumatic near-death experience, and or were revived after a near-death experience reported having gained the ability to suddenly see “things” and hear ‘things” they were not able to see or hear before. It’s as if they had attained some sort of ability when revived from the “other side”. I like to think of it as the body and mind’s way of rebooting with a twist.
This also does not mean that the phenomena itself are not legitimate, but Moreso the way it was created- came about. We could be creating our own monsters, and not realize it. But imagine the change, the outcomes, and the evidence that could be obtained, accomplished if we were to recognize the part the human brain and its physique plays when it comes to paranormal phenomena. In my opinion a subject worthwhile of further research and an experimental approach.