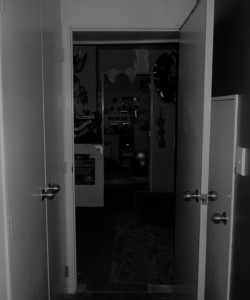 The Haunted Auckland team travelled to a small settlement just out of Whangarei to investigate a family’s reports of activity within their home.

The area is very old with the road outside the house once having been the main road between Whangarei and Auckland.  The settlement once boasted a courthouse and shops and in the 1800’s was a market garden area.  It was once a bustling settlement but is now an extremely quiet small group of homes situated a few kilometres from State Highway 1.  A railway line runs along the back boundary of the section.

The house was designed and built by the family while living in the house next door about 15 years ago.  It was modern and not open planned.  The family had made alterations over the years to allow the girls separate rooms at each end of the lower floor. (When the home was originally built the girls shared one large bedroom.) It was during these renovations the activity was first noted.

There were many activities reported.  These included:

The Haunted Auckland team travelled to the settlement and met  with the lady of the house and one of her teenaged daughters.  They explained what had been happening and walked the team through their home explaining where activity had occurred.  The team conducted a Class 2 investigation and took hundreds of photos, hours of video (including infra-red) and audio recordings.  They held communication sessions in key areas of the home.  These sessions were also videoed and recorded.  A spirit box was also used during part of the communication sessions. EMF levels and temperatures were monitored throughout the investigation.

EMF Meter: There were no fluctuations around the home and the EMF readings were between 0-1 Milligaus throughout the investigation.

13 degrees Celsius. These temperatures remained relatively constant throughout the investigation with no major fluctuations recorded despite one of the teenaged girls reporting that she felt extremely cold during one of the communication sessions.

Reported Paranormal Activity during the investigation:

On the night one daughter and the father choose not to be there but one daughter was. She said her dream catcher was spinning, when we immediately went in to look it had stopped, it was not caused by her walking in as we all just been in the room and it had been still. We asked her to go back in with a camera, she did and came out saying she caught it on camera but it is not moving on the footage so the movement that she is seeing could be slightly moving but we expected it to be spinning at speed so I guess it might have been moving just with the drafts in the room.

We were in one of the daughters rooms (the one who claims to of seen the gremlin) standing in the middle of the room. One team member claimed that it felt like they had been touched at the back of their head.

While in one of the girls rooms another member sat on the bed and immediately felt movement on or in the bed.  The whole team were in the room but none were touching the bed at the time.

No photos of note were taken that night.  The family had photos they had taken and two of particular note had been printed off for the Haunted Auckland team to view but the original photos were not available.  We were told of other photos, which showed anomalies, but once again they were not available on the night.  The family were going to send the originals of all the photos of interest but unfortunately most were not forwarded.  Of the photos that were sent to us non were of significant interest to the group.

We were shown two photo’s which were seemingly taken seconds apart with and the second photo showed an apparent apparition on a couch. Looking at it now, it appears that the ‘apparition’could of been someone physically standing there as there is a dent in the couch which shows pressure or weight was being applied.

Unfortunately as the original photos seem to have been lost Haunted Auckland have been unable to study the photos in depth to verify their authenticity.

Although we did attempt communication sessions and recorded them on audio and video the Haunted Auckland team were unable to obtain any clear EVPs.  There were several possible communications on the spirit box but these were not conclusive enough for inclusion in our report.

The night Haunted Auckland visited we did not see or hear any activity that we could not explain.  Upon reviewing all photos, video and audio recordings there is nothing to indicate any haunting or paranormal activity.  This does not mean that the home is not haunted but due to the lack of activity during our investigation I am unable to confirm it.