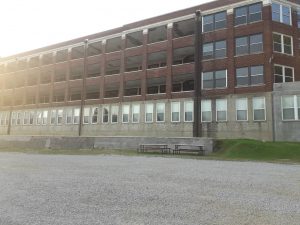 Early in the 1900’s following an outbreak of ‘White Plague’ (otherwise known as tuberculosis) the Waverley Hills Sanatorium was purpose built for patients in hopes of containing the disease. There was no cure for the disease and whole families and sometimes, whole towns died from it. The land chosen for the sanatorium close to Louisville had formerly been known as Waverley Hills, so the new facility was named for the land it was built upon. The original hospital was opened in 1910 and could accommodate 40 to 50 patients who were in the early stages of the disease. Later, the wooden building was expanded to allow room to accommodate not only advanced cases of pulmonary tuberculosis but also a children’s wing and a wing for the children of patients, making the total capacity of the hospital around 130. In those days there was no cure for tuberculosis, so it was considered that the best treatment for those in the early stages was fresh air, nutritious food and lots of rest.   Many patients did survive but many hundreds died while at the hospital.

Some of the experiments the staff at the hospital conducted while looking for treatments for the disease would seem barbaric by todays standards. Fresh air was thought to be a possible cure and photos from this era show patients sitting in the open air porches and sunrooms under blankets covered in snow. Other treatments were worse. They used electro shock therapy for those with TB of the brain and some patients with TB of the lungs had balloons implanted into their lungs and the balloons were then inflated. Worse still was the surgery to remove muscles and ribs in an attempt to make more room for the lungs to expand further. Many people died from these attempts to treat the disease.

Patients who did not survive left the building in the Body Chute which was an enclosed tunnel which lead from the sanatorium to the railway tracks at the bottom of the hill. At the peak of the epidemic one patient each hour was dying and as doctors didn’t want patients to realize just how many succombed to the disease, bodies of the deceased patients were lowered down the chute to waiting trains.

The need for such a hospital was greatly diminished upon the discovery of the antibiotic Streptomycin and in 1961 the hospital was closed but reopened a year later as Woodhaven Geriatrics Sanitorium. There are many stories about patient mistreatment while the building a geriatric facility, including the use of electric shock therapy for a variety of ailments. The mistreatment was not helped by budget cuts in the 1960’s and 70’s and finally in 1982 the hospital was closed down.   By 2001 the building had been almost destroyed by time and neglect and became a magnet to vagrants, vandals and people wanting ghosthunting thrills. The current owner purchased Waverley Hills about 16 years ago and there have been recent plans to convert the building into a hotel and conference center. During my visit there I saw evidence of this with some of the downstairs room having had renovations started.

You can imagine my absolute delight when planning this trip to the US I realized that we were going to be relatively close to Louisville and the infamous Waverley Hills. I have heard so many stories about this building and long before it was cool to be a paranormal investigator would dream of investigating there I would avidly search out information and stories on the building.   Over the years I have heard so many tales recounted about the Waverley Hills Sanitorium, so it was a must see, even if we do have to drive two days out of the way attraction. (It did also help that it is in Kentucky and hubby was keen to do a bourbon trial).

The building is reputedly extremely haunted with numerous reports of paranormal activity there with many reported sightings of various apparitions (doctors, nurses, men, woman, children, shadows even cats apparently) and moving shadows. Lights have apparently been seen through outside windows while the building was deserted and there was no electricity connected.   Many visitors also report doors slamming, doors opening and closing by themselves and lots of strange, unexplained noises. Of all the stories I’ve heard I think ‘The Creeper’ is the most unusual and the one I was looking forward to maybe seeing. This small black shadow is supposed to crawl around the ceiling and sometimes down the walls. I was surprised to hear that the staff at the Sanitorium believe that the Creeper is half woman, half shadow and that the creeper and the ‘Large Black Mass’ are the same creature.

We did two tours of this amazing building. The first was a historical tour so I could get a good idea of what was what and where everything was before we did the 6 hour overnight Investigation. The historical tour was really interesting and as it was daylight we were able to clearly see all the areas we would be visiting that night. A huge problem with both of these tours was that we were not allowed any recording devices or video cameras during the day time tour and although we were allowed them for the night time Investigation we were not allowed to use strong torches (only a small one in the stairwells) and were discouraged from using flash when taking photos. (You will see by some of my photos that I did use both but only when I was alone in an area or the people in the area close by were also using torches. I also did manage to take a couple of videos using my phone). I was however able to do many communication sessions in areas where I was the only person there and I took many hours of infrared footage which will be closely reviews upon my return home. At about 4.30 about half the people on the tour decided they wanted to leave so for about the last hour hubby and I were the only people on the entire ground floor which included the body tunnel so I’m really looking forward to reviewing that.

During our time there the only (maybe) odd thing that happened to me was when I walked into a room on the fourth floor and smelt dog. Later we were told that a homeless man and his dog had lived in that room and that he and his dog had been murdered some years before by a group of kids who had broken into the building. Also strange was when hubby and I were standing in the doorway to the stairwell and hubby reported seeing a small dark mass move down a couple of stairs onto the landing, then within two minutes we came across a couple who also reported having seen a small dark mass moving across the floor in one of the large rooms nearby. Many people got ‘ghost pictures’ that night but when I looked at them they looked like pareidolia, dust or nothing at all to me!