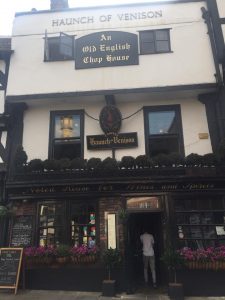 On my way to visit Stonehenge in July 2018, I stopped off in the ancient City of Salisbury and took the opportunity to visit one of the oldest and most haunted pubs in the city.

The Haunch of Venison is a very unique pub; the atmosphere is thick and heavy when you walk in.  You can feel the years of history, and as you sip your beautiful English pint of real ale, you know you are part of 700 years of people doing exactly the same thing; you become part of that history too. The pub has featured in CAMRA’s (Campaign for real ale), good beer guides over many years. The beer is certainly wonderful there.

The first record of the Haunch of Venison is circa 1320.

At this time, the building wasn’t a pub, but was used to house craftsman that were working on the Cathedral spire.

The building may have then been used as a brothel for a time after this.

To the right as you enter the pub is the ladies snugalso know at the “Horsebox”. The “Horsebox” is said to have been used by Winston Churchill and Dwight Eisenhower during the planning of D-Day landings back in 1944. The panelled bar counter has a pewter top, one of only six in the entire country. Also above the bar is a rare wooden carved elevated arch with seven origin gravity-fed spirit taps fitted in 1909, for which only five remain in the country.  The marble tiles on the pub floor originate from the Cathedrals’ Chorister area and were fitted when the heating system was changed in the Choristers. There are no dispensers on the counter and hand pumps are affixed to the bar back-fitting, which also has drawers, apparently also very rare. There are reputedly secret doors, with a hidden bar accessible only through and underground staircase, and a trap door in the floor which leads into a tunnel which in turn leads to St Thomas Becket church located behind the pub.

The Haunch of Venison is probably most famous for its mummified hand. At the top of the first set of stairs under the fireplace is a former bread oven. This bread oven houses a smoke preserved mummified hand. The original hand was found in the fireplace when the building was being remodeled. At that time it was placed in the oven on display. The hand has been stolen a few times over the years the last time being in 2010, however it has always been returned.  I believe the hand which sits securely behind bars in the oven may now be a replica due to the thefts.

The story behind the hand is that that it is from an 18th century demented whist player who had it chopped off for cheating. He is now thought to roam the pub looking for his hand. His presence is often accompanied by the smell of freshly turned earth. He is believed to be responsible, open and closing doors, hiding objects, moving glasses across tables, turning on and off taps and electrical items.  Numerous people have reported seeing the man and the manageress of the pub, who lived on the top floor, is reported to have awoken in the night to see a ghostly man standing by her bed with his arms crossed.

Another ghost seen wandering the pub is that of a black haired woman, wearing a long white Victorian dress. She is believed to be looking for her son whom she sent on an errand to the pub to buy some bottles of drink, he then vanished never to be seen again.  The smell of roses often accompanies her presence.

Behind the pub is the church of St Thomas Becket, a grade I listed Church which was originally built in 1220, then rebuilt in 1450. It’s well known for its “Doom” mural which was completed in 1475. In the front of church sites the graveyard which is known to be haunted by a grey lady who wanders amongst the graves. She has also reputedly been seen walking up the alleyway at the side of the pub.

The Church tower can be seen from the second floor of the pub. Whilst having dinner, I enjoyed sitting and watching the two wooden figures (“jacks”) which sit under the clock face on the bell tower. At each quarter hour, the figures rotate and simulate hitting the balls with the halberd that they each hold. It was really charming. The bells are actually hit by a hammer that sits behind them. The Jacks represent men in 16th century armour and the original installation dates from 1581. The Jacks were replaced in the late 17th to early 18th century.