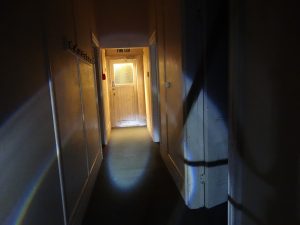 Last nights return to the old Auckland school was interesting to say the least.

We started at 8pm (but began our live Facebook feed at 9pm) and carried on through to just before 3am. From there on, I spent the rest of the early morning doing it solo. I got to sleep around 4.30am and awoke and packed up to leave at about 7.30am.

Was a great night and alot different to last weekend’s visit.

Wanted to document an experience I had while it is still fresh in my mind.

Before we had even started the live feed at 9pm, I had my first experience. I was squatting down, plugging in power to a couple of video cameras, when to my right, something caught my eye. Jerking my head in that direction I caught for a brief moment, a grey mass moving quckly and silently through an office doorway. This was about 5 meters from me. Seen with both eyes for about a second. (one Mississippi). The image wouldve been about 2 feet from the door when I saw it. I didn’t note any features, face, arms or legs. In fact it didn’t walk, it sort of ‘glided’ in. A gliding grey mass.

In the next four seconds I had leapt up, was at the office door and had the light switched on. No one was there. I repeated ‘Hello?, Hello?”, expecting to see someone. Nothing.

A split second thought reaction was that it was either Lisa arriving and just not seeing me there, or a staff member or security guard coming in to retrieve or check something.

I then leapt up the stairs to tell the others. Havent had that kind of rush in ages!

The last possible apparition I thought I saw was back at Kingseat, in one of the celled levels. Of the possible figures I have so far witnessed, this was the first grey one. All others looked like dark shadows.

In this same area (just outside the office, by the stairwell) both Lisa and Barbara reported feeling dizzy and nauseous. Whether this is connected in any way, we dont know. Noted: EMF levels were flat in that area.

Other activity noted by the team during the night were possible footstep sounds coming from the floor above and at the top of the stairs. Voices that appeared to be coming from another part of the building when we were all together in one spot, the overwhelming sense of being watched or followed (though these were purely feelings only and possibly due to the dark creepy surroundings), odd metallic clunking/ tapping sounds we could not find any source for, quite a bit of battery drainage from cameras and gadgets. New batteries inserted at the start of session. A ball (trigger object) moving on the stairs which was away from drafts and fixed in place with tape so it wouldnt just roll at the slightest breeze or vibration. Stairs were checked at the beginning to ensure there was a level surface.

Many of the sounds we were hearing were also comfirmed by numerous people tuning in to our live Facebook feed who commented on hearing them. The movement of the ball mentioned above, was brought to our attention by 5 or 6 viewers that had noted its change in position. We have isolated that piece of footasge and will have a clip for our followers to form opinions on soon.

As well as our standard investigation check-list, we sat in for a few communication / interaction attempts; Marlene conducted a personal solo sensory experiment similar to a Ganzfeld session, with some interesting results.

This isnt our full report, just a few notes I wanted to jot down .