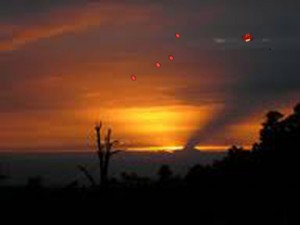 In the latest UFO news, a father and daughter from Waituhi, New Zealand shot some video of strange lights in the night sky on Friday and are now appealing to the public for help in identifying the unidentified flying objects.

Kharma Jones and her father Matthew spied the noiseless, hovering aircraft while on a walk in the town, and, luckily, had a digital camera with them. The video shown below is the result.
While the video quality and camera work are shaky at best, the pair managed to capture a minute of footage which is hard to explain as any kind of conventional aircraft.
What appear to be three distinct flying objects, with a triangular light pattern, are seen hovering in the pitch-black night-time sky.
Lights on the craft can be clearly seen”winking out” which is not a normal occurrence for pilots navigating through the air so close together. And why are these objects hovering, noiselessly above? There are no known aircraft which can perform these kinds of aerial manuevers. So what are they?
That’s what the Jones’ would like to know and they’re appealing to the public for help. “They were visible for about five minutes and then two of the orange lights went off on their own and they all disappeared like someone had turned a light switch off,” said Mr Jones. “I can’t believe no one else saw it. I don’t know what to think.”
Comments on the YouTube channel where the video is posted have no real explanation for this latest UFO news story. Commenters agree they’ve seen the lights as well, for at least a year, and no one is able to explain it.
What do you think? Is this evidence of a UFO? Or are these conventional aircraft? Do you have an explanation for the Waituhi UFO?