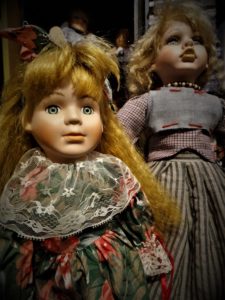 A couple of recent additions to the haunted item research room (or the Hoarding / junk room, as the wife calls it!)
Went around to collect these two mischievous girls, due to their inability to behave themselves, causing much grief and unease in this suburban One Tree Hill household.

The story goes that the two dolls were given to one of the family by an old woman living in Mt Albert. Soon after being brought into the home; mysterious occurrences began. Sounds of movement at night and unknown ”people” were seen around the house by various family members. The son reports hearing a voice calling out to him. Thinking it was his mother, he replied, only to find it wasn’t her at all. Sounds of disturbance coming from the kitchen; such as plates being dropped and moved around, as well as knocking coming from the Laundry Room.

Shadows have been seen around the house by all family members; walking into rooms, sitting on chairs and standing in corners. A pet bird also seems agitated by the dolls presence and would ”go crazy”.
For now though, the dolls will remain locked in the room, under camera surveillance.

We have a 4 camera DVR set up monitoring the room. A separate motion activated camera and motion / vibration sensor lights will be placed nearby. Temperature and atmospheric data loggers will run 24 / 7, to detect and note any changes or fluctuations that might occur. ”Smiley” the trigger ball will be there standing guard, alongside a few basic trigger objects.
The research set up still isn’t as ”controlled” as I’d like it to be, but will do as a starting point with this case.

I’m not sure what it is with dolls and their continual apparent connection to the paranormal. Perhaps it’s the human aspect of them that contributes to this fear? Like they’re little people. Perhaps they’re just subconsciously a ”scapegoat” for things that might be going on in our own heads? Maybe the activity has a different source and it was just coincidence that it started when the dolls were brought into the home? I don’t know. So many questions.

I have just heard from the family that since taking the dolls yesterday, everyone had a much needed good night’s sleep.

Thank you Shannon for passing the dolls on to me and thanks Rachel for recommending Shannon make contact with me.