Transpiration is a naturally occurring phenomena that is similar to evaporation, and is part of the water cycle. It is a loss of water vapour from parts of plants, especially the leaves.

How does this differ from Evaporation or Evapotranspiration?

Transpiration is defined as: “The emission of water vapour from the leaves of plants “

Transpiration is distinguished by the fact that it is the movement of water vapour from a plants leaves into the atmosphere.

So what conditions are needed for transpiration?

As the relative humidity of the air surrounding the plant rises the transpiration rate falls. It is easier for water to evaporate into dryer air than into more saturated air.

When moisture is lacking, plants can begin to senesce (premature ageing, which can result in leaf loss) and transpire less water.

Plants transpire water at different rates. Some plants which grow in arid regions, such as cacti and succulents, conserve precious water by transpiring less water than other plants.

How is this relevant to the paranormal? 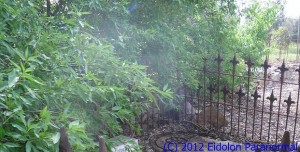 In this cropped down photo you can clearly see the mist surrounding the leaves of this plant. This is transpiration in action.

Often mists like this are mistaken for something spiritual manifesting in a cemetery when it is a natural phenomena that is present in nature.

You may see many day time photos containing similar mists shot in outdoor areas such as cemeteries, parks etc. The majority of them can probably be explained away as transpiration and not something paranormal but there is always that 1% of data that cannot be explained.

This effect is not to be confused with condensation.

Condensation is the change of water from its gaseous form (water vapour) into liquid water.

Transpiration is the evaporation of water from plants. It occurs chiefly at the leaves while their stomata are open for the passage of CO2 and O2 during photosynthesis.