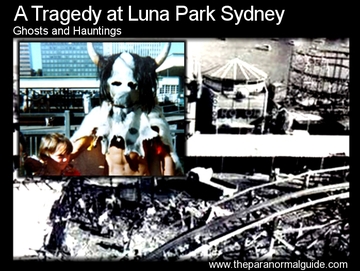 Luna Park Sydney opened October 4th, 1935. The park enjoyed roaring trade up until the 1950’s when numbers declined, mainly due to the increased popularity of television.
But the park continued on, and in 1979 tragedy struck when a fire engulfed the ghost train killing seven, including two young boys. Some say there is an occult undertone to this event. Others say some of the spirits of those killed still remain on site.

Luna  Park is a family friendly amusement park located on Sydney Harbour  Foreshore. The concept and style of the amusement park was modelled  after the original Coney Island Luna Park  in New York. Sydney’s is the  third ‘Luna Park’ to be built in Australia after Luna Park Melbourne  (1912) and Luna Park Glenelg (1930). Luna Park Sydney (opened as Luna Park Milsons Point)  opened with immediate success on the 4th October, 1935. Many of the  rides and attractions had been relocated from the Glenelg site which  went into liquidation a year earlier after trouble with the council and  local residents. The site had previously been occupied by the  construction yards and sheds used for the building of the Sydney Harbour  Bridge. Once the bridge had been completed the sheds were demolished  and applications for tenders were received to develop the site. It was  the minds responsible for Luna Park Glenelg that won the contract and  the park was constructed over a three month period. Luna Park  would only open for nine months of the year, closing for the winter  months until 1972 when it stayed open all year round. During the 1950’s  the park started to see a decline in attendance due to the increasing  availability of other forms of entertainment in the form of television.  In 1969 the park was sold and the new owners sought to develop the site  into a multi storey trade centre. The application for development was  overturned and the park stayed open for another decade until tragedy hit  and the park was closed.

On  June 9 1979 a fire broke out on the Ghost Train at about 10:15pm. The  ride was at capacity as the smoke billowed out from the doors and  through the roof. The fire completely consumed the ride. At  11:30pm, about one hour after the fire had started it was brought under  control and seven bodies were recovered: John Godson, his two children,  Damien (6) and Craig (4), and  College students Jonathon Billings,  Richard Carroll, Michael Johnson, and Seamus Rahilly. Their deaths were  caused by either damage suffered from direct burns or carbon monoxide  poisoning. The bodies were not recovered from the train cars  but rather the victims had left them in order to find a quicker exit.  The cause of the fire was never conclusively discovered but it was  stated that even if the victims had stayed in the cars they would not  have fared any better as the cars were seen to exit the ride on fire.

There  has been many theories about the cause of the fire from the mundane;  electric faults, cigarettes igniting props to the more sinister; arson  committed by Sydney underworld figure Abe Saffron or a ritual sacrifice  to the ancient Ammonite god ‘Moloch’. It is the last theory  that has gotten most of the spotlight in recent years. The ritual  sacrifice of children to the god would take place in  a giant oven  depicted as a giant bull. The children would be placed inside the ‘oven’  or in the figures arms to burn to death. The theory was  started after a picture was dug up, possibly the last ever taken of one  of the young boys killed in the fire, shown standing next to a figure  dressed in a strange horned bull like mask complete with horns. The  photo was taken at the ferry just before the boy visited the park.   To add more interest to the theory a boy by the name of Marshall Said  (16) stated that a car with two young boys was still let into the ride,  the last car to do so, even after he had signalled to the operator that  there was a fire. The last issue of the Sydney’s ‘The Sun’ Newspaper  featured a story on the front page titled “Occult Link to Luna  Park/Ghost Train fire” Luna Park closed after the tragedy but  reopened in the eighties. It underwent several more closures and  re-openings until 2004 when it reopened and remains so till this day.

Unlike  Melbourne’s Luna Park which had its famous ‘Joker Ghost’ the hauntings  at the park are relatively low key. They are generally of a more  personal nature with people experiencing strange whispers in their ear  in the vicinity of the ‘Big Top’ built on the location of the old Ghost  Train. There is not a lot more to say except by Jennifer  Poidevin who is the mother of the two boys who along with her husband,  that died in the fire: “We asked Damien and Craig what ride  they’d like to go on again, they chose the Ghost Train. Little did I  know… For some reason, suddenly I felt like an ice-cream. I asked the  others if they wanted one, but they said no. I asked them to wait for  me, but when I turned around they were gone. I don’t know why  they didn’t wait for me, as we’d been on every ride together that night.  It still haunts me to this day. Something spiritual took over. Divine  intervention? For some reason, I was not meant to die that night.”