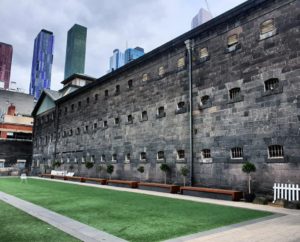 It’d been many, many years since I’d been to Melbourne. In-fact the last time I’d been I think Kylie and Jason were still mulling about on Ramsey street and I remember peeking over the fence at a friend’s house thinking that the set of Neighbours was on the other side. That was over 30 years ago if anyone’s counting.

However this time around it was only a short fleeting visit with the family, but as per usual I was more than keen to check out anything abandoned, historical, haunted or all of the above when I had the chance, to which we managed to squeeze in a tour of the Old Melbourne Gaol just before jumping on the plane to fly back home.
Before we begin “Gaol” and “Jail” are said the same way and pretty much mean the same thing, with “Gaol” being the more popular spelling between the 1700’s to the mid 1800’s with British and Australian jurisdictions and “Jail” being more of an American spelling which later became the more widely preferred spelling with the introduction of newspaper print.

The Old Melbourne Gaol (Now shared with the RMIT university) began construction in 1839, and since it’s operation as a prison between 1842 and 1929 it has housed some of Australia’s most notorious criminals such as the Outlaw Ned Kelly and Serial Killer Frederick Bailey Deeming, as well as many other men women and children…..yes children. It was mentioned by the tour guide that a child by the name of Michael Crimmins at the young age of 3 had been sent to the prison for 6 months after being “idol and disorderly” in the streets on his own.
It was believed that he would have been safer and would receive better care inside the prison walls. It is alleged that his mother was later arrested and joined the boy in the Gaol.
Prisoners were kept in a single cell with nothing more than a straw mattress, a small table, a bucket for a toilet and a Bible. They were allocated one hour of exercise a day with the other 23 hours spent in their cell. It was believed that such isolation would lead to purer thoughts and cleanse the soul through having nothing more than four walls to look at and the Bible to read. New inmates would begin their time in solitary confinement on the lower level of the Gaol. They would also be made to wear a calico mask to hide their identity and communication would be strictly forbidden. and with good behaviour would be able to move to the second or third floor where they would have access to more privileges such as blankets, slightly larger cells and more social contact with other inmates. Bathing in cold (and also shared) water and a change of clothes was allowed once a week and Chapel would be held every Sunday with some sermons lasting as long as 4 hours.

As well as greater privileges on the third level of the Gaol, you would however find the Gallows, of which those sentenced to execution by hanging would drop through the gallows trap door and hang before hitting the floor on the ground floor. It is said that around 135 executions were made during the Gaols operation. A death Mask, or a cast would be made of the inmate’s head as part of the phrenological (a study of feeling bumps on the skull to determine psychological attributes) of the hanged inmates. By law the inmate would then be buried in unmarked graves in the Gaols buried yard.

So, what about the Ghosts?

While I didn’t experience anything of the paranormal variety during my visit, Old Melbourne Gaol is the kind of setting that you’d walk out very disappointed if it didn’t have a tale or two of spooky happenings – and of course it does.
Elizabeth Scott, convicted of murder and executed in November of 1863. The first woman to be executed in Victoria. And it is said that her spirit never left. With many tales claiming that her disembodied voice can be heard throughout the Gaol.
Cell 17. What many have claimed to be the most active cell in the Gaol. With claims that people have been pushed or pulled, generally feeling uneasy within the cell or even scratched or assaulted by an unseen attacker.

Of course, these are a few of the many stories linked to previous inmates or rooms within the Gaol. There are also claims of shadowy figures and disembodied voices seen and heard right throughout the building. Personally, I think given the fact that the Gaol is within the heart of the city and is exposed to all sorts of light sources, the source of voices, exterior noises and causes of shadowing would still be quite hard to determine. However, there is a smidge of optimism in me, that given the old bluestone walls, apply that to the stonetape theory and what you have is one impressive looking natural recording device. So, I’ll leave that “what-if” right there to think about.

So, Is the Old Melbourne Gaol worth visiting? Most definitely, even if (for me) the visit was more about tales of crimes and punishment in a historical location rather than a visit experiencing paranormal activity, being in a place like The Old Melbourne Gaol still had me smiling like a kid in a candy store. There is a sense of wonder in a place like this for a person like me, and while there is only one cell block open to the public to explore thus far, new rooms are still being discovered behind bricked up walls, rooms thought to be more isolation rooms and punishment cells.
Will these ever open up to the public? I’m not sure, but if they do, I’d love to go back and explore them.
-Sam