On a recent trip to Sydney to visit some of the many historical oddities, Haunted Auckland visited the notorious Suez Canal, a lane created in the 1840s. It was one of the most unsavoury places in Sydney in its time and was the frequent hangout of ex-convicts, street gangs, prostitutes and some of the underground’s worst low-lifes.

Harrington Lane, a lane created in the 1840s didn’t acquire the name Suez Canal until around the turn of the century. “Suez Canal” (supposedly a pun on “sewers”), was one of the most unsavoury places in Sydney in its time. The Suez Canal runs between George and Harrington streets. So narrow that two people can’t walk abreast, this alley acquired its name before drains were installed, when rainwater would pour down its funnel-like passageway and gush across George Street.

During the 19th century, The Rocks was depicted as a place where ‘slang and vulgarity were mixed in lavish quantities, where harlots and riffraff, ex-convicts and the scum of all the oceans collected’. It was haunted by prostitutes and larrikins, there were brothels and sly grog shops. At the end of a laneway in the courtyard near the British Seaman’s Hotel locals gathered to place their bets on blood sports like cock-fighting. It was a brave or foolish person who wandered down the alleyways of The Rocks at night.

A mix of ex-convicts, riffraff and whores, they battled rival gangs for turf, frequented the local brothels and opium dens, and engaged in fringe crime. Drunken sailors often fell prey to their schemes, lured back by female members to the lane, where they were assaulted and robbed. Women were warned never to go near Suez Canal, there were stories of young women who were kidnapped and forced to work in the brothels where the women were not much more than sex slaves.

The Suez Canal was the stomping ground of the notorious Rocks Push, a street gang that dominated The Rocks in the 1870s. They would hide razor blades in their shoes and slide them against the Achilles tendons of unsuspecting sailors hooking up with prostitutes on street corners. They would then beat them with socks filled with sand till the sailor was unconscious, run off with his valuables, empty the sand from their socks and put them back on to hide any evidence. They were so good the police couldn’t ever catch them or book them for jail time.

In 1891 it was reported that there was an opium den in Suez Canal, and several others spread through The Rocks, where the activities that were said to go on in them were shocking. When this was investigated, there was no truth to it, but the reputation was established and hard to shift. The combination of gambling, prostitution, drugs and violence that occurred here in the 19th century all helped to form the popular reputation that The Rocks was a slum and deserved to be demolished. Demolitions in the early 1900s largely put an end to gang’s back alley antics, but the Suez Canal still remains. 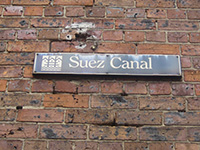