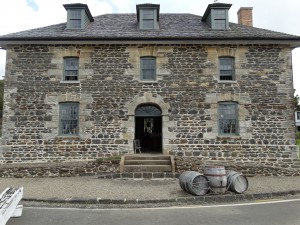 It was designed by Wesleyan missionary John Hobbs, and built by Australian convict William Parrott.

The Stone Store was constructed to hold mission supplies and wheat from the mission farm at Te Waimate, but the building was mainly leased as a kauri gum trading store.

Built by Maori sawyers and missionary carpenters from the London-based Church Missionary Society in 1820-21, Kemp House predates the signing of the Treaty of Waitangi by almost 20 years. Nestled in the shadow of Hongi Hika’s Kororipo Pa, Kemp House is the sole survivor of the Musket Wars of the 1820’s.”
In 1976, the Stone Store was bought by the Historic Places Trust. 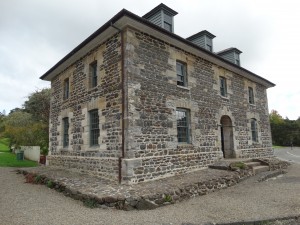 Today, you can shop for authentic frontier trade goods & classically branded Kiwiana products recalling the great Kiwi summer holiday & the Stone Store’s place in history as a Northland tourism icon. Enjoy a tour including a large range of furniture and personal items owned by the missionary families who lived here – including James and Charlotte Kemp.

The NZ Historic Places Trust wants to hear about strange sightings at the Stone Store and Kemp House, after an unusual security call-out recently.
HPT Staff were alerted that a woman with grey hair had been seen standing in the central dormer window of the Stone Store at 10 o’clock at night.

Mr Clunie, who supervised the restoration of the Stone Store, says reports of ghostly figures at the Stone Store and Kemp House are shades of the ‘little grey nun’ who allegedly peeped out the dormer windows at Pompallier, where sadly there weren’t no nuns never.

From The Bay chronicle….

A new mystery sighting at the Stone Store adds to a number of others reported during the years.

From Australia, visitor Sarah Stephens sent the Chronicle a digital photograph taken recently by her husband, showing what they thought could be a ghostly presence standing at the central dormer window.

“If you zoom in on the picture and look at the top centre window, below the roof, it looks like the face of an old man… the face is in the lower top half of the window and it looks a little like he’s wearing a white shirt. To me it even looks as though there is a smaller face to the right of him,” she says.

In 2005, Historic Places Trust staff were alerted that a woman with grey hair had been seen standing in the central dormer window of the Stone Store at about 10pm.

The person who reported the sighting insisted he had seen someone in the store. The figure, he said, had looked straight at him and then moved away. 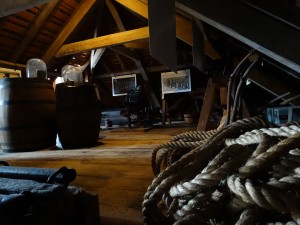 Trust area coordinator Stuart Park said at the time visitors occasionally mentioned that they had seen an old man on the top floor of the store or a woman in a bedroom in Kemp House.

Asked to expand on their recent experience Sarah said: “My husband took the photo and hadn’t noticed anyone in the window at the time. I noticed it later when I was going through the photo’s. I had the camera plugged into the TV so was viewing the photos on a large screen.

“When my husband and I visited Kemp House and the Stone Store the year before we had a bit of a freaky experience in Kemp House but put it down to our imagination. We thought we saw the curtain move in the upstairs bedroom but there was not a breath of wind that day… probably nothing but it did make the face in the window seem even stranger.” 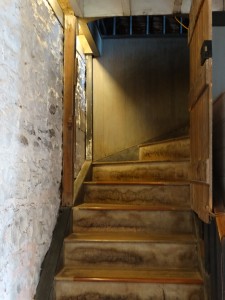 So the Chronicle took clairvoyant Judie Roberts to the Stone Store to see what she thought.

Judie is a newcomer to Kerikeri and had not been into the Stone Store. Arriving before the 10am opening time, she walked around the outside and into the gardens initially.

“There is someone here. I’m not good on names but the name ‘Thomas’ is very strong. The last name could be Wai or Wade but I’m not sure about that. It’s as if he looks after the place. There was a shed behind the Stone Store and he’s glad that it has gone. He came from the United Kingdom and he was strongly connected with the Stone Store. Perhaps he owned it or looked after it. 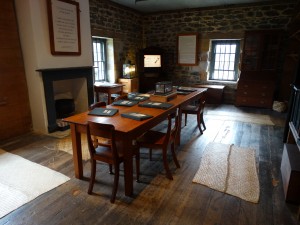 “He went up to the church and preached at times and he liked having a few drinks. He was a god-fearing man but he was naughty. He didn’t like getting into small boats. He would rather paint a fence than go out in a dinghy. But he’s upset about a picture in the store. It’s something that he finds offensive.

“He must have enjoyed the gardens. In those days there were more trees and a veggie garden. He’d like to see more veggies. And if they – the Historic Places Trust – are looking at changing things in the garden, it’d be alright if they asked him first.”

Once inside the Stone Store, Judie found a portrait of Queen Elizabeth with moko by contemporary artist Barry Ross Smith. 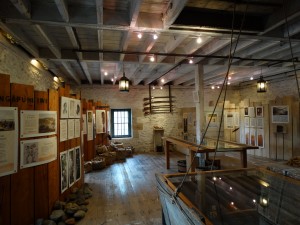 Googling ‘Thomas’ and ‘Stone Store, Kerikeri’, the Chronicle found biographical notes of a Thomas Chapman – 1792 to 1876.

Thomas and Anne Champman arrived at Paihia on August 1 1830, on the Active from Sydney, to work for the Church Missionary Society. The Chapmans were lay missionaries and were at Kerikeri from 1831 to 1833.

Thomas had charge of the mission store. Thomas is described as “experienced in farming, medicine and seamanship. Literate, liberal, good-humoured and resolute.” 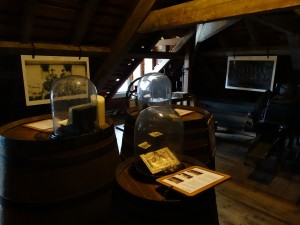 “Thomas Chapman had charge of the CMS store from April 1831 until June 1833, when he was replaced by James Shepherd. James Kemp was relieved of his storekeeping duties throughout this period because he was overseeing the construction of the Stone Store, so the store that was looked after by Chapman and then Shepherd is the old wooden one that was located on the land where the Landing restaurant is situated today.

“This original wooden store was one of the first buildings constructed on the mission station in 1819, and had small apartments above it where the early missionaries lived during the initial establishment of the mission. By the 1830s this wooden store was no longer suitable, deemed insecure and a fire risk. Chapman lived for a time in the Mission House before the Kemp family moved in to it in 1832, hence becoming Kemp House. 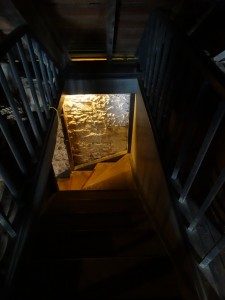 “When the missionaries first arrived in 1819 the only small boat they had was a punt, which made the long water voyage from Rangihoua to Kerikeri very arduous. There was a lot of toing-and-froing to get stores. In the early 1820s John Butler eventually purchased a whale boat, which made life a lot easier. The missionaries often travelled in waka too, paddled by Maori. The only Thomas that had anything to do with Kerikeri in the early days was Thomas Kendall, confidante of Hongi Hika, but he was based at Rangihoua first and then Matauwhi near Russell. However, he did nearly drown when his small boat capsized in the very early days. He left New Zealand in 1825 and drowned whilst sailing his small boat up the coast to Sydney in 1832.

“There were a few serious drinkers among the missionary folk, but none were named Thomas. The original chapel on the hill dates from the 1830s, the St James Church from the 1870s. 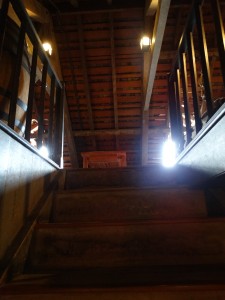 Liz says Butler established an extensive garden that covered almost the entire area behind the house and including car parks below the church.

“He also planted lots of fruit trees – 150 in one day in 1819. Everybody had large vegetable gardens until quite recently.

“I really don’t think that the Thomas mentioned is Thomas Chapman, he’s buried near Rotorua and served that area for most of his life in New Zealand.”

Later Liz recalled that there was a Maori gardener at the property called Tamihana, which is Maori for Thomas. His last name was Maitarahanga.

“According to St James church records he died in 1904, reputed to be 100 years of age according to Kemp family tradition, and is buried up in the St James churchyard in an unmarked grave. He lived in a little cottage behind Kemp House, which can be seen in a few early photos of what was then the Kemp family property. His nickname was ‘Tutu’.” 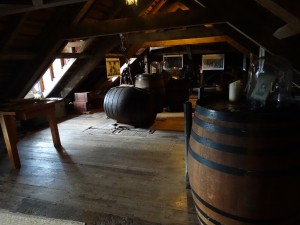 Kemp family tradition has it that Thomas or ‘Tutu’ was taken in by the missionaries as a young boy after he was captured and brought back as a slave to Kerikeri with one of Hongi Hika’s taua – war parties – in the early 1820s, she says.

“A picture of him as a very old man is hanging on the first floor of the Stone Store. Rev John Butler records that he took into his household four children in February 1822, from a returning war party – a baby younger than 12 months, a boy of about four years of age, a girl of seven years and a boy of about 12 years. What is known as Kemp House now was designed and built for Rev John Butler, and was completed in 1822. Before moving into the house the Butlers were living in a barn behind it, about where the office-cottage is today. When the Butlers left NZ the children they’d taken into their household remained on the settlement.” 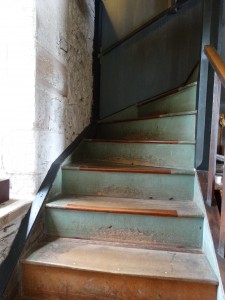 Liz says out of some 45,000 visitors to the Stone Store per year, a few do speak about feeling a presence in the store but, more particularly, Kemp House.

“The accounts are always very similar, which is interesting. People relate to this site in a myriad of ways, it’s so interesting and has such a dramatic history, it’s good to know that people continue to invest this place with so much meaning.” 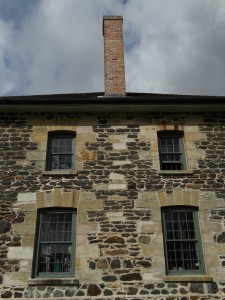 Haunted Auckland recently spent a couple of hours within the stone walls of this fascinating location.

The investigation, though not long enough to get as in-depth and controlled an investigation as we would have liked, entailed a full photographic sweep of the inner and exterior, EVP communication attempts, static video camera recording whilst EMF (Electromagnetic field) and temperature levels were monitored and data logged on both levels. 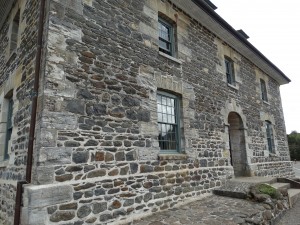 No unusual EMF field levels were detected. The location read ‘flat’ throughout the full 2 hour session.

No unusual audio was found on analysis.

No anomalies turned up on both video and photographic equipment.

As this wasn’t a typical, full and lengthy session, we weren’t able to conduct as thorough an investigation of the building as we would have liked.

For now, we are on the fence as to whether or not the Stone Store is a haunted location, as nothing was recorded to give any indication otherwise.

Perhaps a return visit in the future will be arranged.