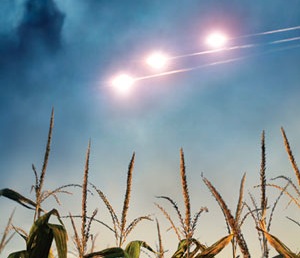 It appears as though a dozen or so UFO sightings that were reported to San Antonio police earlier this month have been explained. A local news station broadcast the story about illuminated globes that were spotted floating over the Alamo City by several residents on the evening of May 17. One eyewitness named Roger Barrera even managed to videotape one of the strange objects as it passed over his home. As it turns out, Barrera’s neighbor has claimed responsibility for launching what are known as sky lanterns — essentially paper balloons that float in the air, elevated by the heat of a small candle that is placed in the center.

Nevertheless, Texas has played host to some notable, unexplained UFO flaps over the years. During the fall of 1951, the Lubbock Lights were observed and photographed by many people in that community, including three professors from Texas Tech University. The lights were generally described as several, bright orbs flying in a “V” formation. Never solved, it stands as one of the first significant cases in the history of the UFO phenomenon.

Clearly the most important wave of recent years has centered around the town of Stephenville, Texas, which lies about an hour southwest of Fort Worth. Beginning in January of 2008, residents allegedly began to observe an enormous object with flashing, multi-colored lights gliding silently overhead. Some even reported that they had spotted military jets in hot pursuit of the thing. A subsequent investigation by the Mutual UFO Network or MUFON turned up radar evidence that seemed to back up the claims. According to researcher Ken Cherry who headed up the main inquiry, there were hundreds of residents that described sightings, though Cherry feels that many of those can be written off as mass hysteria. He did tell me via phone recently that he felt “convinced there was something there,” based on the radar findings and testimony of several law enforcement officers.

Long-time MUFON field investigator Al Schuette stated that one video he examined could be attributed to a misidentification of the planet Venus. Paranormal researcher Eddie Hill of San Antonio has mounted an independent investigation into the Stephenville mystery. In a recent phone call, Eddie told me that he felt many of the reports could be attributed to missile tests and aircraft flares stemming from military craft. Though, at least one witness he interviewed clearly saw something else; and in fact claims that he was visited by real life Men in Black who, advised him not to talk about his sighting.

Have any readers sighted something over San Antonio that could be considered a UFO?