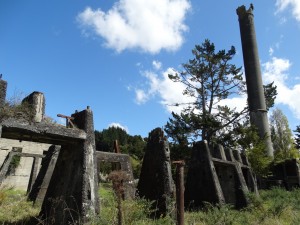 The founder of New Zealand’s cement industry, Nathaniel Wilson (1836-1919), emigrated from Glasgow with his family when he was 6 years old. Nathaniel initially trained as a shoemaker, but in 1864 he purchased a small piece of land adjacent to his parents block south of Warkworth village. John Southgate had been making lime since 1851 by burning local limestone in a kiln.

The cement was used in the Queen Street sewer and other Auckland construction projects. But it was not until manufacturers could produce high-quality cement (known as Portland cement) in 1865 that they could compete with imports. The cement was shipped to Auckland from a wharf on the Mahurangi River.

After overcoming some initial local opposition to his cement, Wilson’s business expanded and in 1903 it employed 180 workmen with an output of 20,320 tonnes per annum. It was in this year that the large unreinforced concrete building which forms the most important part of the ruin was erected. Despite its dilapidated state this structure is still an impressive sight with walls 228mm thick, 12m high and 18.3m in length.

Although Wilson’s invested heavily in new machinery and processes, by 1918 the company was voluntarily wound up and amalgamated with the New Zealand Portland Cement Company, whose works were at Limestone Island. It was there that most of the cement was then produced, while the Mahurangi works focused on hydrated lime. By 1926 the closure of the works was imminent and machinery was transferred to Portland (near Whangarei) before the Mahurangi works were closed in 1929.

Today the whole complex makes a picturesque ruin next to the lake formed by the flooded quarry alongside. As the remains of the first Portland cement works in the southern hemisphere, the ruin is of undoubted historical significance and in terms of industrial archaeology being a testament to the pioneering efforts of Nathaniel Wilson in this field.

There have been many reports of mysterious shadow apparitions moving amongst the stones. Odd lights, screams and the sound of a something like a generator coming from deep within the crumbling ruins.