When I was about six, our family lived in Christchurch in an old rented three bedroom house on Selwyn Street in Spreydon. Sometimes I would wake up and there was a war on my bed with little people dressed like the King, soldiers, horses and canons, other times a tall soldier would walk out of the wall and go into the old wooden wardrobe or sometimes the other way around. There was never any noise. I never told anyone this as I know no one would believe me. Years went by, we moved around a lot, even overseas and we ended back in Christchurch when I was 15. 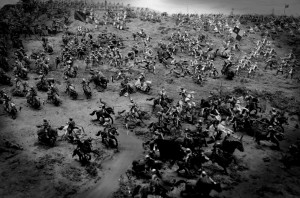 One night when I was with my brother and some friends we started taking about ghosts and if we believed in them. I almost sh*t my pants, my brother told me what I had seen and he too said he had never told anyone as he also thought no one would believe him. He also said the dogs would bark at the old wardrobe when this was happening. This night is so vivid in my mind, I can still remember the actual spot in the park and still taste the salt and vinegar chip sandwiches we where eating.

As more years have passed, we told people about this, but not many people have believed us. My brother took his own life when he was 20, and left behind a 9 month baby. We lost contact with the mother but caught up with her about 12 years ago. I got her address and when to see her, my niece was about 9 years old.

Out of all the houses in Christchurch, what would be the chance that she was living in the house that my brother and I had seen the guards, she was even in the same room, and the old wardrobe was still there. I will be 40 soon, and every time I think about this my whole body is covered in goose bumps. I have never told my brothers daughter what we had seen in her old bedroom.