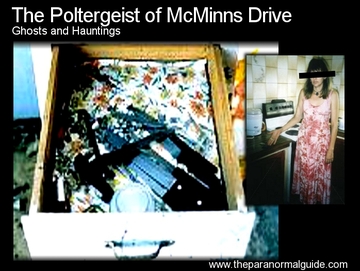 Over a five month period, knives, broken glass, lids, bottles and many other objects were thrown about in a house at Humpty Doo, NT, Australia. The picture above shows an assortment of the objects, collected after being hurled by an apparent poltergeist.
The story became big news, and many investigators attempted to solve the case.
One theory was that the spirit of a man who was still living was responsible. Another was that it was the spirit of a recently deceased friend.

We  have taken a good look at buildings that have been haunted by the  spirits of people long past, but can a house be haunted by the spirit of  someone who is still alive? For five months in 1998, a small  collection of family and friends were terrified by events that took  place in their rented bungalow, in the town of Humpty Doo, 40kms  south-east of Darwin, Northern Territory, Australia.

The ‘Humpty Doo Poltergeist’, as it became known, was at the time one  of the most well reported cases of a haunting in Australia. News crews,  journalists, investigators and priests all entered the house with a  skeptical mindset, but the events that took place around them swayed  their beliefs. Unfortunately, as was the case with UK’s  ‘Enfield Poltergeist’ some twenty years earlier, this ‘spirit’ did not  like to be caught on film.
Only a few pieces of evidence were gathered  on tape as they took place, the spirit preferring to act when the  cameras were facing away, or had been turned off completely. Sometimes,  as would seem is the case with such events, electrical gear would  malfunction, making the attempt to capture evidence even more  frustrating.
The activity was generally limited to acts of  physical force, regardless of how it was manifested. Objects would be  thrown around the house at all times of the day.
Knives, broken glass,  lids, bottles and other objects would be aimed at the occupants,  visitors and generally cast all about the place. (later,  investigations found that thrown objects when viewed through a thermal  camera had an evenly distributed heat signature that proved to be hotter  than their surroundings.
No finger mark traces or palm print heat  signatures could be found) At one stage gravel and shells were  said to rain in through the ceiling.
One of the more intriguing forms of  activity were words found around the house, spelt out with ‘scrabble  tiles’. Fire, Car, Skin, TV, No Cameras etc could be found spelt out in  seemingly random places.

The Activity Gets Violent, Theories…

After  the symbol of a trident and a cross had been found, made of pebbles in  the drive, the occupants called for priests to come and cleanse the  home.
The priests (of two different denominations) did not go  unscathed.
Bibles were ripped from their hands, to be found afterwards  missing pages, one of the priests arms was forcefully pulled behind his  back, pinning him in a kneeling position, and a .44 Magnum bullet  slammed into a table as one priest was praying. The owner of  the house tried to get the occupants evicted, on the grounds they were  destroying the house.
The judge saw in favour of the occupants, they  were not damaging the house, but rather an unseen force was. However,  less than a month after the ruling, the occupants had had enough and  moved out. The building was renovated and the ghost was no more. So what was happening here? Who or what could be causing the disturbances?
Two  months before the activity started a friend of the family had died in a  car accident, burnt to death as the paint thinner he was transporting  exploded. His name was Troy, Troy also being a name spelt by the  scrabble letters. Five  years earlier, the person who had been living in   the house had been  evicted by the bank. For twenty years he had lived   in the McMinns Drive  Bungalow, and he was not happy to be forced out.
He stated that it was  his own spirit, his own energy, manifesting in   anger while he slept.

It should be noted  that in one piece of televised evidence from the  house, that the  reflected image of someone throwing an object was  spotted.
When  questioned, one of the residents owned up saying they were  desperate  for people to believe them. Is it possible that all the  events that  occurred could have been hoaxed?
Many  claim it  would be impossible, and would have to refute the testimonies  of  reporters, investigators, priests and anyone else who had witnessed  the  events that took place over those five months in 1998.
Ashley Hall