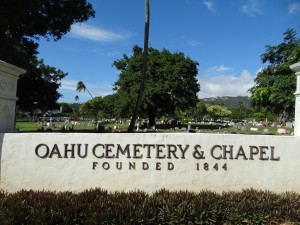 The O’ahu Cemetery is the resting place of many notable early residents of the Honolulu area. They range from missionaries and politicians to sports pioneers and philosophers.

Over time it was expanded to become an area known as the Nuʻuanu Cemetery. It was the first public cemetery in Honolulu, founded in November 1844. Due to the growth in the whaling industry, discussion had started in 1836 on the need for a new burial ground that was not associated with a specific church. The 4.38 acres (1.77 ha) site was purchased for $300 and $350 granted for a house. The money was raised by selling subscriptions on 59 plots of $12 each. Later another 3 acres (12,000 m2) were purchased from Gerrit P. Judd to expand in 1860. Rev. Samuel C. Damon served on the cemetery association in the early days.

The first recorded burial was American sailor H. Wolley, for $2.50.

In 1906, the first public crematory in the Hawaiian Islands, designed by architect Oliver G. Traphagen opened at the cemetery.

After the attack on Pearl Harbour in 1941, all paper currency on the islands was withdrawn and replaced with Hawaii overprint notes, in case the Japanese invaded. Faced with the task of quickly destroying $200 million of cash, the crematory at the cemetery was used to burn it, instead of risking transport to the mainland.

However, progress was too slow, so the larger furnace at the Aiea sugar mill was also used.

An area called the Seamen’s Lot contains many unmarked graves for sailors, provided by the Honolulu Sailor’s Home. Another plot is dedicated to firefighters, marked by a monument 15 feet (4.6 m) high. Two dozen were killed by strafing in the December 7, 1941 attack.

In 1863 King Kamehameha IV built the Royal Mausoleum of Hawaii across the street for the Hawaiian royal family.

In Punchbowl Crater (to the south) the National Memorial Cemetery of the Pacific was founded in 1948. Just north of the Royal Mausoleum, the “Nuʻuanu Memorial Park” was added in 1949, with its own funeral home.

In 1958 a Japanese cemetery was added on adjacent land called “Honolulu Memorial Park”. 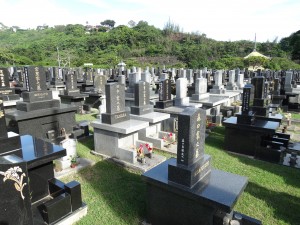 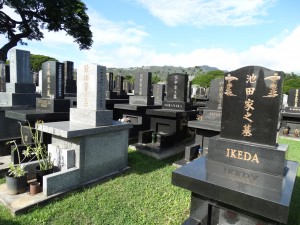 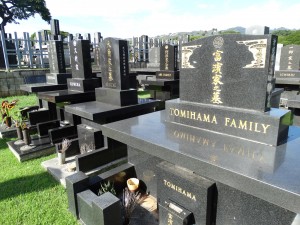 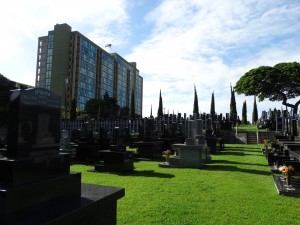 One of the buildings is a replica of a Buddhist temple. They are listed on the National Register of Historic Places.

Strictly speaking, the original 1844 cemetery is called “O’ahu Cemetery”, although the extended area is often called “Nuʻuanu Cemetery”after the area.

In 1989 a funeral for Ferdinand Marcos was planned at the mortuary, but instead the body was kept refrigerated at the Byodo-In Temple until it was flown back to the Philippines in 1993.