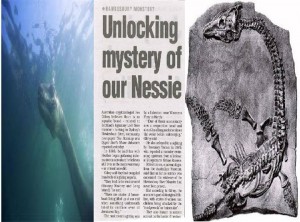 In New South Wales lies the Hawkesbury River, home to one of Australia’s strangest cryptids.

The beast, known simply as the Hawkesbury River Monster, is a kind of aquatic lizard, much like the Loch Ness Monster of Scotland.  Descriptions of the creature liken it to the prehistoric plesiosaur, extinct for 70 million years.  Sightings report that it is between 7 and 24 meters long.  It supposedly has two sets of flippers and a lengthy, snakelike neck and head.

The monster was first heard of by settlers in the 1800s, although there is Aboriginal rock art over 3-4000 years old in the area that describes the creature.  The settlers were told stories by the Aboriginals of woman and children being attacked by the moolyewonk or mirreeular, both of them Aboriginal names for the monster that lurks in the river.

Much like its Scottish cousin, the Hawkesbury River Monster has gained significant attention from the scientific world.

Many hunters and crytozoologists have spent decades trying to locate and/or catch the monster.  There have been hundreds of reported sightings, so the odds are the monster hunters will be scouring the area for many years to come.