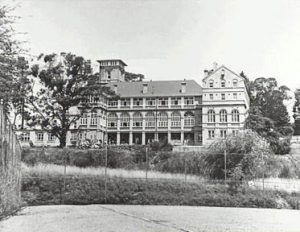 As I was wandering around Katoomba, Australia, on my way to photograph the local old cemetery, I stumbled upon this incredible beast of a building. Have to say my mouth was pretty wide open for the whole time I spent taking it all in! It’s huge!

It was closed to the public and totally surrounded by high fencing and ‘No Trespassing’ signage. I went around the back and called out to a guy that was inside the fence, about to get into his car. He helped out there as a caretaker. He came over and we chatted for a bit. Unfortunately, he couldn’t allow me access to any of the building as there is currently a police investigation being conducted due to serious ongoing vandalism. The place is constantly being broken into by kids / young adults looking for a place to party…or just mindlessly smash up.
He told me there had been thousands spent on new flooring and painted walls that were, in a matter of days, splashed with paint, set on fire and had walls, windows and doors kicked in. I was bummed I couldn’t get in to document this amazing piece of real estate, but fully understood the reasons. Would be very keen to hear from anyone with any legally obtained interior photos or perhaps stories from those that once resided there. Also interested to know more about the resident ”ghost nun” that wanders the lonely, dark halls.  – Mark

The heritage listed Mount St. Mary’s College and Convent was listed for sale under instructions from the mortgagee.

The imposing and haunting building is said to contribute great aesthetic significance in the cultural landscape of the Blue Mountains and is a significant landmark in Katoomba.

The convent was designed by Nangle and Nurzey (later known as Henry E Budden & Nangle)and built in 1909-1910 for the Sisters of Charity, and shortly after completion they began accepting boarding students.

“The complex of buildings elegantly demonstrate the Federation Free Classical style ecclesiastical architectural language. In addition, the extensive hard and soft landscape design elements define a number of official, religious, utilitarian and recreational zones associated Catholic institutions. The scale and setting of Mount St Mary’s reflects a significant period in the growth and development of Catholic educational institutions in NSW and their subsequent decline as a regional presence across the State.” – NSW Government Environment and Heritage.

The Federation Free Classical style is considered uncommon in eastern Australia, and Mount St Mary’s is a notable example of its use in country New South Wales.

“Mount St Mary’s provided a place of refuge in times of war and fire. When Australia and the Allies declared war on Japan on 9 December, 1941, fears were held for those Orders living and working in close proximity to Sydney Harbour. As a consequence St Vincent’s Convent which was located near war ships in the harbour decided to transfer the Novices, Postulants and the boarders temporarily to Katoomba.” – NSW Government, Environment and Heritage.

The building is even said to have a ‘dungeon’ which was to be used as an air raid shelter incase bombing raids were ever conducted in the Mountains. There is also a rumor of a tunnel running from the centre to the railway station and connecting to St. Canice’s Church in Katoomba Street.

In 1946, the convent was extended. In the 1950s a primary school bungalow was added, and a science block was added in the 1960s. The school closed in 1974 due to declining enrollments.

In 1978, it was gifted to the Archdiocese of Sydney to be used as an educational and religious retreat until 1984, when a fire order was placed on the building and it was closed down. The costs to bring the building up to code were prohibitive, so the Church decided to sell the property. The tendering process was unsuccessful and the property was eventually put up for sale for $425,000. It was purchased in 1985 by John Patterson, Pamela Ruth Patterson and Liborio Donivito with the intention of turning it into an arts-focused tourist attraction.

It was reopened as “The Renaissance Center” in 1987 and operated until 1992, when it was sold to Crestown Pty Ltd (owned by the Mazza family of Sydney) for $1.4 million. Tenants gradually began to move out and the building became vacant and subject to substantial vandalism.

In 1998, owners Anthony and Paul Mazza were looking for tenants to lease the property. They suggested the property was suitable as a hotel or for a tourist-oriented business, but the dilapidated condition of the building made it impossible to find a tenant.

In 2001 there were discussions with the building’s owners about using it as a tertiary institution for a university campus, but no agreement was reached.

In 2002, a local action group called the ‘Renaissance Action Group’ lobbied for the building to be heritage listed, and were successful when it received a listing in 2003.

It was listed for auction in July 2009, but did not sell.

“The complex of buildings elegantly demonstrate the Federation Free Classical style ecclesiastical architectural language. In addition, the extensive hard and soft landscape design elements define a number of official, religious, utilitarian and recreational zones associated Catholic institutions. The scale and setting of Mount St Mary’s reflects a significant period in the growth and development of Catholic educational institutions in NSW and their subsequent decline as a regional presence across the State.” – NSW Government Environment and Heritage

The 17,652 sqm site had development approval for restoration of the building as well as the construction of 122 apartments, although this DA recently lapsed. A series of fires in 2003 caused damage to some elements of the property, including the central tower, and another fire in 2010 caused $100,000 in damage.

Subsequent years were ones of slow deterioration when the College halls witnessed only the work of vandals and the quiet, sad restlessness of the ghostly nun who wandered the upper dormitory.