Cryptozoology can be separated into three classifications:

Creatures like the Tasmanian wolf, the Marsupial Cat and the New Zealand Moa. No animal has had more speculation heaped upon it than the Moa. These birds evolved around 85 million years ago on the southern Super-continent called Gondwanaland. They belonged to a group known as Ratites; the family includes Ostriches, Emus and the extinct Elephant Bird of Madagascar. Once New Zealand separated from Gondwanaland and became isolated it enabled the Moa to survive in a relatively predator free environment, filled with avian fauna, the only mammals present were three species of small bats.

Recently discovered fossil evidence further seems to indicate there was a species of both Python and Crocodile which may have included Moa on the menu.This isolation enabled these birds to obtain a wide variety of sizes, from small Turkey sized species such as Euryapteryx curtus to the gigantic Dinoris giganteus which stood 4 meters tall and weighed in at 250 kilograms. All Moa species were herbivorous browsers. They ranged in habitat from the alpine regions to the coastal areas.

The main mysteries surrounding this bird is when did it become extinct, or if it is in fact extinct. It has been implied the Moa was already on the decline before the human colonization commenced; evidence from Maori butchering and cooking sites show there must have been an abundance of birds, judging by the wasteful practices engaged in the butchering process. Meat from the thighs were primarily used, the remainder of the carcass was left to perish.This is rather surprising, Maori of old were very conservation conscious to ensure resources were not overtaxed. This was accomplished by oral tradition and folklore; seasons set out for hunting different species guaranteed a recovery period.Even the name Moa is somewhat of a conundrum, it does not appear among the oral traditional legends of the Maori, the term used to widely make reference to this bird was Tarepo.It seems generally accepted that the large species were supposed to have been extinct by the early 1800’s, and if not already extinct by then, they had become extremely scarce. However if is plausible that some of the smaller species, neglected as a food source because of their bigger relatives may have persisted longer.The mid to late 1800’s produced many reports of large birds witnessed in isolated areas of bush; this was an era of exploration, regions were being opened up for settlement. Many reports focused on the South Island, as gold prospectors and surveyors pushed into the isolated interior areas.One of the most curious reports of this period includes a confrontation between a sheep dog and a Moa, the Moa turned on the dog after being harassed, once the dog backed off, the Moa was witnessed to bob its head up and down in the direction of the dog in what seemed to be a possible threat posture. 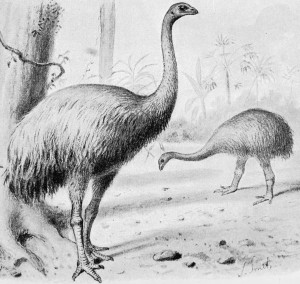 1931 and 1960 saw further reports of large birds in the bush of the South Island, in 1989 a pair of birds were observed by trampers, once more in the South Island.All accounts seemed to involve the large species of Moa.In 1990 there were several sightings of large Birds, in the Arthur’s Pass district, and tracks were found on two occasions.The most recent sighting caught World Media attention. On January 20th 1993 three companions were tramping the Craigieburn Rangearea, Paddy Freaney, Sam Waby and Rochelle Rafferty. Mr. Waby paused at a secluded stream for a drink; Paddy Freaney’s attention was drawn to a large bird which was nearby watching them. Freaney drew the attention of his associates to the bird, which then panicked and fled. Freaney chased the bird, with camera in hand, and at an approximated 35 meters got the now famous photo of the bird; he further discovered and photographed, after loosing sight of it, wet bird footprints on a rock.These pictures were shown to a Department of Conservation Officer who expressed the opinion that the bird seemed very much like Megapteryxdidinus, a sub-alpine species of moa known to have populated the South Island.

Computer analysis was performed on the photo by Canterbury University,specialists at the University expressed the view that the photograph was of a genuine large bird and not some prop stage to look like one. Deer and other four footed animals were further ruled out. To add to the weight of evidence in support of the photograph being genuine,in the following year, 1994, a physician was tramping in exactly the same area the snapshot was taken; he came across browsing damage that was consistent with what is known of Moa feeding habits. In light of the corroborating evidence the Department of Conservation made no attempt to follow up on what certainly would have been the find of the century. Is the Moa extinct? Perhaps in some of New Zealand’s remote areas, and there are still a few,the species may still hold a tenuous grasp on existence. The sad fact is if it were to be discovered how simple it would be to conclude what was started in those Maori middens hundreds of years ago.