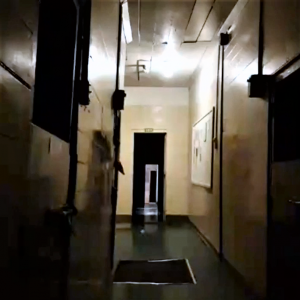 After a year-long gap, (well, it was only around this time last year, but seems an eternity!) I figured it was time to revisit this intriguing urban fortress.

The plan was standard. To spend the entire night, exploring and investigating the entire facility. Documenting everything as I go. Since we drove there, the car was full of gear. I figured I may as well use this opportunity wisely and cover as many bases as I possibly could whilst there. To keep in an alert and awake condition, I brought along coffees, energy drinks, chocolate and assorted snacks.

Love this place and it’s one of my favourite investigation locations. Was good to get back there roaming the corridors again. Basil the ‘phantom cat’ was also there to keep me company.

The room that I chose to stay in (Room 11- Guard Room) had had a lot of reported activity, with several people telling us stories about that cell. Staff told us of seeing a man sitting at the window looking out at the recreation yards, and apparently a mannequin left in the cell was moved to a different position when there was no one in the room.

This was also the room of the notorious “Eye Eater”, aka Kereopa Te Rau, who was incarcerated in the prison back in 1871 for the alleged ritualistic killing of Missionary, Carl Volkner at Opotiki on March 2nd, 1865. Kereopa tore out and swallowed Carl’s eyes, during the claimed brutality, calling one eyeball “Parliament”, and the other “Queen and British law”. He later repeated this gruesome act on three Ngati Manawa warriors who had been decapitated, soon giving Kereopa the fearsome status of The Eye Eater, or Kaiwhatu.

Kereopa was convicted and sentenced in December 1871 and was hanged at the Napier Prison on January 5th 1872. However, in 2014 as part of a treaty settlement, and due to many inconsistencies in the murder story, Kereopa was later pardoned and released of guilt for his part in Volkner’s murder.

I spent time in pretty much every room and every hallway. From the East Wing; Women’s Wing to the dark and ominous South Wing; aka Death Row. Outside at the Gallows hanging area, shower blocks, courtyard and in the various rooms previously inhabited by criminal gang members.

We’ve been trialling live Facebook video feeds at some of our recent, more relaxed and non time restricted investigations. They don’t hinder the investigation at all, are easy to set up and give our followers / fans a chance to come along with us on investigations and help out with monitoring specific areas of interest.

With this session, we had nothing but issues. Due to a poor Wifi connection, the live feed was forever cutting out. The live feed would freeze, stop or just disappear totally. With dodgy Wifi, I tried my 4G connection, nothing. Internet annoyances weren’t the only issues I faced that night. Batteries were continually being drained. My digital gear was malfunctioning. Cameras were struggling with keeping in focus. Videos set up to record, kept on pausing. I would check on the camera gear every 30 minutes or so, only to find that nothing had been recorded and were still sitting on pause mode or just stop without reason. A tripod mounted video camera and illumination lamp I had set up in Death Row, switched off, drained of power within a short 10 minutes; possibly less. Fresh batteries put in at the start.

It was frustrating to say the least. No decent continuous live feed, with about 40 or so keen online paranormalists waiting to watch and investigate with me. Gear that wasn’t cooperating with recording. Batteries that didn’t last.

I managed to stay awake till 3am. Figured I’d better get some shut eye for a few hours if I was going to be a pleasant driving companion on the six hour journey home.

This is the Facebook Live feed that I attempted during my stay, which unfortunately was riddled with technical problems.