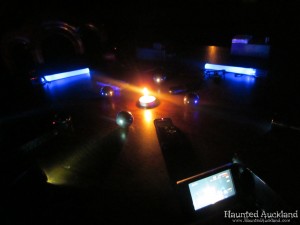 We currently have tenants living in the upstairs while we renovate upstairs. The things which come to mind are, the toilet flushing for no apparent reason, the stereo going on and off without anyone touching. My husband parked in the driveway at Easter and was upstairs in the house when his car stereo turned on, later he went to get in the car to turn it off after it happened a couple of times and a fuse either blew or something like that which required him to pull it a part and reset it as the clock and blue tooth also stopped working. This is very odd as the car was new in November. He then got in his car and drove to the local dairy, he walked through the front door and the two fridges either side of the doorway blew up at the same time and had the owner running around in a fluster. There are a few other things but these are the main ones we have discussed. The house is from the 70’s and has only had a couple of owners. It does not have a horrible dark feel but I have never encountered so many odd things happening which do not have an explanation.