The Effects of Atmospheric Scintillation 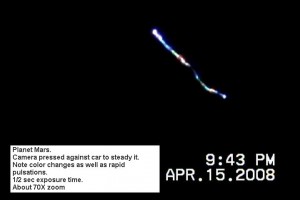 When the exposure time is a large fraction of a second the image of a distant light such as that of a star or planet can be changed from what it should look like, a bright white point of light, to a “squiggly” line (or smear or streak) which has varying intensity (varying image brightness)and varying colour along the squiggly line.  The reason for these changes in the image is a combination of (a) camera motion and (b) atmospheric scintillation.  Let us consider, first, the effect of camera motion.

Camera motion during the exposure time causes the image to become elongated into a straight or curved line.  Typically the camera motion is quite random, as when the camera is held by hand (not on a tripod and not rigidly clamped to a structure), so the elongated image looks “squiggly,” i.e., there are seemingly random straight and curved segments of the elongated image which could range from being a (nearly) straight line to being a closed loop (or several closed loops).  Experiments have shown that the amount of random motion or “squiggliness” increases with the magnification or “zoom” factor.  When a person holds the camera there can be small random variations in the camera pointing direction that are a result of breathing by the camera operator. Experiments have shown that when a single location on the camera body is pressed against a rigid surface, such as a car or a post, the slight body motion caused by breathing or by one’s pulse is enough to rotate the camera pointing direction by a fraction of a degree.  This small rotation is magnified by the “zoom” factor.  A typical video records 30 frames (pictures) per second.  The slight camera motion causes the image to move around in a random manner.  However, at 30 frames
per second there is not much motion during a single frame.  Hence the image in a given frame of a typical video is smeared only slightly by ordinary, uncontrollable hand motion.  However, when the frame rate is slowed, as in the “night mode” operation of a JVC type camera, the exposure time per frame is lengthened and hence the image elongation is greater (the length of the image increases with exposure time).  In particular, when the JVC-type camera is operated at night and a distant light or a star or planet is the object being recorded, the frame rate drops to 2/second or 1/2 second per frame.  The combination of this slow frame rate and the zoom magnification is sufficient to create very elongated images such as shown above and below.

Elongation as “Time to Space” Conversion

Consider, now, videotaping a light which changes rapidly in intensity or colour (or both).  Such changes would be detectable as variations in the image from frame to frame under normal operation (30 frames/second) when the camera pointing direction is perfectly steady (e.g., a tripod-mounted camera), as long as the time between changes was considerably longer than 1/30 sec, or, equivalently, the pulsation or oscillation rate were considerably less than 30 Hz.  (If the changes are at a steady rate, i.e., if they form a steady oscillation, that is faster than 30 Hz the changes could still be detected as an “aliased” signal, i.e., the apparent oscillation frequency as recorded by the camera would not be the actual oscillation frequency of the light.)  If, on the other hand, the frame rate is very low, it is still possible to detect variations in the light by using the “time to space conversion” effect (the operating principle upon which the “streak camera” is based).
In this case the camera is rotated to scan across the direction to the light so that at the beginning of a frame exposure the light image is at one point on the image plane (CCD in a video camera or film in a film camera) and at the end of the exposure time the image is at another point on the image plane. When this angle scanning is done at a constant rate there is a one-to-one correspondence between distance between two points at different locations on
the image and the time difference between those points.  The angle scan begins at one end of the elongated image and ends at the other end, so the total length of the image (e.g., as measured in microns or millimetres on the image plane) corresponds to the total exposure time.  If the image is of a steady light then the image has a uniform intensity along its length as long as the scan rate (e.g., in degrees per second) is constant.  If the scan rate is not constant, as happens with a hand-held camera, there are variations in brightness and width along the length of the image of a distant, steady light.  If the scan rate is constant and the light pulsates at a steady rate, this pulsation will show up as image brightness variations at regular intervals along the image.  If the scan rate is not constant the spacings between the pulses will change, with the spacings being roughly proportional to the scan rates (e.g., faster scan rate, greater distance between pulsations).
The pictures below provide illustrations of the “time to space conversion” effect as applied to the images of both steady and pulsating lights at a power station that was about 2 miles away.  The typical mercury vapour or sodium vapour street-lights do not emit constant light.  Instead they pulsate with the alternating electric current which powers them.  These intensity pulsations are fast and are not noticed by a person simply looking at the lights or even videotaping the lights with a camera mounted on a tripod (or other rigid mount).  However, if the camera pointing direction is turned, as described above, the “time to space conversion” makes the pulsations visible.  (A person can see the pulsations with the naked eye by turning his eyes rapidly while looking generally in the direction of one of these pulsating lights.)  An incandescent light, on the other hand, does not have brightness pulsations (or the pulsations are so small as to be only detectable with special equipment) because the thermal mass of the filament averages over the power pulsations in the alternating current.  In the pictures below one sees the time to space conversion images of both pulsating and steady lights. I obtained these images by intentionally turning the camera slightly while videotaping in the night mode so these are 1/2 second exposures.   The upper
red images were made by two red, incandescent lights on the sides of the smokestack.  The very bright (overexposed) white lights incandescent spotlights.  Both mercury vapour and sodium vapour lights created the lines which are made up of series of pulsations or “dot images.”  The atmospheric scintillation effect described below may also have affected the images. 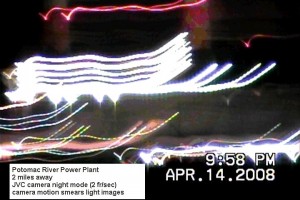 When light travels long distances (tens to hundreds of miles) through the atmosphere it is modified by the atmosphere.  The modification with which most people are familiar are the brightness pulsations or “twinkling” of stars. Stars which people can see are basically constant light sources.  Yet, when viewed through the atmosphere they appear to change randomly in brightness and, especially when viewed through a telescope or zoom lens, to move laterally by small amounts. Something else happens:  colour dispersion.  Colour dispersion is the basic property of a prism that “splits” light into its component colours.  The atmosphere can do this because air can act as a very weak prism.  When light travels long distances through the atmosphere the prism effect can cause light of varying colours to enter the camera aperture (lens opening) at varying times.  This effect of the atmosphere can be approximately duplicated by putting a triangular prism in front of a camera and shining a small light (or sunlight) through the prism so as to make the colour spectrum appear at the lens of the camera. Then rotate the prism slightly back and forth to make the different colours pass through the lens into the camera.

The images below show what the JVC camera recorded when pointed at the planet Mars, which is a reasonably bright
exo-atmospheric light source (basically a reflector of sunlight).  The light from Mars travelled many tens of miles through the earth’s atmosphere before reaching the small aperture of the camera.  The atmosphere caused the various colours of the light to arrive at the camera aperture at various random times, and these varying “bursts of a single colour” were recorded during the 1/2 second exposure time as variously coloured “image blobs” lying along the squiggly “time to space conversion” line.  Examples of this effect are shown in the first illustration (video frame) above and in the illustrations below.  (Note: the colour and brightness variations of the original images from the camera have been limited to 256 levels and by the .jpg compression that has been used to reduce the byte size of this article.) 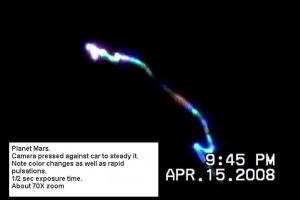 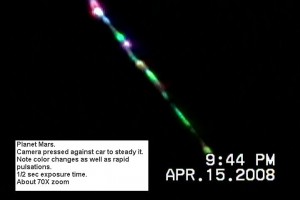 I obtained these images of planet Mars with a JVC GR D850 mini-DV camera at 40 – 70X zoom with one part of the camera pressed against the body of a car. I attempted to hold the camera perfectly steady.  There was no noticeable hand vibration caused by imperfect control of my muscles.  Still, the image moved. I then realized that the breathing and the pulse in my hand were enough to cause slight motions of my hands and these motions were enough to rotate the camera very slightly. I could not prevent the camera from rotating just by pressing one part of the camera against the car. Had I pressed a flat surface of the camera against a flat surface of the car I might have stopped the vibration.  However, I had no convenient flat surface that would allow me to press the camera against it and still be able to point toward the planet so I was limited to “single point stabilization,” which does reduce but does not eliminate the hand vibration, as would would happen if the camera were mounted on a tripod.

The image of a distant light (tens of miles or more) seen through the earth’s atmosphere as recorded on a hand-held camera, even one which is pressed against a solid support (at a single contact point on the camera), can be an elongated “squiggle” (a randomly curved or straight line) consisting of bursts or “dots” of varying image brightness and colour.  Sometimes a line image in a single frame (e.g., 1/2 sec exposure time) or motion of an image over several frames (e.g., at 30 frames/sec) is interpreted as evidence that the object or light being filmed was moving linearly or randomly.  This interpretation could be correct if it were known that the camera was on a tripod or that several parts of the surface of the camera were pressed against a rigid support such that the camera could not rotate in any direction.  However, unless the rigidity of the camera pointing direction can be assured, one must allow for the possibility or probability that the apparent image motion is a result of uncontrollable hand
vibration.

Dr. Bruce Maccabee is the author or coauthor of about three dozen technical articles and more than a hundred UFO articles over the last 25 years, including many which appeared in the MUFON Journal and MUFON Symposium proceedings.
View all posts by Bruce Maccabee →