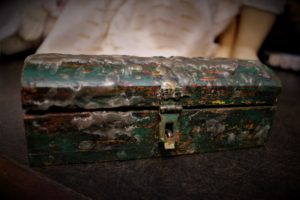 This piece in my collection, came to me around 1993.
Back then I was running a small music store in K’Rd, importing alternative and obscure music from around the globe. Because of its eclectic location, we would often get an eclectic mix of people coming in. Some to buy, some to browse and some just wanting company or someone to talk too. Sometimes a person would come in with a real love of the music we were selling, but had no money to pay for it. From the unemployed, to tourists who had read of the store and wanting to visit, to the drug addicted. We would sometime do trades. Old music for new music. Drug and alcohol offers for cds and vinyl were a common thing. (yes we did decline those ones) A few times we accepted oddities; from bizarre and cool hand made sculptures and a painting….and this.
This little box was brought in by a local junkie. He had no money, but really wanted a CD sitting on the rack. They had heard that I had an obsession with weird things so figured they’d try their luck on a music trade. They were in luck as I accepted the box as payment for the CD they wanted.
The box was discovered about five years prior. It was found by a flatmate, hidden up inside an unused and non functioning fireplace chimney. It was originally sealed completely with candle wax. The lock piece, hinges and all over coated with a thick layer. For what reason, no one knew, but assumed it was to seal the contents tightly. The box was opened and not knowing what it was for, only that it was a kinda cool (but creepy) thing to have found, the box was placed on the fireplace mantle piece, where it sat for many years gathering dust and quickly forgotten about.
Inside the painted and wax coated box, are bones. A mix of what apprear to be bird and rat. Possibly a couple from a cat as well, but I’m unsure. Also in the box are small pieces of quartz and amethyst crystal, a tooth and a disc from a large animal spine. I was told that there was also a silver ring in there, but that had since disappeared in time. A Google search on the crystals and contents show that the box was possibly being used in a spiritual protection ritual. Possibly a child’s pet burial ritual of sorts (though that could be a stretch as the parts contained are from three, maybe four animals) or an attempt at reincarnation or rebirth.
It’s an intriguing piece for which I’d really like to find out it’s true purpose.

Please let me know if you’ve seen or have something similar and what the connection of the bones and crystals might mean.

also, why was it sealed and hidden away in such an obscure place? 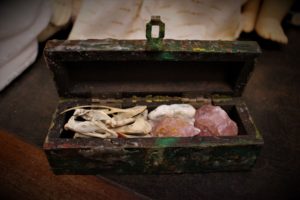