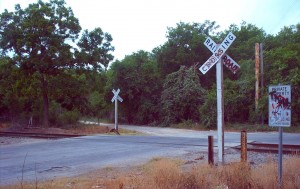 San Antonio is a city steeped in great history and perhaps not coincidentally, many perplexing mysteries. Amidst the centuries old Missions and brushy hollows there exist tales of inexplicable happenings and spooky haunts galore. But, conceivably the Alamo City’s most notable saga centers around the so-called haunted railroad tracks on the city’s Southside. Featured on popular television shows like Unsolved Mysteries and Science: Fact or Fake, the unremarkable little intersection at Shane and Vilamain Roads (near Mission Espada), consistently draws scores of curiosity seekers intent on having a supernatural experience. For, it is said that if one stops and leaves one’s car in neutral where the tracks cross the pavement, an unseen force will begin to move your vehicle until it has crossed over. Rumor has it that this intertia is, caused by the pushing of juvenile ghosts, the result of a tragic accident years ago where, a school bus stalled on the tracks and was struck by a train. It is further believed that if you sprinkle a little baby powder or flour on your rear bumper during the experiment, the impressions of tiny hands will appear. Some have even claimed that neighborhood streets derive their names from the victims of the bus tragedy. Others have remarked about having an eerie feeling at the location, as well as hearing disembodied screams. Though it makes for good storytelling on a moonlit night, the problem is that no one can find any record of such an accident in any newspaper or archive. Furthermore, the unexplained phenomenon may in fact be an optical illusion. You see, while stopped at the intersection it does appear that your car is facing uphill, when in fact there is a very slight downhill grade, resulting in forward motion. Still, it is worth noting that the area around the missions has spawned other claims of ghostly activity. Also, the San Antonio River runs nearby and rivers, as well as railroad tracks, are often associated with paranormal activity.