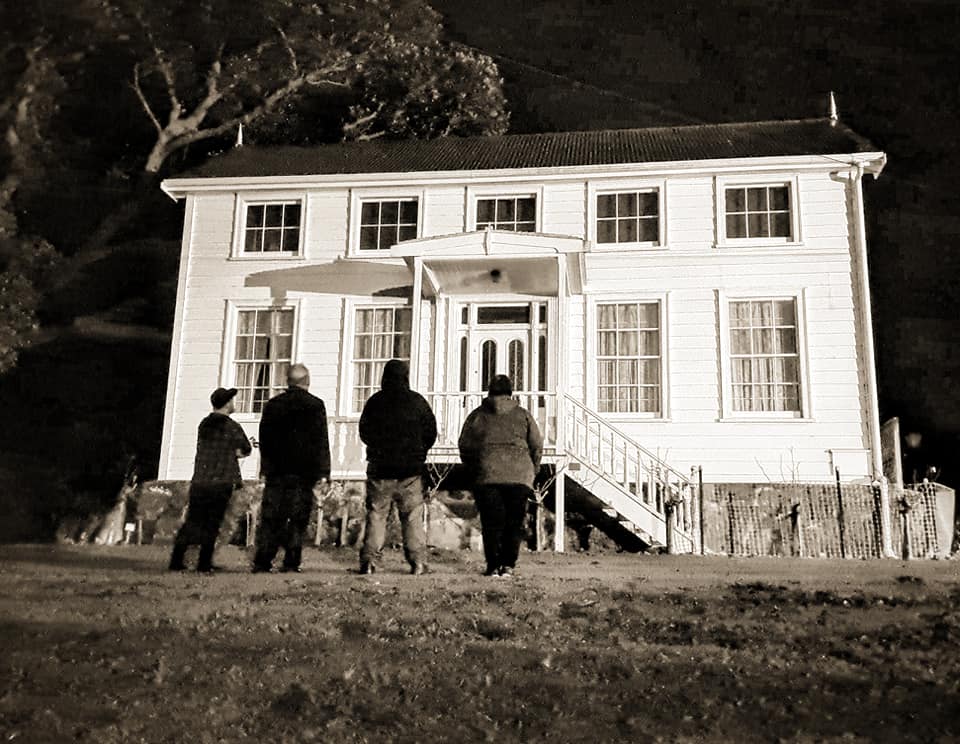 Onehunga is a suburb of Auckland City in New Zealand and the location of the Port of Onehunga, the city’s small port on the Manukau Harbour. It is eight kilometres south of the city centre, close to the volcanic cone of One Tree Hill (Maungakiekie).

The residential and light-industrial suburb, with its approximately 18,000 residents and almost 1,000 commercial and industrial businesses stretches south from Royal Oak to the north shore of the Manukau Harbour. To the east are the areas of Oranga and Te Papapa; to the west, Hillsborough. On the southern shore of the Manukau Harbour and linked to Onehunga by two bridges is the suburb of Mangere Bridge. Laishley House, a two-storied home, was built in 1856 as the manse for the first minister of the Congregational Church, Reverend Richard Laishley and his family.

It is now owned by Auckland City Council and was moved from Princes St in 1985, close to the old library (which is now a café) and was moved to its present position.

Laishley House was an interesting building; with a kitchen, lounge and bedroom having been fully restored to replicate how it would have looked in the era of Reverend Laishley.

One was displaying memorabilia from early Onehunga and the other had been set up to depict a children’s bedroom. All items in the house have come from the Onehunga area. 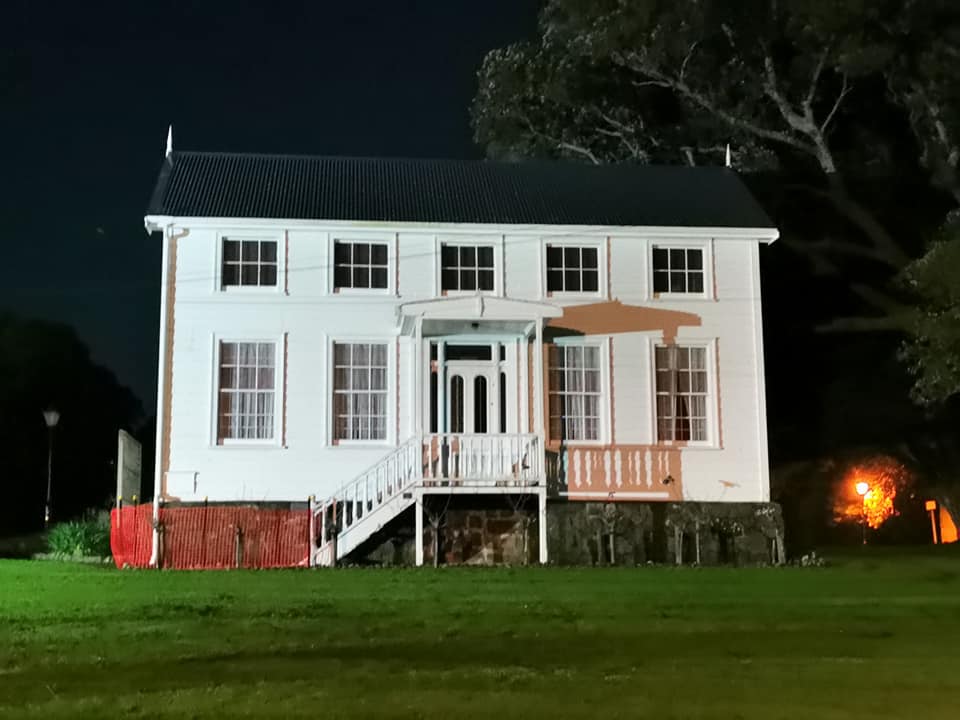 We entered the house through the back of the property and directly into the kitchen area which was decorated with a set dining table full of display fruits and loaves of bread.

In the corner of the kitchen stood a smiling mannequin dressed in an old-fashioned looking maid’s outfit. A short walk down the hall from the kitchen takes you to the front door of the house, the stairs to the second floor with entertaining rooms on either side.

Climbing the narrow staircase led you to two upstairs bedrooms, again on either side of the building.

It was noted however by most of the team, that one of the upstairs rooms appeared to be uneven – as though the floor was at an angle leaning toward the front of the house. This was in what would have been one of the upstairs bedrooms to the right when going up the stairs. The room was now filled with glass display cases, filled with trophies and historical memorabilia from both Onehunga and nearby Auckland suburbs.

There was a conversation within the team that the room “felt weird” or was “quite dizzying”. We came to the conclusion that perhaps the uneven flooring and the lower than usual ceiling could be creating a Fun house effect, messing with the perception of those that stay in the room for too long, especially when moving from the back of the room to the front and vice versa with the lean. This could account for some of the uneasy feelings reported by staff and visitors to the house. 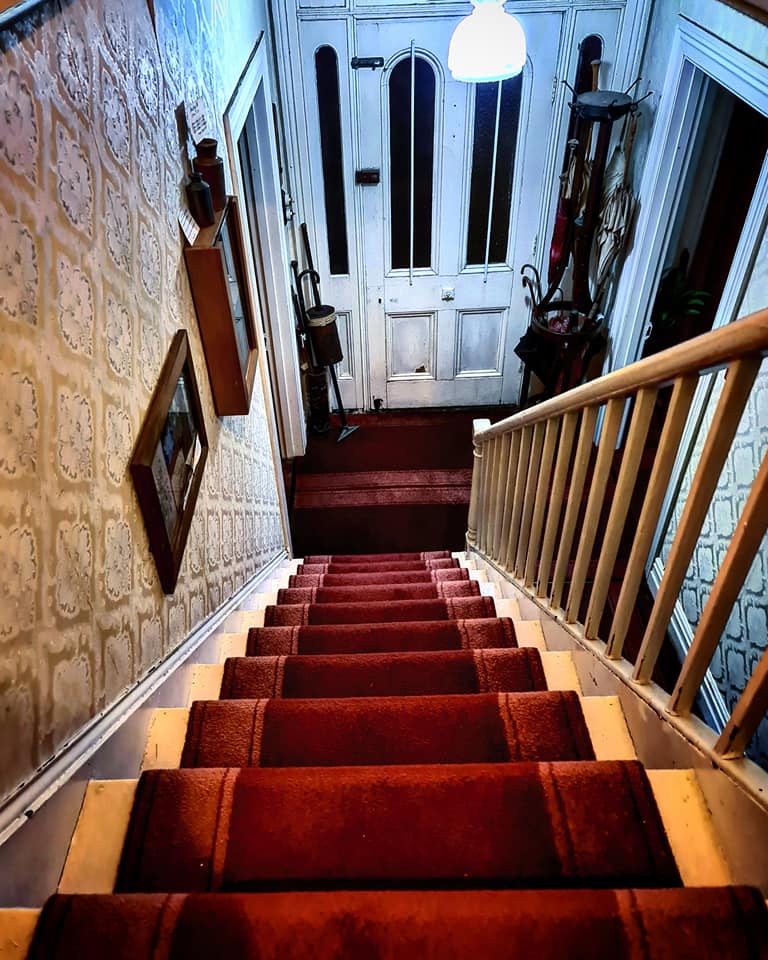 Sam – First impressions of Laishley House was that it was rather homely. Aside from the plethora for mannequins throughout the home and the ever so slightly claustrophobic feeling that I got from having display cabinets, trinkets and antiques all at elbows length apart in some rooms – the house was rather inviting and I didn’t feel unwelcome, nor did I have any real sense that there may have been a presence or anything that would otherwise make me feel “uneasy”.

Mark – I hadn’t been back here since our last visit back in May of 2013. Not much had changed layout wise. I did however note right away, the since forgotten sensation of dizziness in the upstairs museum display room. The uneasy feeling on that unlevel flooring returned. Such a weird, almost disorienting feeling!

Barbara – I found this building to be very small and compacted given the size of the rooms. There were 3 rooms downstairs including kitchen and 2 upstairs. There was a musky smell but as the home is old and there were rooms with mannequins clothed in old clothing, this would make sense.

Natasha – Very old and a museum. Filled with many NZ artifacts from all across Onehunga. Many weirdly contorted and posed mannequins in every room except the RHS bedroom. The rooms that stood out to me most as being interesting were the “museum” room / RHS bedroom upstairs AKA “Cock and Tap” room. The room is on a 1 degree slope. Also is the only room without creepy mannequins everywhere. I had heart palpitations and felt uneasy when I entered this room. No cold spots or anything else weird feeling in this house, though Sam, Barbara and Mark claimed to have felt “dizzy”, or semi-disorientated in this room. 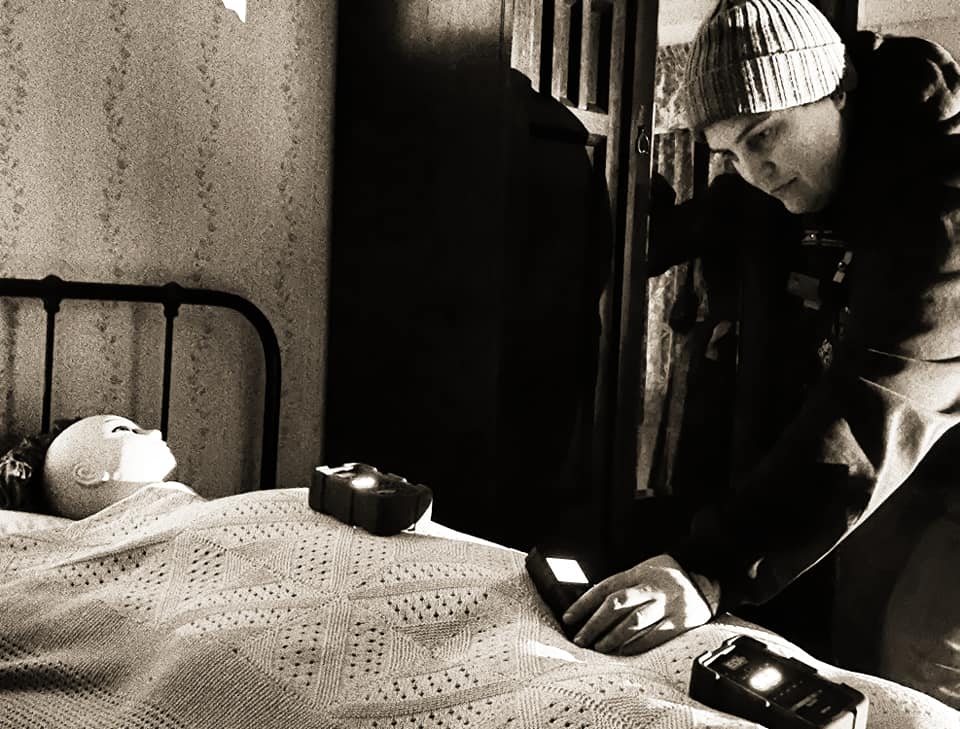 For this session we decided to keep things simple  and use a minimal set up, with easily managed equipment.

The team conducted communication sessions in all rooms of Laishley House in roughly 30 minute intervals.

For the session we’d set up a combination of IR night shot cameras, video cameras and still cameras on tripods with the intention of covering all angles of the room and ourselves in it. In addition to the cameras a single audio recorder was used to record audio for each session as well as 2 EDI+ Data loggers, (designed by Centex, U.S), to detect and record changes in EMF, ambient temperature, humidity and barometric pressure as well as being able to detect any sudden vibrations. EMF and ambient room temperature was also monitored with both a Mel and Meterk Meter, for comparison.

Surface temperatures were taken with a laser thermometer at the beginning of each session.

A REM Pod was left on the stairs throughout the duration of all communication sessions of each room as a ‘’trigger’’ alert piece. 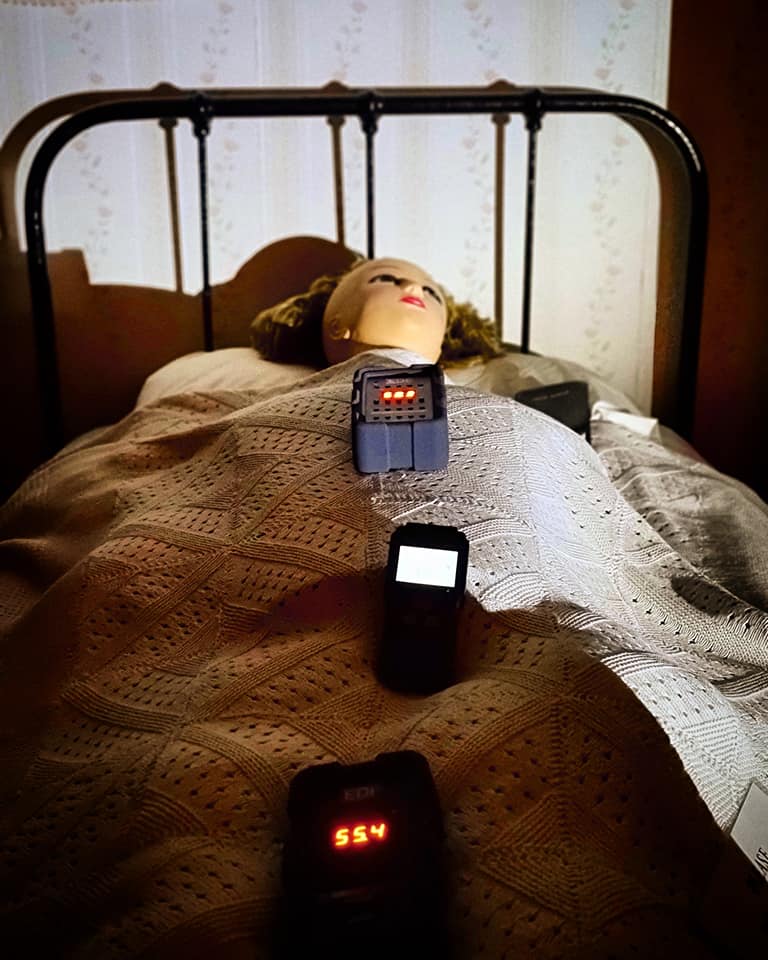 No unusual responses were detected during any of the communication sessions at the time or upon review of the recordings at Laishley House. No anomalies captured on photograph or video.

Barbara – I didn’t have any sense of feeling that the house may be occupied by anything. We didn’t record any activity in Laishley House or see or hear anything throughout the investigation. There was one upstairs room which we called museum room that did seem to have an odd even floor feeling but nothing out of the ordinary.

Natasha – I feel the museum room in Laishley house may have residual energy connected to all the artifacts from Onehunga being crammed in to one tiny bedroom. The room had a weird but wonderful feeling. It could have been due to the 1 degree slope of the upstairs though (I checked this on the rail of the stairs outside the room) but I and the other investigators didn’t get the same feeling in the other bedroom opposite (LHS of the upstairs). The mannequins were creepy though but not as creepy as the dolls.

Sam – Over all I thought Laishley house was an intriguing building. There was plenty to look at and study, I felt like walking into one of those “Eye Spy” books where there were so many interesting nick-knacks and trinkets about the place that you’d never be able to notice and appreciate them all in one visit – and I’m sure the rooms would appear to be different in appearance each time.

Do I think Laishley house is Haunted? Well we certainly didn’t experience anything on the night that would suggest it is, however in terms of investigations this was a relatively short one where it does become quite difficult to condense many years-worth of alleged ghostly stories into a few hours of investigation. Especially when there is no idea of when or where alleged activity occurs, or if there is a specific time or place at all.

So, to make an opinion on whether or not I think Laishley house is haunted or not would require much more time spent investigating. Fingers crossed. 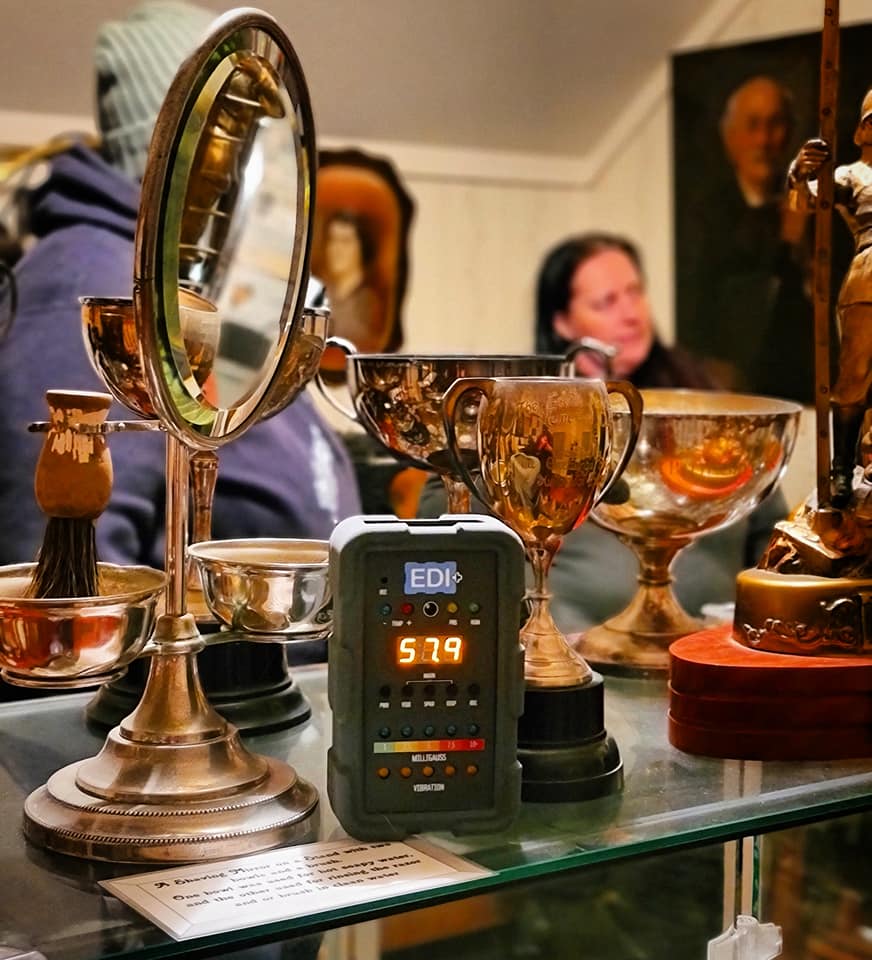 Mark – For me, I felt this session was very similar to our last visit back in May 2013.

It’s a beautiful old homestead with that genuine colonial feel, smell and character.

On this session I did not feel anything was out of place or unusual. Room temperatures stayed pretty much constant the entire evening. EMF field readings were low or even non-existent; a bit different to the last visit, where we measured a few random spikes and needle movement around the older light switches and hanging light fittings.

A few light temperature fluctuations this time around in the upstairs areas, but nothing id consider unusual or worthy of getting excited about.

During the night we did note a few knocks, clicks and creak. Nothing on cue to our questioning though, so with the wind, rain and temperature drop outside and the fact that the house is old, wooden and situated up on an open and exposed hill, we put this down to being just natural building movement. 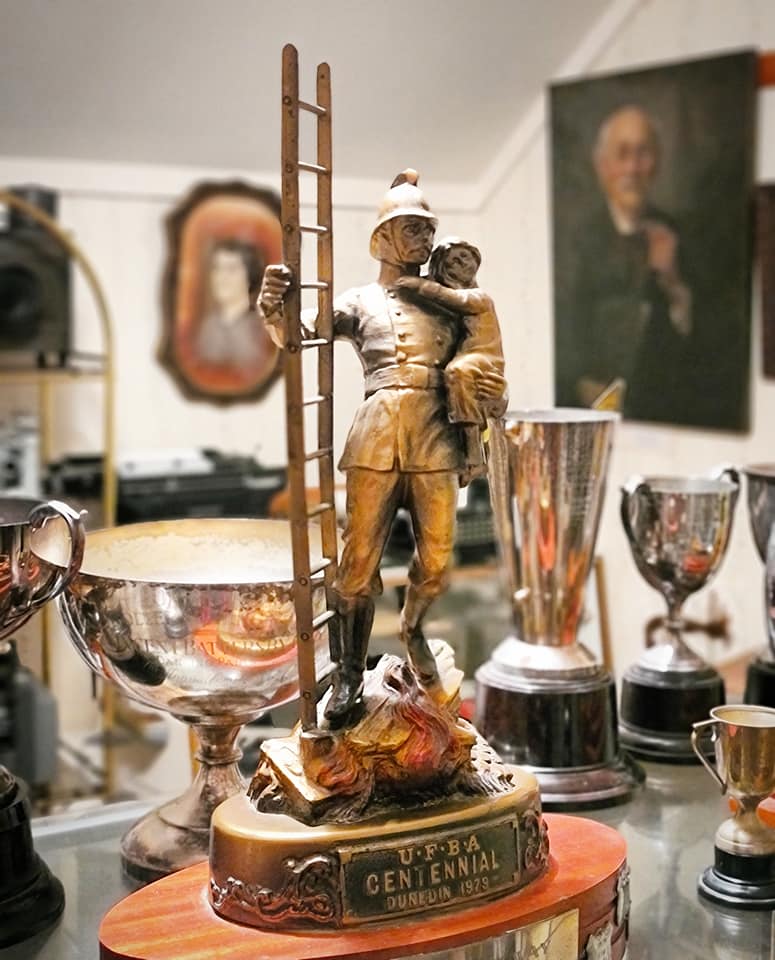 On review of my audio and video footage, I have found nothing that stands out. From the lack of activity and field data collected in the house in the time we were there and the easily explainable noises we heard, I’d have to say at this point that my opinion still stands that Laishley House might just be a ‘’misunderstood’’, or misinterpreted building; with the sounds. Internal /external appearance and general aesthetic being read as ‘’spooky’’ or even paranormal, in parts. The ‘’disorientating’’ unlevel upstairs room might also possibly play its part in explaining some of the claims of ‘uneasy feelings’, or ’’the feeling of nausea’’.

It was a good easy-going but productive investigation, very relaxed and those that attended worked well together.

It was also the first investigation for two new Haunted Auckland recruits, so a good one to start learning the ropes. We used our time wisely to test a few new pieces of equipment and try out a couple of new experimental ideas.

Though the building was quiet, and no overly unusual activity was experienced, this didn’t mean it was a waste of time – or that there is nothing there. The stories from those that have claimed experiences within the home still stand and should not be dismissed until the evidence or data to comfortably and fairly be able to logically explain said interactions is gathered.

Laishley house is a beautifully displayed and lovingly looked after piece of history and a fascinating look into early Auckland life.

Haunted Auckland recommend you pay a visit to this beautiful old piece of Auckland history when next passing through the area. 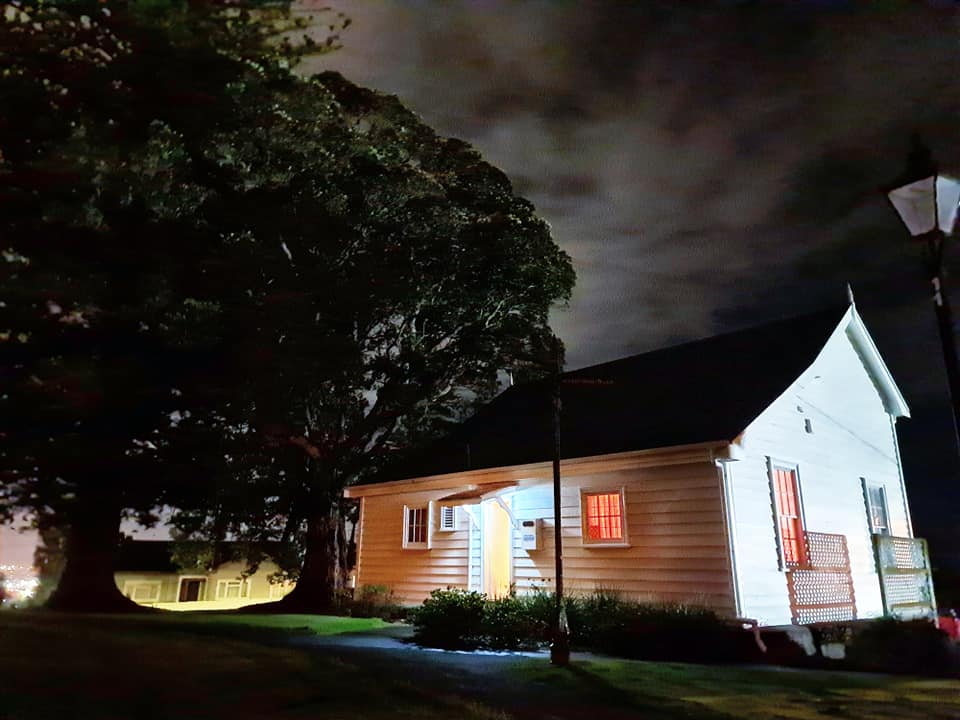