Haunted Auckland investigates the Onehunga Blockhouse to try to uncover what spirits may be residing in this nineteenth-century stronghold. The team last visited this historical local in May 2013.

We felt it was time for a follow-up. 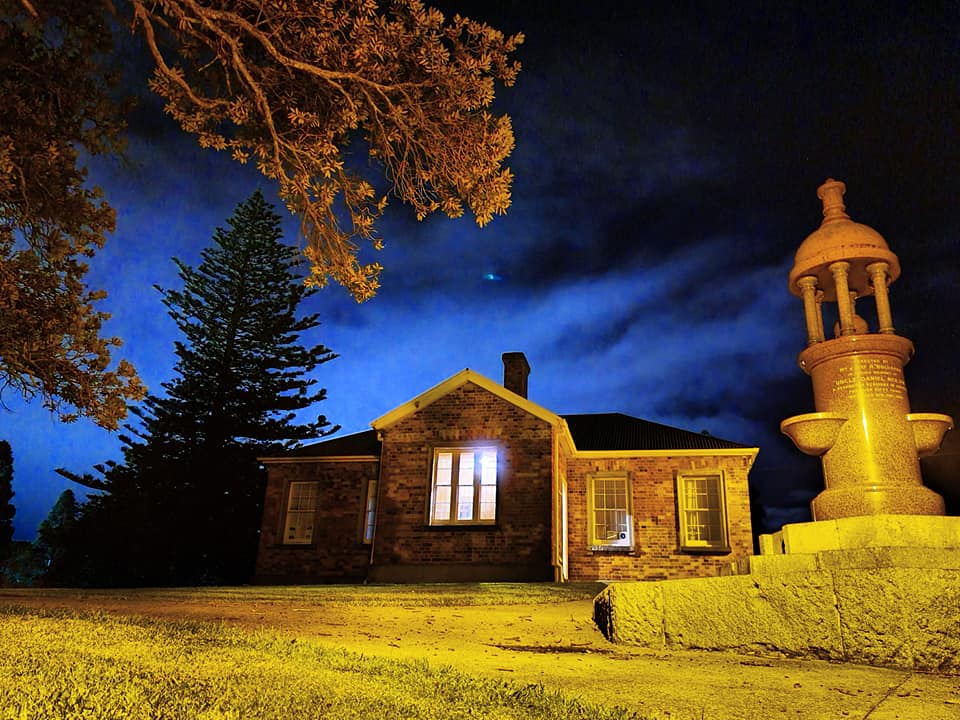 The Onehunga Blockhouse is a significant example of nineteenth-century colonial military architecture dating from the era of the 1860’s New Zealand Wars. One of few surviving blockhouses nationally and possibly the only example constructed by a public body in brick, the Colonial-Georgian style building is the sole remaining blockhouse of twelve defence strong posts built in and around Auckland in 1860. It was designed to be cruciform in shape, with sturdy brick walls 11 inches in thickness. The heavy panel doors were plated with heavy gauge sheet iron to ensure protection and sash windows provided ample light. The only weak point in the building’s defence protection was the roof constructed with Kauri shingles. However, sacks and barrels of water were held inside to be used in the case of fire. Originally, the Blockhouse had a wooden interior with lath and plaster internal linings, but the internal linings were later replaced with timber boarding. It was sited with unobstructed views over the area of the Manukau Harbour, and built with brick walls nearly a foot thick, steel-plate doors and shutters and fire-fighting gear on hand!

Blockhouse was built with symmetrically located openings, basalt windowsills, and classically derived architrave surrounds, suggesting a public structure of some importance. It was a comparatively early example of brick construction in colonial Auckland. Internally, the cruciform plan was divided into two by a partition wall and back to back fireplaces. Two smaller rooms provided covered entries. Relatively large sash windows were protected by iron shutters fastened from the inside. In New Zealand blockhouses – free-standing defensive structures erected to house guns and to protect gunners and ammunition from attack – were generally based on eighteenth-century North American designs of timber construction.

The Onehunga Blockhouse was constructed by contractor John Redwood and was given into the custody of the 2nd Battalion of the Auckland Militia on 6 December 1860. Linked with the Second New Zealand – or Waikato – War (1863-4), iron sheeting and heavy iron hinges were fixed to the plank doors in 1863. 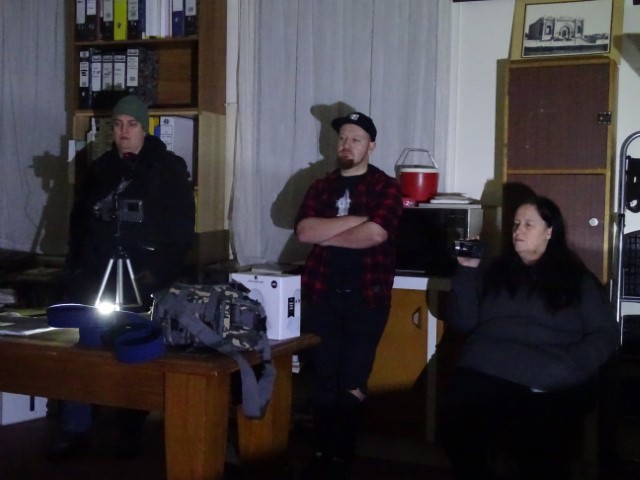 From 1863 until 1865 the Blockhouse housed twelve militia. However, it was abandoned as an inadequate defensive structure as the population of the area grew. After 1865 the building – never the subject of armed attack – ceased to have military significance and was abandoned later that decade.

From 1870 until 1873 it was rented to The Rev. G Brown, a Presbyterian minister, who used the building for a private school. It was given to the Onehunga District Board in late 1875 and let for residential use after timber linings were added in 1877. The Borough Council occupied the building from 1889 until 1892 adding extra accommodation in 1889.

The surrounding land was laid out as a reserve and vested in the Board in 1881. In the 1880’s it housed the family of the Green Hill Reserve caretaker, and from 1889 until 1892 was the Onehunga Borough Council office, at which time an addition was built. Returned to residential use after 1894, gun loopholes were bricked up early in the twentieth century. Green Hill Reserve became Jellicoe Park in 1921, a year before the Neilson drinking fountain was constructed in the Blockhouse grounds in memory of a local businessman. During the 1920’s the place was known as Jellicoe Lodge, and a bathroom was added.

Having fallen vacant in 1956, the blockhouse underwent a refurbishment completed in 1966. The blockhouse was used for meetings of the local Lions Club and the historical society and remains in use by the Onehunga Fencible and Historical Society, a tenant of over four decades.

The group arrived at the Blockhouse around 9.00pm and started setting up. Static video cameras, handhelds, positioned audio recorders, EMF and various atmospheric meters on hand to collect data. The team, a small group of four this time, spent time in each of the large rooms of the building.

Full photographic documentation of the interior and exterior were taken.

Surface and ambient temperature readings were noted in each room at two points during the session.

Communication attempts were conducted in two of the main rooms.

Audio recorders were also placed in both rooms.

EMF and ambient room temperatures were also monitored with both a Mel and Meterk Meter, for comparison.

Also being utilised for this session was our new 360 degree EVP sound recording set-up, with audio spectrum analysis software. This is an idea we are currently working on to try and move forward with our audio recordings; especially when it comes to working with EVP (Electronic Voice Phenomena) and communication / sound interaction experiments. 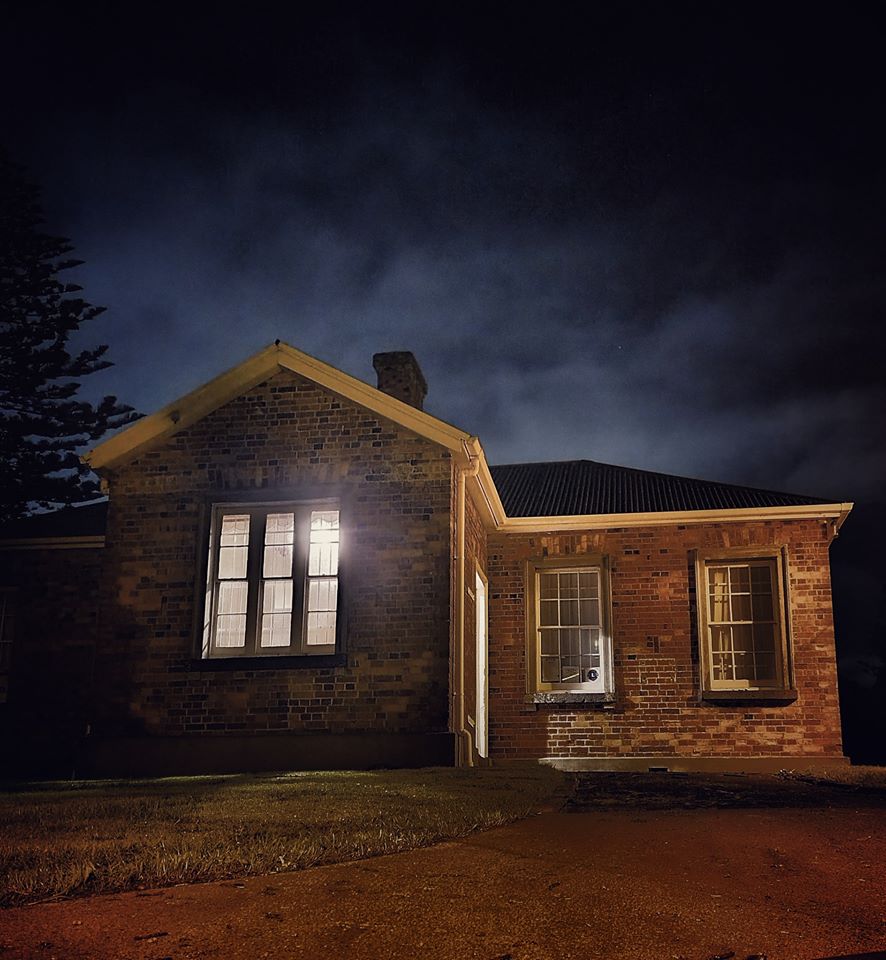 A Ghost-shaped touch lamp was used, sitting on one of the desks as a trigger object with the intention of detecting any sudden vibrations or better yet – touch.

As for unusual noises there was a constant repetitive dripping that could be heard within the room but from different areas. As the dripping appeared to come from inside the building we figure that it wasn’t a dripping pipe or guttering from outside however after a few minutes of further investigation we concluded that the dripping was likely coming from the dehumidifiers , there were two in the room which would make sense that the dripping appeared to be coming from different directions.

At one point the EDI device triggered, suggesting changes to all of its detection modes: EMF, temp and vibration. This did get our attention at the time however despite asking for the interaction to be repeated again, it never happened. Could the trigger have been caused by a draft from a gap underneath the door or could the culprit be the dehumidifier yet again, vibrating as it turns on and off and also changing the amount of moisture in the air? It’s very possible.

Mark – A quiet session all up really, with only a few light random bangs, clicks and creaks and slight temperature fluctuations. One of the EDI+ data loggers spiked a one-off air pressure / EMF change, but due to the atmospheric elements outside, i.e. wind, light rain and the cold night, I am confident these noises and slight temperature fluctuations can be easily explained away as non-paranormal events. The electrical levels within the building were normal and fine. Temperatures were also steady and as was expected. No anomalies stood out. At this point I can’t find anything out of the norm with the Blockhouse building to lead me to think of it as being haunted.

Barbara – This was building was very different layout to the original design displayed above the mantel piece. Natasha and I tried to work out where the rooms were in relation to the floor plan, but it seemed completely different with some rooms seeming to be gone and others included.

I had an empty feeling in this building compared to Laishley House but we didn’t record anything significant. There was one slight EMF and air pressure fluctuation on one of the devices, but nothing further to report. 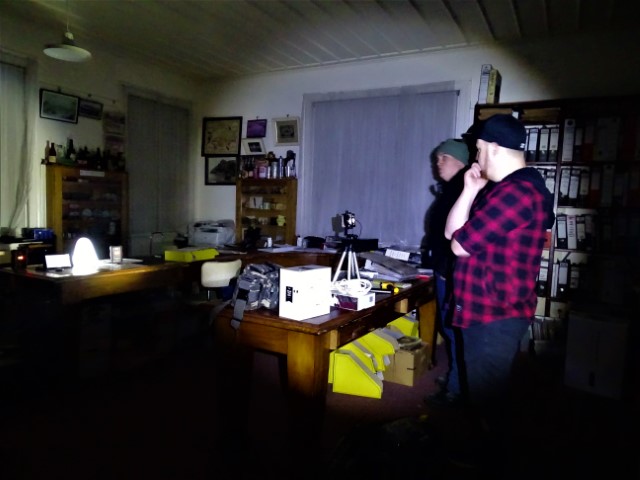 Natasha – the room that stood out to me was the Council Chamber room. This room held the majority of old records and artifacts from Onehunga. It had a huge cabinet filled will old NZ consumer products and old historical and council records for Onehunga were strewn over the huge wooden U-shaped table and various bookcases. At one point I felt a weird draft, when sitting in the corner where old household items were on display. Barbra and I really felt the cold in this part of the house.

Sam – Despite there being a few likely explanations for the EDI triggering, the fact that something did happen and the reason for this is inconclusive is enough to warrant further investigation. At the very least until the trigger can be repeated enough times to come to a logical conclusion. Does a spike in EMF, temperature, and vibrations all at the same time mean a room is haunted? No, but it is interesting, and it doesn’t necessarily happen all the time.

It was a relatively quiet night, but enough to keep the team thinking, a good first investigation for our newer members. A few questions raised and just as many thoughtful conclusions made. I’d love to return to Jellicoe Park and investigate these buildings further.