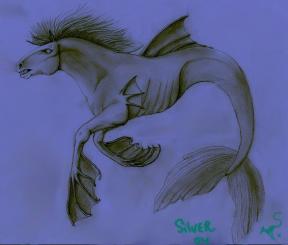 Paul Bell was a keen fisherman who I met back in early 2001 and who had a remarkable story to relate of truly monstrous proportions. And when I say “remarkable,” I’m not exaggerating. His summer 1976 encounter, on a pleasant and picturesque stretch of English canal, involved not just one breed of bizarre beast but two.

The further I dug into the story, however, the more and more convinced I became that the diabolical monsters were actually one and the same – albeit in an acutely strange fashion. If that all sounds very odd, well, it is! Bear with me, however, and all will soon become clear.

Bell told me how, in July and August of 1976, he spent several Saturdays sat on the banks of England’s Shropshire Union Canal with his rods, reels, bait, cans of beer, and favorite beef and onion sandwiches, soaking in the intense heat of what was without doubt an absolutely scalding hot couple of months.

I seriously doubt that anyone who grew up in England, and who is old enough to remember the summer of 1976, will ever quite forget those truly extraordinary temperatures that briefly, and memorably, plunged the entire nation into complete and utter scalding chaos. But it was far stranger things than the occasional extreme nature of the British weather that Paul Bell had fixed on his mind.

He told me how, on one particular Saturday afternoon, he was sat near the water’s edge on a small wooden stool that he always carried with him, when he was “literally frozen solid” by the sight of “what at first I thought was a big log floating down the cut, about sixty or seventy feet away.” According to Bell, however, it was no log; it was something else entirely. As it got closer, Bell was both astonished and horrified to see a large “dark brown and black colored” eel or snake-like creature – possibly ten feet in length or a little bit more – moving slowly in the water, with its head – that “looked like a black sheep” – flicking rapidly from side to side. Although he had an old Polaroid camera with him, said Bell, he never even thought to take a photograph. Instead, he merely stared in both awe and shock as the animal cruised past him, before finally vanishing out of sight.

I had heard similar accounts to Bell’s on several previous occasions – namely, of giant eels roaming British waterways, and particularly those of the West Midlands. In that sense, Bell’s story was not that unusual to me at all, even though it certainly involved what was without doubt an unknown animal of truly impressive proportions.

But what elevated matters to a far stranger level was the fact that Bell claimed, in quite matter of fact fashion, I have to confess, that the following Saturday he was fishing in practically the same spot when “I got the feeling I was being watched” and saw something equally monstrous – yet manifestly different in nature and appearance. It was nothing less than a large, hairy, ape-like creature!

Peering across the width of the canal, Paul was both horrified and petrified to see a dark, hairy face staring intently at him out of the thick, green bushes. The head of the animal was unmistakably human-like “but crossed with a monkey” said Bell, who added that “as soon as it saw me looking at it, up it went and ran right into the trees and I lost it.” He further explained: “That was it; a second or two was all at the most. But as it got up and ran I knew it was a big monkey. There’s nothing else it could have been. But what flummoxed me more than seeing it though, was what was it doing there?”

Within the centuries-old folklore, mythology and culture of the people of Scotland, tales are told of an infernal beast known as the Kelpie, which translates as water-horse. It’s a violent monster that spends most of its time lurking in pools, ponds, lakes and rivers, waiting to pounce on unwary walkers that pass by. It’s also a monster of distinctly paranormal proportions, one which thrives on killing the living and devouring their souls. Like the classic werewolf, the Kelpie is a shape-shifter.

Rather notably, there are three particular forms into which the Kelpie most often mutates. One is that of a horse, hence the term of water-horse. The creature positions itself by the edge of the water, doing its absolute utmost to invite those that encounter the “horse” to mount it. That, however, is always the deadly mistake of the traveler, as invariably the Kelpie then reacts in violent fashion and charges head-long into the depths of the waters, thus drowning the already-doomed rider in the process.

There are two other forms into which the Kelpie can shape-shift: one is a creature of the water (in some cases, a serpent-like monster and, in others, a mermaid-style entity) and the other is a large hair-covered, humanoid beast. This, of course, brings us right back to the matter of Paul Bell and his summer 1976 encounter. It must be said that, as incredible as it sounds, Bell’s story is highly suggestive of a relatively modern day encounter with an ancient Kelpie. After all, on both occasions Bell was situated close to the water – and given the nature of the experiences, arguably perilously close. And, at that very same water’s edge, and on the same stretch of canal, he encountered two Kelpie-style archetypes: a water-beast and a hairy, ape-like creature.

Paul Bell was, I strongly suspect, very lucky not to have been dragged to his death in the darkened depths of that accursed waterway. And with that thought in mind, I urge you to tread very carefully should you ever find yourself in the vicinity of England’s Shropshire Union Canal. The Kelpie may be coming for you too…