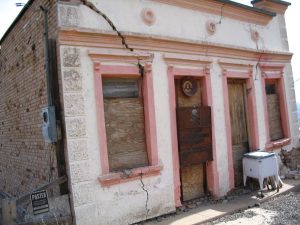 The town of Jerome was founded in 1876 in the Black Hills in Arizona USA and was once known as “The Wickedest Town in the West”. It was built on Cleopatra Hill and overlooks the red hills of the Verde Valley and was originally a copper mining camp, which grew into a settlement to support the mining industry in the area.   Jerome was once the fourth largest city in Arizona and by 1920 was home to more than 15,000 people. Production at the mines boomed during World War 1 but fell after the Great Depression. As ore deposits were exhausted and the mine closed in 1953 the population of the town dwindled less than 100.

A subsidence problem due to geological faulting in the area. Vibrations from blasting in the mine and erosion resulted in dozens of buildings including the post office and jail being lost as the ground below them sank away.   To prevent the town disappearing completely the remaining residents turned to tourism to attract visitors and new businesses to the area. Today Jerome is a thriving tourist and artist community which hosts art galleries, craft stores, and restaurants. Jerome is now known as The Largest Ghost Town in America and open businesses stand beside crumbling derelict buildings, which are slowly descending down Cleopatra Hill!

Jerome now has the reputation of being one of America’s Most Haunted Ghost Towns and there are many stories about the area. At the top of the hill overlooking the town and the fascinating ruins of buildings of a bygone era stands Grand Hotel. It has many ghost stories, but most of the buildings in the area have their own stories and ghosts. During our visit to Jerome we stayed at a lovely Bed and Breakfast, which was supposedly haunted by a cowboy-type ghost. Interestingly, although I slept like a log, my hubby was awake most of the night as he was certain there was someone watching us!!